Growing up, I was a big Cal Ripken, Jr. fan (and, thus, a Baltimore Orioles fan). This may not be all that odd, considering how immensely popular he became in the 1990s, but there are two things worth noting: 1) I grew up in central California, far away from any other Orioles fan and 2) this was the late-1980s, when Ripken was much less of a national name and the Orioles were really, really terrible. I can't say for sure why a kid from Fresno latched onto Cal Ripken, but I have a pretty good suspect: baseball cards. At the time, I was collecting baseball cards like crazy and I just couldn't get away from Cal. All-Star, Diamond King, Team Leader, Record Breaker, Top Shortstops, Iron Man… if there was a special subset of cards that year, you could bet good money that Cal Ripken was the Orioles' representative – and that I had at least three copies of it. It was inevitable, then, that I would one day announce that Cal was my favorite player and the Orioles my favorite team and there was nothing anyone could do about it.

I never wavered in those childhood years, doing my best to follow the team from 2,000 miles away in a decidedly pre-internet world. Frank Robinson, Gregg Olson, Ben McDonald, Mickey Tettleton… all were big names to me; I loved the Orioles. So, when I discovered sometime around 1990 that the team had changed its uniforms, I was very excited. Not only was this the first time I could remember a team changing its unis (teams were allowed to do that?!), but they were changing them to a fantastic new design! The bird on their hat was now ornithologically correct! 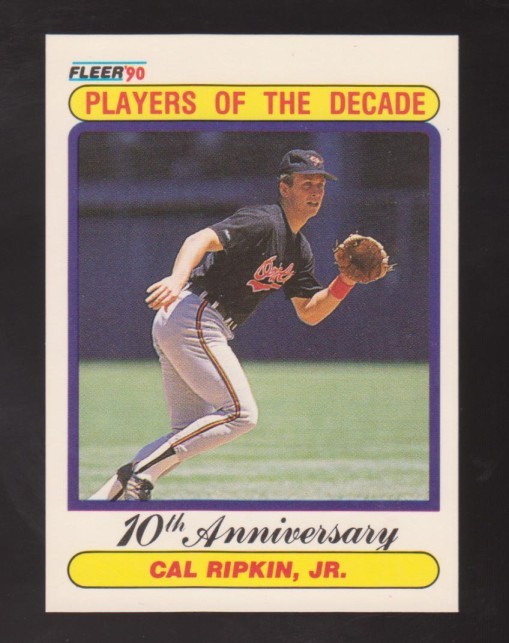 I don't remember having any strong feelings about the cartoon bird on the O's 1980s caps (or the uniforms in general), but I certainly didn't dislike it. Those white unis – with "Orioles" written in orange script across the chest – and the matching hat were exactly what a baseball uniform should look like. There was nothing silly about them like the Astros' or White Sox uniforms. But this new uniform – this new HAT – was so different… I loved it. I didn't know what "ornithologically correct" meant, but I did know that this is what a real oriole actually looked like. It was a level of realism I didn't know was possible on a baseball uniform, and it was exciting. I begged my mom for the new Orioles hat for my birthday. If I ever saw one in a store, you couldn't pull me away from it (of course, they were a little more rare to come across in Fresno than Baltimore). I don't know why, but I felt a bit of pride in rooting for the team with the best hat in baseball.

Which makes my reaction to today's news out of Baltimore feel so funny. The Orioles today unveiled their new uniform changes for the 2012 season, including an orange alternate much like those of the Giants and Marlins. The biggest change, though, is in the cap. The team is ditching the ornithologically-correct bird (refined over the last 20 years) in favor of – wait for it – the cartoon bird from their 1980s uniforms. 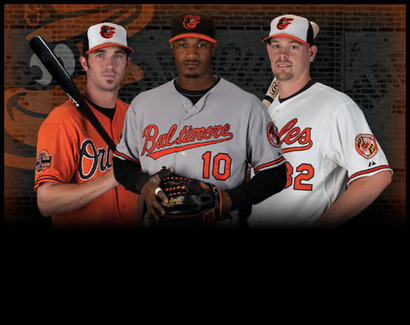 And I love it.

What is wrong with me? Am I just tired of the realistic bird because it's no longer new and unique? Am I feeling nostalgic for a uniform I kind-of, sort-of liked as a kid? Am I just a sucker for new things? Whatever it is, it has me feeling a bit odd today as I process these emotions. Still, those unis are going to look pretty snazzy on the field next year.

I like retro unis and hats - the Red Sox hat from the mid 70's as an example - but too often believe that third, alternative, special day, and retro uniforms are introduced solely to generate revenue. Leave the retro hats in the Cooperstown Collection, the old uniforms in memory, and introduce new uniforms only when a franchise changes cities. Imagine the Padres in their Brown with the padre swinging from the heels and you can envision Nate Colbert AND Will Venable (albeit from different sides of the plate). The present is connected with the past.
Reply to FrankL
Robotey
I grew up an Orioles and Colts rooter in Brooklyn in the 70's so I can understand an Oriole fan in Fresno. I met Cal at a baseball card show after his rookie year and I thought he was a god. Somehow I will always associate the bright orange tops with Game's 1 and 7 in 1979. For Game One it was the opening night celebration for the favored O's who surged ahead early on DeCinces GS and held on after I'd gone to bed. And then Game 7 when the collapse was complete and the O's brought me to tears.

What's all too sad is that while it's nice to bring back a uniform, it's no substitute for the Oriole Way and Earl Weaver and everything that made the O's dominant--if underachieving as far as championships. The O's have been suffering for so long who knows how long it will be --if ever, it seems--that they'll return to even a modicum of the glory of the late 60's and 70's.

Maybe it's a chicken or egg--do you hold off on the retro logo until the team justifies it by playing like the team that wore the cartoon bird--or do you wear the bird in hopes of reviving the franchise?
Reply to Robotey
dcj207
I agree completely. I like the retro uniforms; I'd *love* to see a retro Orioles team. Bring back the Oriole Way.
Reply to dcj207
phillsphish
uniforms are nice, good ball players in them even better. lifelong Orioles fan, spoiled at the age of 10 when the first World Series won. damn, thought they would always have great teams?! shooting for 15 years in a row, but team will look better. positive article on Orioles nice to see even though about uniforms. go O's!
Reply to phillsphish
hotstatrat
Personally, I prefer the '90 - '11 Oriole on their cap, which was a retro salute to their uniforms before the late 60s. The 1966 Champion team had the ornithological correct bird on their cap, but the Weaver teams a few years later had the cartoon bird. The original bird is less goofy than the cartoon bird, but if you are an Orioles fan in the mood to look goofy, then the cartoon Oriole is fine. The Blue Jays did the same thing this year returning from their newer sleek tasteful action Blue Jay to the goofy 1980s & 90s Blue Jay.

Both cartoon birds are a) appealing to a younger audience? b) appealing to rappers who like a goofier look? c) a nostalgic salute to those teams' best years (Orioles '69-'83 & Blue Jays '85 - '93). Thank goodness I am a Tigers fan (who never lived in Detroit - I grew up in the New York area.) Detroit has never gone to a goofy cartoon Tiger on their caps.
Reply to hotstatrat
dcj207
The '66 champs wore cartoon caps...the line drawing caps were changed after the '65 season.

Small sample size, but with Eminem and Ice Cube I think the Tigers' cap has more of a rapper following than does the O's cap.
Reply to dcj207