As the San Diego Padres and New York Yankees took the field at Qualcomm Stadium for Game 4 of the 1998 World Series, there was another baseball game of some importance being played. That night, the seventh season episode of "Star Trek: Deep Space Nine" called "Take Me Out to the Holosuite" aired for the first time. In it, the space station's senior staff (dubbed the "Niners") was challenged to a game by a crew of baseball-playing Vulcans (known as the Logicians) in what one might call a "Worlds' Series".

This premise may seem a bit off-base for the usual "Star Trek" fare, but it was established very early in the series' run (the first episode, in fact) that station captain Benjamin Sisko was a devoted fan of the sport. In the episode, Sisko is tasked with taking his crew and turning them into a fully-functioning ballclub in only two weeks time. The team ends up with 11 players on the roster – only three of whom have ever played the game before (Sisko, his son Jake, and his future-wife Kasidy). The remaining eight players must take those two weeks to learn how to throw a ball, catch a ball, hit a ball, and field a position. They must also learn the rules of the game from scratch, including such complicated concepts as the infield-fly rule and obscure terminology like "bunts" and "Fancy Dan". Everything is made worse when you realize that their opponents are a team of Vulcans, an alien race that is physically stronger and faster than the majority of the Niners. Kasidy tells us, in fact, that "a Vulcan has three-times the strength of a human." It's not exactly a fair match-up.

Sisko, however, is a Starfleet captain who, among other things, has battled Cardassians and the Dominion and dealt with the politics of a God-like race overseeing the planet that his station guards. He is even known as the Emissary of the Prophets to the Bajorans. A man like that knows how to lead a team of hardworking individuals against even the longest odds. So – how well did Benjamin Sisko actually do in assembling and managing his team of would-be Vulcan beaters? 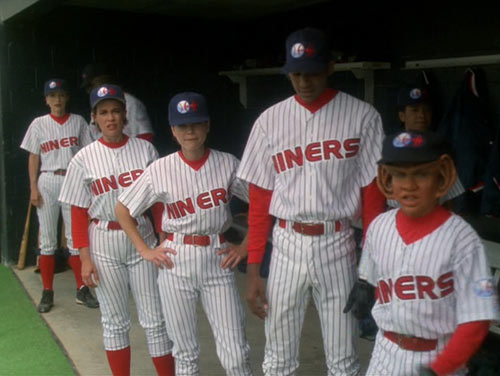 Team Analysis
A position-by-position breakdown of the DS9 Niners:

Pitcher – Jake Sisko
An easy choice for Sisko. Ben has been playing baseball with his son for Jake's entire life, making Jake the default best player on the team (and likely the only one who even knows how to pitch a baseball). However, we also know that Jake bats no earlier than fifth in the line-up. Why would you have your best hitter bat so low? It's possible that Sisko was sticking with the "pitcher bats ninth" theory of line-up construction, but that hardly speaks to his managerial skills. (Side note: the actor who plays Jake Sisko is Cirroc Lofton, a nephew of Kenny Lofton. Jake wears a Braves hat during the game in honor of Cirroc's uncle.)

First Base – Worf
At first-glance, another fairly easy choice. As Sisko reminds his team early on, there are only two players on the squad who the Vulcans are not stronger than: Worf, the Klingon warrior, is one. Assuming he has the power of a corner-infielder, it makes sense for the biggest, strongest player on the team to play first. However, it is also well-established that Worf is a tremendous athlete and can run rather well. He is not Adam Dunn. Considering his overall athleticism and strong arm, a rightfield assignment would make more sense – as would catcher (but we'll get to that in a minute). Worf deserves special mention for his contributions to on-field chatter. During a spirited round of "Hey, batter, batter! Hey, batter, batter!" by the Niners' infielders, Worf chimed in with "Death to the opposition!" Later, when Nog is confused as to what to do on a play and asks "What do I do now?", Worf answers with the Klingon-riffic "Find him and kill him!" Trust me – the delivery is perfect.

Second Base – Benjamin Sisko
The manager places himself at second base, presumably because he is most comfortable there. The best defensive play of the game – a diving stab at a grounder up the middle – comes from Sisko, so he must be pretty good. As a tall, strong man, Sisko doesn't exactly fit the physical profile of a second-baseman, especially considering that the team features two undersized Ferengi and four small-statured women. Sisko is much better suited for shortstop on this team, where he can use his fielding skills at a much more important position while continuing to be the "field general". It would also put a better arm at the position with the longer throw to first.

Shortstop – Col. Kira Nerys
It can be safely assumed that Colonel Kira Nerys is in top physical shape. A survivor of many battles, she has risen to the rank of colonel in the Bajoran military. She is very strong-willed and disciplined. Assuming that these traits make Kira physically strong enough to give her and Sisko equal arm strength despite her small stature, a player with only two weeks of baseball under her belt in her entire life probably shouldn't be given the toughest position on the field. It's possible that Kira showed a natural skill at the position, but it's hard to believe she's the better choice than Sisko. The two of them should switch positions.

Third Base – Kasidy Yates
Third base was originally supposed to be manned by Chief Miles O'Brien, who Sisko intended to "anchor the second half of our lineup". However, at some point during practice, O'Brien tore his rotator cuff. Doctor Bashir was able to repair the tear, but it still needed time to heal, forcing O'Brien to be pitching, hitting, and first-base coach. To replace him, Sisko called upon his future wife Kasidy, a freighter captain who grew up with baseball (her brother even plays on a professional team). As the third and final player with experience in the game, she fits in well at third base. Placing her in the outfield would mean that the outfield wasn't filled entirely by inexperienced rookies, but it's not a terrible decision. With Kasidy at third and Kira at short, there is some potential for Kasidy to help Kira by stretching the position a little.

Leftfield – Dr. Julian Bashir
There are two players on the Niners who are as strong as, or stronger than, their Vulcan opponents: Worf, the Klingon, and Dr. Bashir. Tall and thin, Dr. Bashir was genetically engineered/altered as a young boy, giving him a superior intellect, precise hand-eye coordination, and superior reflexes, all traits that should make him a great baseball player. Centerfield is probably the best spot for the doctor, but, considering the athleticism of the actual centerfielder, leftfield doesn't seem like a bad choice. Later, when Sisko is ejected from the game, Bashir is moved from left to second to fill in for the captain. Offensively, the doctor was given the leadoff spot in the line-up. However, the one time Bashir is seen at the plate, he strikes out on a very bad swing. He is also shown watching a fly ball go over his head and getting mixed up with shortstop Kira on a practice fly ball. It's a bit tough to believe that a genetically-enhanced individual with such spectacular reflexes and hand-eye coordination would be so bad at the sport.

Centerfield – Ezri Dax
First things first: Ezri Dax is a poor substitute for Jadzia Dax. There's just no argument there; DS9 fans will know what I'm talking about. Now that that's out of the way: Ezri Dax is young and athletic. In one of her previous hosts (the Dax character is Trill symbiont, moving from one host to another after each one dies), Dax was an Olympic-level gymnast and, while most skills don't transfer from host to host, this one seemed to. Late in the game, one of the Vulcans hit a long line drive to straight-away centerfield. Dax sped toward the wall. At the last moment, she leapt up in midstride, climbing up the wall in two steps and pushing off into a backflip at the top. She made the catch. Anyone with that kind of speed and athleticism can play center anytime.

Rightfield – Leeta
Nog's step-mother, a Bajoran who married a Ferengi. Honestly, she's only on the team so the roster can be filled with just the right number of players that the story requires (nine starters, a coach, someone to come off the bench after the ejection, and Rom, the Rudy-type figure who gets one special at-bat at the end of the game). The episode shows absolutely nothing about Leeta's baseball abilities. When Bashir moves to second-base after Sisko's ejection, Leeta moves to leftfield and the Ferengi Quark comes in to play right. Not good enough to make the starting roster, Quark is shown making a fine relay throw into first base late in the game.

Catcher – Nog
Probably the biggest question mark on the whole team. Nog is a young Ferengi who recently joined Starfleet. He is roughly the equivalent of a nineteen year-old boy. He is also about 4'11" tall, weighing maybe 100 pounds. Somehow, though, he's Sisko's starting catcher. We know he's a pretty good ballplayer (he's the only one who shows actual talent during the team's first practice), but no one that small should ever be behind the plate. Think of all the stolen base opportunities a physically-superior race like the Vulcans would have with Nog having to make the throw to second. It's hard to say where Sisko should have put Nog, though. At his size, very few spots on the field seem suitable. Second base is the first thought, but where would Sisko or Kira play? If Worf were moved off of first, Nog could go to second, Kira to first and Worf to either rightfield or behind the plate. Seeing as how Leeta would likely make a terrible catcher, Worf might be the best choice. The Vulcans would think twice before challenging the throwing arm of a Klingon.

Overall, while Sisko's team is not in the ideal set-up, it is likely pretty close. Only Nog is an egregiously bad decision and, in the Logicians' 10-1 victory, he probably factored in very little. The Vulcans' power and the inexperienced Niners' mistakes (they allowed 14 hits and committed four errors) almost certainly accounted for all the runs against Jake Sisko. I expect a lot out of my Starfleet captains, but even I know it was impossible for Sisko's crew of misfits to beat a practiced crew of Vulcans. I'm glad the episode realized that as well. 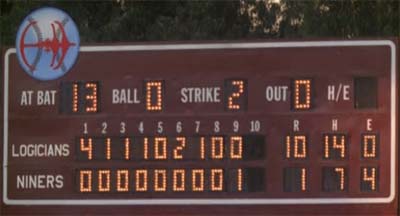 A few other stray thoughts about "Take Me Out to the Holosuite":