There were a number of questionable decisions and failures of execution during Game 6 of the World Series last night, many of which have been well-covered by Jay Jaffe and others. One of them, however, particularly grabbed my interest. Why did Mark Lowe choose to throw a 3-2 changeup to David Freese in the 11th inning? Freese drove the ball over the center-field wall to end the game. (If he had not done that, I doubt I would have taken any notice of the pitch selection.)

Lowe has fared pretty well against right-handed batters, having held them to a .233/.305/.330 batting line in 527 plate appearances across his career. He has not done that, however, by throwing them very many changeups. Changeups are typically reserved for opposite-handed batters, where they can be thrown on the outside edge, breaking down and off the plate.

Lowe's changeup is his fourth pitch. From 2009 to 2011, he has thrown fastballs, a four-seam and a two-seam version, 66 percent of the time and sliders 25 percent of the time, leaving the changeup to make up the remaining nine percent of his pitches. His changeups, however, are mostly reserved for lefties. He has only thrown 44 changeups to right-handed batters over the last three years, including the playoffs–they have made up a mere three percent of his pitches to righties, to whom he prefers to use his slider more heavily instead.

Before last night, righties had only put three of those 44 changeups into play, all for outs. No doubt he was hoping for a swing and miss with a two-strike count, and he has recorded eight of those with the changeup to righties. However, with those extremely small samples from Lowe himself, it may be instructive to look at how the rest of the league fares when a right-handed pitcher throws a right-handed batter a changeup.

Generally speaking, right-handed pitchers tend to throw fastballs or breaking pitches to right-handed hitters and avoid using changeups. The slider on the outside corner is a preferred out pitch in such situations. The slider located anywhere outside of mid-plate gets just over 17 percent whiffs on average across all counts in RHP-RHB matchups. The changeup located anywhere inside of mid-plate gets just under 17 percent whiffs in RHP-RHB matchups, making it a seemingly attractive pitch in such a situation.

However, if the batter makes contact, the slider outside has a huge advantage over the changeup inside. Right-handed batters hit for a .291 batting average and .424 slugging average when contacting outside sliders from right-handed pitchers, but they bat .336 and slug .603 when contacting inside changeups. The inside changeup is the most vulnerable pitch to the home run, nearly twice as vulnerable as the outside slider at 5.8 percent versus 2.7 percent of batted balls.

Nonetheless, perhaps if Lowe had kept the pitch down, he might have gotten away with it. In fact, that is what he said, "That's the pitch I wanted to throw. I just left it up a little bit, and he got it."

Typically, Lowe has kept the changeup down against righties: 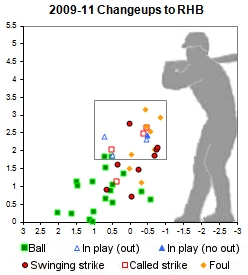 Until last night, the few times he had left the pitch up, batters had mostly fouled it off. But Freese changed that, taking the pitch, located at 2.4 feet high and -0.5 feet horizontal, deep to center.

Here is what Freese had to say about it:

"I just worked the count," said Freese, who hit a 3-2 pitch. "I was worried about getting on base, leading off an inning, taking a walk, breaking a bat, single, whatever. The full count came, and I knew he had a good changeup. So I kind of had that in the back of my head."

Interestingly, Lowe seemed to do a good job of hitting the aim point set for the pitch by Napoli's glove. 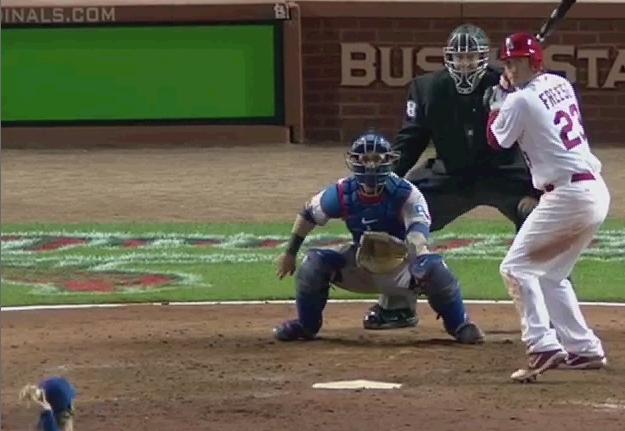 I suppose if Lowe had gotten away with that pitch, I would have never noticed what a risky choice it was.