I worked up some umpire data for Mike Ferrin and the MLB Network Radio show for the National League Championship Series between the Milwaukee Brewers and the St. Louis Cardinals, and I thought some of you might be interested in seeing the data. 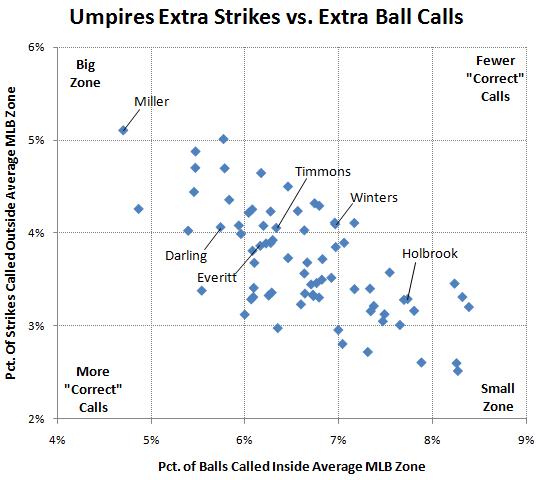 Here is the data for all the regular umpires 2010 to 2011, ordered from biggest strike zone to smallest.

We can also look at how the umpires' strike zones shifted horizontally with left-handed and right-handed batters at the plate. Here is how the NLCS umpires compare to their peers in how many strike calls they made off the plate outside past the average umpire's strike zone on pitches between 2.1 and 3.1 feet high. 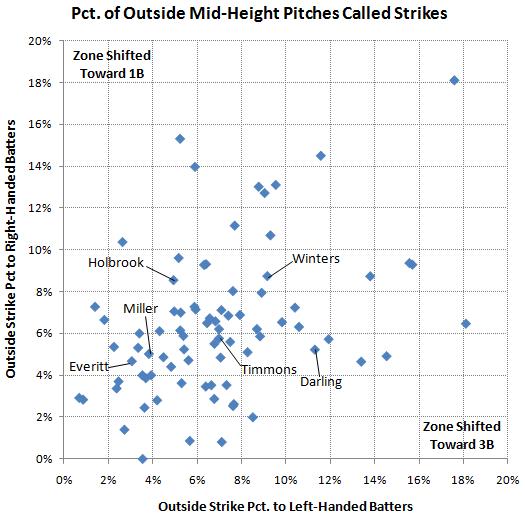 Finally, here are strike zone charts showing all the ball and strike calls made by the six umpires on the NLCS crew during the 2010 and 2011 seasons. These charts are from the umpire and catcher perspective. 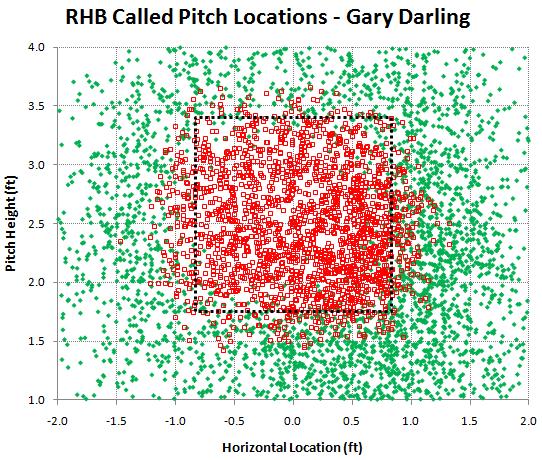 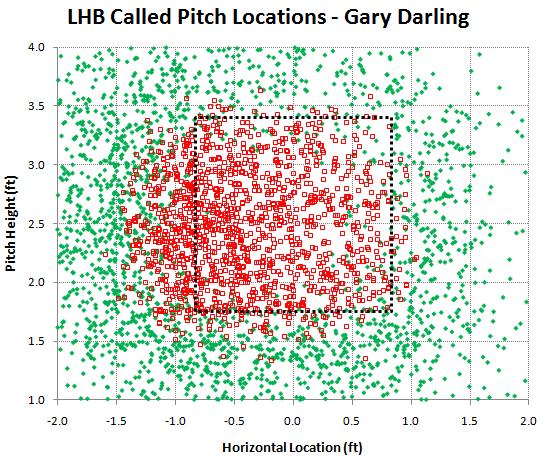 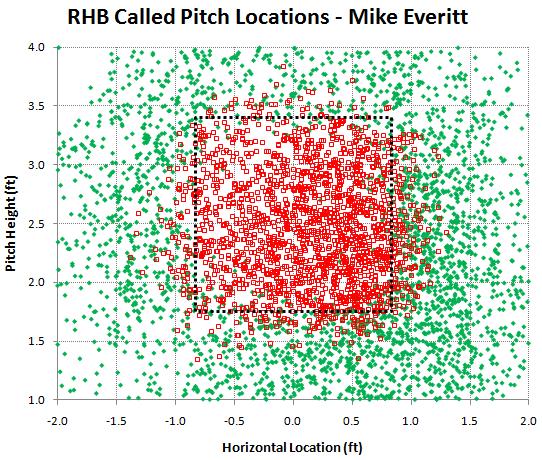 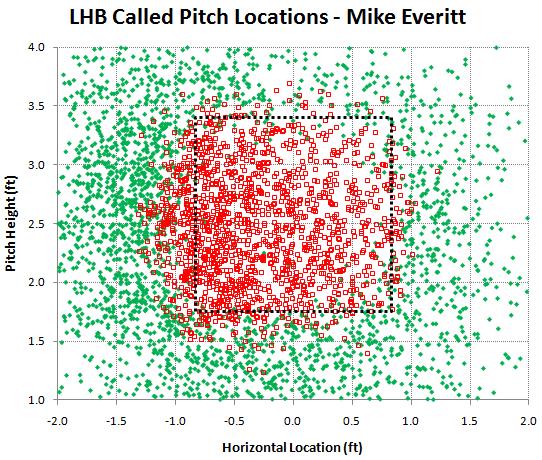 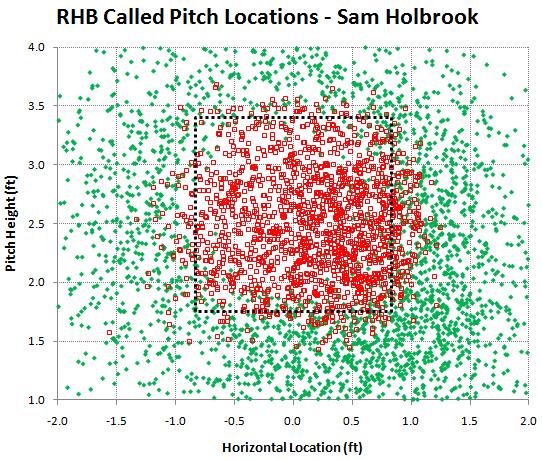 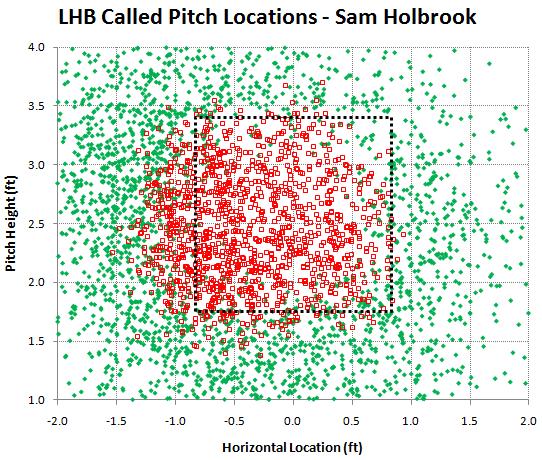 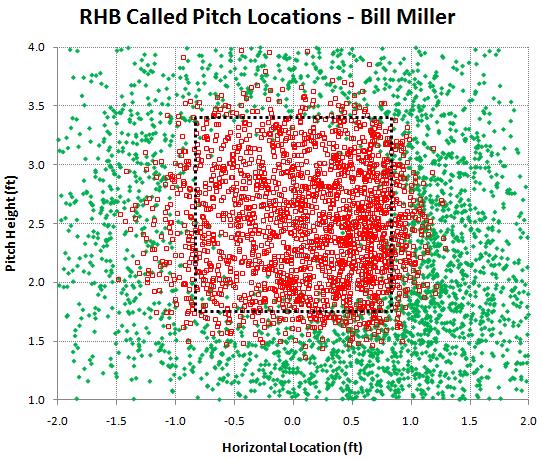 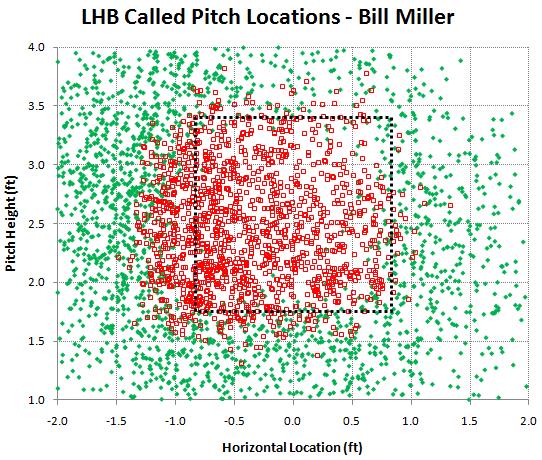 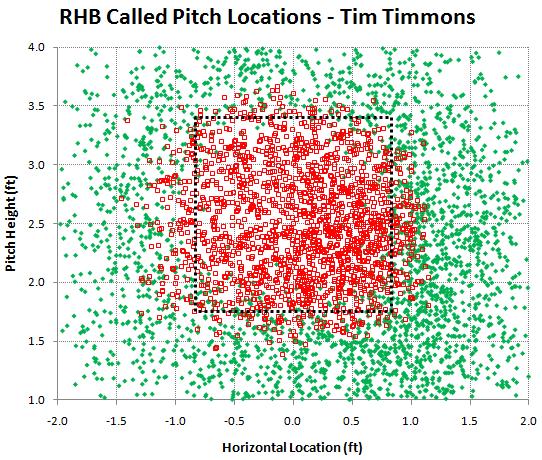 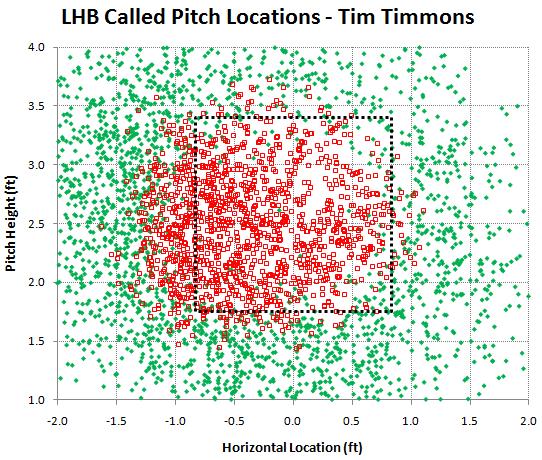 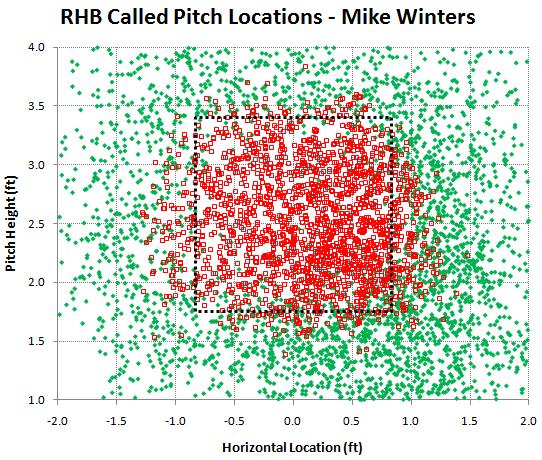 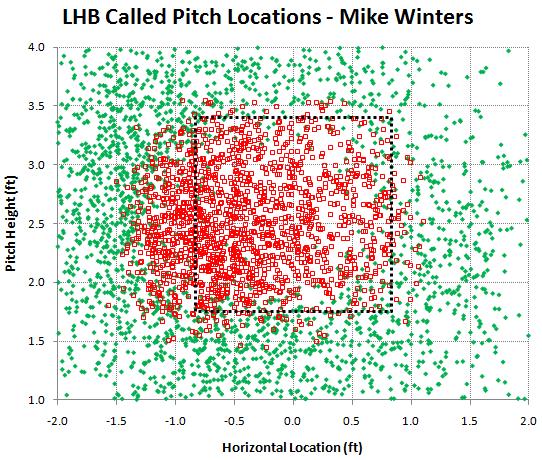 You need to be logged in to comment. Login or Subscribe
granbergt
Wow, this is awesome!
Reply to granbergt
brownsugar
Outstanding. I was wondering about Tim Welke's "usual" strike zone after last night's ALCS Game 1. Apparently the thimble was in use for one night only.
Reply to brownsugar
BillJohnson
The strike zones for left handed hitters are so consistently skewed that I wonder if there's a bug in the data presentation here. If that's really the way calls are going, then St. Louis, with its numerous LH hitters and switch hitters who will bat LH against the predominantly right-handed Milwaukee pitching, may be screwed. So, of course, will be Prince Fielder (today's game notwithstanding), but having one guy victimized by a weird strike zone is not as bad as four or five, which St. Louis may have in some situations.

Are you _sure_ those data are right, Mike? That just seems like an extraordinarily severe preference for the outside strike to lefties that isn't nearly as overwhelming for righties.
Reply to BillJohnson
mikefast
Yes, I'm sure the data are right. I'm also far from the only person to observe this. John Walsh was the first, as far as I know, back in 2007:
The Eye of the Umpire
Reply to mikefast
mikefast
By the way, if you look at the reference articles at the end of the post, particularly the first one, I discuss fairly extensively some possible reasons for the LHB strike zone shift. And it is mostly just a shifted zone, not a bigger zone. So I don't know that LHB are disadvantaged in having to defend the outside of the plate more and the inside of the plate less. LHB stand a couple inches closer to the plate anyhow, so it more or less evens out.
Reply to mikefast
BillJohnson
Wow. Thanks for the followup. I'll look at the articles.

I'm not sure, however, that I agree that the data support the claim that it is a shifted zone, not a bigger one. If a pitcher knows he's going to get the call four inches outside, he'll avoid the inside strike like it was a Uwe Boll movie. The data seem to bear this out: compare the density of dots (red or green) inside the strike zone near the inside corner to the density beyond the outside corner. Then repeat the exercise for RH hitters. Of course, it would be better to do this looking at actual, numerical information rather than density of dots. Is that available anywhere?
Reply to BillJohnson
mikefast
Bill, I'm not claiming that everything perfectly evens out for LHB and RHB in terms of the strike zone, just that it mostly does so.

Now, of course, as you point out, the pitch distribution matters, too, not just the 50% point. But the average pitch location that LHB see is about 2.4 inches farther outside than the average pitch location to RHB, and the strike zone is shifted by about 2.2 or 2.3 inches. There's a bit of a chicken and egg problem there for determining cause and effect, but for simply describing what we observe, the strike zone shift follows almost exactly with the pitch distribution.

As to whether this information is available anywhere, I don't think it is, other than in the raw PITCHf/x format. (There have been a lot of articles written about the strike zone, so I might be forgetting one where someone has shared some of the pertinent data, but all those authors were basically doing what I'm doing, which is downloading the raw PITCHf/x data and putting it into their own database for analysis.)
Reply to mikefast