You’ve probably heard the joke opening that goes something like this:

Person one: “Things are so bad for… right now.”
Person two: "Well, how bad are they?”

From there, person one will offer details and the joke carries on with some improvisation until the audience or the comedian tires of the gag. Let’s try this out with the Boston catchers:

Things are so bad for Jason Varitek and Jarrod Saltalamacchia right now.
How bad are they?
Varitek allowed Casey Kotchman to steal a base over the weekend.
How bad is that?
It’s akin to crashing your car into a unicorn, in that you won’t ever forget the scene but no rational person will believe your retelling.

Okay, now onto the real gist of the piece: things are so bad for Jason Varitek and Jarrod Saltalamacchia right now. How bad are they? Bad enough that Buster Olney tweeted this on Monday:

Tampa Bay stole 11 bases in 14 attempts versus BOS in four games. Rival evaluator: “I’m not sure why everybody doesn’t run against (Boston)."

How bad is that? Really bad, because teams already run on Boston at a higher rate per stolen base opportunity than any other American League team, and yet some in the game think runners should be acting even more aggressive against them.  The ineptitude of Saltalamacchia has resulted in a league-leading total of passed balls plus wild pitches, while Varitek’s defensive reputation remains bipolar and a battleground. The hoi polloi point to his intangibles, leadership, and game-managing skills, and everyone else steals bases off his elongated release, scattershot throws, and poor framing.  As mentioned, teams run on Boston a lot. Just check the numbers:

Conversely, here are the teams ran on the least often:

For the most part, those teams and names aren’t too surprising, with the possible exception of Mike Napoli. (One thing to consider in Napoli’s case is that 33 of his 52 starts at catcher have come with a southpaw on the mound.) Reputations have the tendency to stick with players on defense even as their skills improve or deteriorate, so to see the general perception of these catchers’ throwing games come across in a correlated manner with team’s stolen base attempt rates against them is jarring.  Are the reputations really that accurate, or is there something else in play?

Take Varitek again. Not once throughout his lengthy career has he thrown out more than 30 percent of attempted thieves. Not once, and yet teams didn’t start running on him at will until recently: 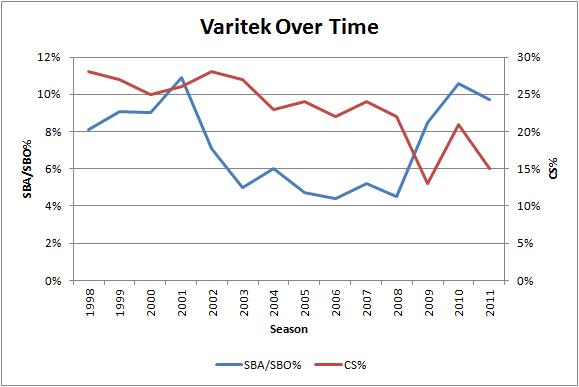 It’s anyone’s guess as to what changed in 2009 that caused teams to begin running wild on Varitek. Maybe his arm worsened, maybe he worked with pitchers who were slower to the plate then in the past, maybe the situations called for it, or maybe the quality of opposing baserunners improved. If it takes that many years for a reputation to change, then that would explain why teams didn’t seem to flinch despite Varitek’s caught stealing rate returning to its 2004-through-2007 form in 2010.

You can see delay in cases where the catcher has improved his throwing game, too. Nick Hundley has worked on making his throws to second more compact, and the results bear that out, as his catch rate is up from 29 percent to 36 percent—one of the eight-best rates in the league this season—yet teams still try and try again to run on him.

Stolen base attempts are up on a league-wide basis, so it shouldn’t come as a surprise that most of the catchers with 500-plus stolen base opportunities in 2010 and 2011 have seen an increase in activity—most notably Rob Johnson, Rod Barajas, and the aforementioned Hundley. Meanwhile, only three catchers have seen their attempt rates drop by one percent or more—Napoli, Miguel Montero, and Kelly Shoppach (who has the benefit of working with James Shields). Overall, though, it does not appear that there is a silver bullet to explain why teams elect to run more often on certain teams outside of the usual circumstances.

How bad are things for the Red Sox? The Padres don’t care to hear about it.

You need to be logged in to comment. Login or Subscribe
newsense
Did Varitek start catching Wakefield more in 2009?
Reply to newsense
alangreene
Hundley actually has a pretty good arm (which I think is backed up by decent CS%). Some of his pitchers aren't great at holding people on, but my hypothesis would be that the SB Attempt % has more to do with the run environment than Hundley's rep.

Or is that the just Padres %? If so, Hundley's been hurt much of the season and the backups really aren't ML catchers.
Reply to alangreene
Behemoth
It would be interesting to expand this work a bit, and try to eliminate factors such as the opposition (for example, the Rays run more than just about any other team in baseball - how much does playing them 18 times a year affect the results), and the pitching staff (people run more against Boston because Wakefield is pretty easy to steal off, whoever is catching). Also curious whether there is much of a difference between different catchers on the same team - how much more do people run on Varitek than Saltalamacchia, and so on?