As a fan of a team in the American League East that isn’t the New York Yankees it pains me to admit that there’s something mythical about the most winning team in baseball history. Whether we grow up to be lovers or haters of the Bronx Bombers it’s seemingly impossible to escape the more fantastical elements of the franchise.

We’ve all heard the stories and seen the footage. From Babe Ruth to Derek Jeter, the history of the storied organization has more in common with a fantasy novel than a typical sports team. This isn’t more evident in anything other than the speed with which the newest incarnation of Yankee Stadium has gone from a regular baseball diamond to a place of legend— a place of legend with 16 elevators, one washroom for every 60 fans and a cup holder for every seat in the general seating bowl. 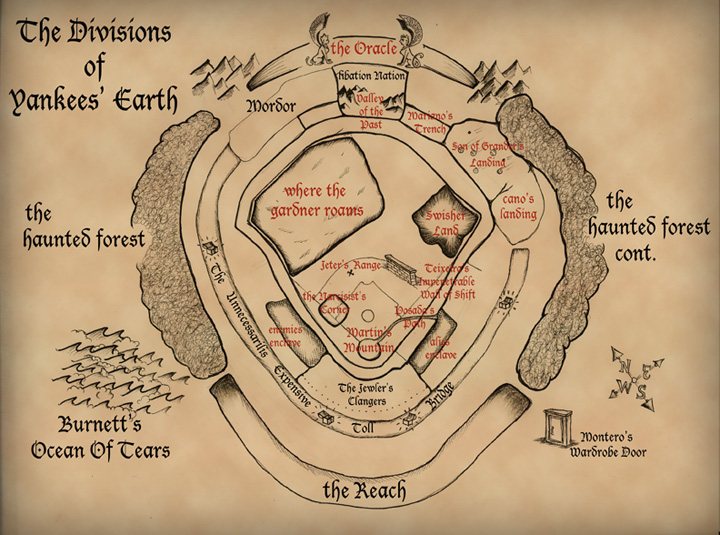 Dustin Parkes is the editor of The Score’s baseball blog, Getting Blanked. He’s very much in debt to Miranda McGuire for the illustration.

You need to be logged in to comment. Login or Subscribe
jj0501
So...who's the Grey Wizard ? Joe, Cashman, or a Steinbrenner ? This is excellent.
Reply to jj0501
dianagramr
this NEEDS to be on a t-shirt .... PLEASE?
Reply to dianagramr
rawagman
Well played, Parkes.
Reply to rawagman
EricMeeker
Jeter's Range. +1
Reply to EricMeeker
crperry13
This makes me happy.
Reply to crperry13
crperry13
On second glance, I just noticed "The Oracle" at the top. Bringing anything Neverending Story into baseball is golden.
Reply to crperry13
jhardman
This is absolutely fabulous. I hope it is registered as your intellectual property because it can/will be sold on t-shirts and scrolls in many souvenir stands nationally. I'll buy one.
Reply to jhardman
GFunk911
It doesn't need to be registered to be his IP, but for best practices, he should add a (c) symbol to the image and then register it with the copyright office.
Reply to GFunk911
redsoxin2004
NICE!

Reply to redsoxin2004
Johnston
I must not be in the target audience. I thought it was silly.
Reply to Johnston
Jquinton82
Not silly... Its well crafted if you know the Yankees, and this is just my take 1) Where the Gardner roams, is so expansive bc of Garnder's range. 2) The Haunted Forest serves as a reminder of what was loud and for the most part packed in the old stadium (even if perhaps missed placed in my take). 3)Posada's path leads inevitably to the bench (please see batting avg and OBP for clarification or numerous rants by fans about not calling up Montero as better option at DH) 4) The Narcissist Corner.. how the hell else would one - even a Yankee fan, describe ARod? 6) Burnett's Ocean of tears?... I could go on. I happen to think its on the witty and cheeky side of things... marking Jeters range with an X as if to imply he has no range and is stuck to a fixed position like some pirate treasure on a map is great... not trying to be condescending bc I myself could be horribly off...
Reply to Jquinton82
greenday8885
Well done. As the Yankees are clearly the Lannisters of baseball, we need a map of "Steinbrenner Rock".
Reply to greenday8885
yankee
Great and the perfect ending to my day.
Paul
Reply to yankee
Johnston
I still find it silly, and I know George. (No, not Steinbrenner, Martin.)
Reply to Johnston
jlebeck66
I don't have time for nonsense like this... I have to get back to reading The Silmarillion.
Reply to jlebeck66