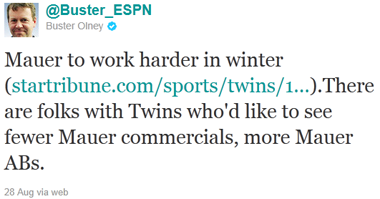 Personally, I'm glad to see that Mauer is planning to work harder this winter to improve his conditioning. There is nothing more disappointing than seeing someone as talented as Joe Mauer constantly sitting out games thanks to weird, nagging injuries. It robs the fans and the sport of something special. I think the anonymous attack on Mauer's commercials is unfair, though.

We all know that traveling around with numerous film crews in order to be ready to shoot a live commercial anytime any station around the world needs their fix of Joe Mauer can be a tough thing – especially since Troy Polamalu is part of those film crews, always whipping his hair back-and-forth – but Mauer has really turned it into a science.

Mauer's schedule has him arriving at the ballpark at the same time as the rest of the team everyday. He heads into the locker room just like everyone else. Sometimes he spends the morning kidding around with the kids in the locker room, playing PS3 or cards. Other days he heads to the weight room or the batting cages, always looking for some way to get better. With some pitchers, he spends the time going over video and discussing their game plan for the night. He's a professional.

In none of these instances do the commercials get in the way. When it's time to shoot the live commercial, Mauer gets a short page. He quickly pauses whatever it is he's doing – the MLB: The Show game he's playing with Denard Span, the squats bar he's been working on all morning, the video of Jose Bautista he's been discussing with Carl Pavano for the last 30 minutes – and heads into the Joe Mauer Studio, located just off the Twins clubhouse (the team even constructs a temporary studio in each stadium while on the road). Mauer has performed these commercials so often this year that he's rarely gone for more then two minutes at a time. He can fall into his Troy Polamalu voice at the drop of the hat and his patented hangdog "yes" is even better to see in person. Mauer has got these commercials down pat. They're quick and simple and could not be less intrusive.

Yes, it can be a little worrisome when the commercial page comes in while Mauer is in the middle of a game, but, being the professional that he is, it has yet to affect a game. Mauer flies through those halls between the dugout and the Studio like Usain Bolt. Some players take longer to use the toilet between innings than Mauer takes to shoot one of these commercials.

Joe Mauer is still the best player on the Minnesota Twins this year. Sadly, injuries have sapped much of his usefulness in 2011, but that should change next year. Mauer is too young and too good to let these aches and pains bother him for too long. Anyone trying to blame Mauer's commercial schedule – a unique set-up that allows him to film every commercial live from the ballpark's Joe Mauer Studio – just doesn't know what they're talking about. There is no less intrusive filming set-up in all of baseball, and Mauer works hard to make that so. Claiming otherwise is wrong and does a disservice to one of baseball's biggest stars. If you want to get upset at Mauer's sub-par 2011 due to his lack of health, feel free to do so. Just keep the commercials out of it.

A little voice in my mind says, "Overrated, Overpaid, Injury-Prone baseball celebrity thinks you should use this shampoo."

I find it a little sad that only a couple of his eight major league seasons have truly had noticeable impact, but he's treated as a superstar by the media and fans.

Them's fightin' words, and I'm sure some people will have a problem with them.
Reply to crperry13
SamVan
How much does a guy have to hit before you will take his advice on shampoo and/or video games?
Reply to SamVan
mcilvafr
Do I need to grow some hair before I can use his advice for shampoo?
Reply to mcilvafr
crperry13
Career 300/400/500. His hitting is not up to my hair standards. Good question, though.
Reply to crperry13
crperry13
Go ahead, minus me. You know you don't have a good reason.
Reply to crperry13
hyprvypr
Clearly the park has played a major part in Mauer's perceived struggles. He's not going to be a .330/.420/.500 guy, at least not most years but there's no reason, once again healthy, that he can't play 100 games at catcher, 30 at 1B and 20 elsewhere while putting up seasonal lines closer to .300/.400/.450. A lot to love from a good defensive player behind the dish.
Reply to hyprvypr
markpadden
Target Field has played about as neutral as a park can be, so that's not a valid factor. And his defense at catcher is average.
Reply to markpadden
SamVan
cool, as long as you've got standards.