Mike Fast here. The summit has started. The webcast is available here for those who want to follow along online like I am.

10:05am PST. We've started with a promotional video from Sportvision, and now Sportvision's Ryan Zander has come to the podium.

Sportvision announces a partnership with SmartSports with the smart cage system, will be equipped with PITCHf/x and HITf/x. Will be rolled out starting this fall. Introductions for Steve Zoppi, CEO, and Joe Miller, VP of engineering. –MF

10:11am. Graham Goldbeck, data analyst at Sportvision, former intern for A's and Rays, is presenting on "Trading Pitch Speed for Command." COMMANDf/x measures the location of the glove at the time the ball is released and the target end point, using the PITCHf/x tracking cameras.  It is measured in the plane of the catcher's glove, not at the front plane of home plate.  I have wondered how well SV can adjust for the catcher moving his glove forward or backward between pitcher release and catcher catch, in other words, if the catcher's glove changes plane.

Graham did not address this facet here, or really very many details at all about how COMMANDf/x is done. How well some of those details are addressed could have a big effect on the accuracy of this data, and I'm disappointed to see it not addressed at all. With previous product introductions, PITCHf/x, HITf/x, and FIELDf/x, Sportvision spent a lot of time explaining what they were doing and fielding questions about how the system was setup, and that gave us a lot of confidence in the data and knowledge about what to be careful for.  Hopefully there will be a chance to get into more of that during the question period.

Ugh, I'm very unimpressed with some of the answers from the Sportvision folks here.  I'm not getting a warm fuzzy that they know what they're doing with COMMANDf/x. If I were a potential customer for this data, I'd have A LOT of questions for them before I'd accept the accuracy. They are claiming that most catchers have the glove 2 feet behind the point of home plate, which doesn't seem correct from what I've measured, but also no discussion about how that varies among catchers and various pitches and how that impacts the accuracy of the measurement. They are killing my confidence in the value of this product. That or this product is in very early beta stage, which I guess could be a possibility. But even for a product in that stage, like HITf/x and FIELDf/x at previous summits, they've had a much better handle on explaining the technical challenges that they had overcome and were still grappling with. There was very little of that here. –MF

11:00am. Jeremy Greenhouse here. You may know my name from such promotional videos as Sportvision's. That video was one of the most absurd things I've ever seen. I swear at the end of it, Ryan Zander flew out of the screen to begin the summit. What an entrance! Promotional videos are silly by nature, so nothing against Sportvision, but wow. I thoroughly enjoyed it.

Also liked Graham Goldbeck's presentation and preliminary work with COMMANDf/x (hope I don't upset Mike by saying so). However, I didn't like how Mr. Goldbeck fielded questions. If I were up there, I would have gotten a bit more confronational. You've got to flip the tables on them, Graham.

I prefer the F/X Visualization stylings of Dave Allen, but I appreciate what Kevin Dame is trying to do by bringing more intuitive visuals to the masses. Dame says that he's done research along these lines for one of the four major sport leagues. I figure any time you refer to them as the "four major sport leagues," you must be talking about hockey. –JG

11.13am. Mike Fast here again. Infographics aren't really my thing, so I've sat out commenting on this section. I'm more of an Edward Tufte guy, I guess. If you want to follow on Twitter, the hash tag for the summit is #fx2011.

As far as COMMANDf/x goes, I certainly don't hate it. I think it has great potential. I just haven't gotten the confidence that Sportvision is doing a good job with the technical challenges involved or with understanding the data. Of course, those two go hand in hand. –MF

11.18am.  Alan Nathan is presenting now on data from the Women's College World Series for softball. Typical flight time for a softball is about 0.4 seconds, which is similar to a top-end major league fastball from 60 feet. Average release point is below 2 feet, which means that ball usually rises.  Alan is showing the pitch repertoires for a few softball pitchers. The first one is Ms. Henderson; she has two pitches, a fastball that drops and a breaking pitch that is slower and rises. Now Ms. Thomas has a fastball and changeup (I guess) which both drop, a breaking ball that rises, and a mid-speed pitch. And then Ms. Dunne, with maybe five pitch types. Interesting. I had no idea softball pitchers could have that many pitch types. Actually, I had no idea of what softball pitchers threw at all, other than that they threw underhanded. –MF

11:42am. Knuckleballing underhanders could be the new market inefficiency.  –JG

11:40am. Matt Lentzner is presenting on plate discipline. –MF

11:48am: They put Lentzner on right before lunch, and so of course he's talking about the pitching donut and BACON (batting average on contact). My heart goes out to the attendees who have to be getting hungry by now. –CW

11:50am. I think that some version of what Matt did with dividing the zone into three groups (true strikes, pitcher's pitches or borderline, true balls) is what I would like to do with my zone stats. But I also think that may vary with pitch type. Breaking balls and changeups different than fastballs. And it wouldn't necessarily apply the same for grading umpires. –MF

12.04pm. They are breaking for lunch. The summit will start back up at 1:15pm Pacific with a talk by Max Marchi on catcher defense. –MF

12:25pm. My takeaway so far: While some, like Matt Lentzner, use Sportvision data merely as a means to disprove the theory that Brett Gardner is baseball's most and only perfect player, others manage to see beyond the data. Underhanding knuckleballers. A quatrillion-dollar idea.

Very much looking forward to Max's presentation on catcher defense, although I may have to question his objectivity if Mike Napoli turns up near the top of his rankings. –JG

1:27pm. Max Marchi is making an excellent wholistic presentation on measuring catcher defense and disentangling the effect of other players on blocking pitches, the running game, and framing pitches. I would very much like to see the slides for this one as well as to see Max's historical data for catcher defense. –MF

1:50pm. Max Marchi's presentation was fantastic. My favorite part was when he blatantly called Tom Tango out. He was all like, "WOWY? I got your WOWY right here, son." Max Marchi likes his models the way he likes his martinis and martial arts. Mixed. The man is a force of nature. –JG

2:00pm. Hillary Superak is presenting on graphical techniques for PITCHf/x data using R. Her presentation is similar to her master's dissertation at Emory University, which is available in PDF format here. –MF

2:17pm. Alan Nathan will be taking the podium again in about 5-10 minutes to discuss batted ball trajectories using HITf/x, TrackMan, HitTracker, and FIELDf/x prototype data. This is my personal most-anticipated talk of the summit, so I'll either be taking notes furiously and you'll hear nothing from me until it's over, or I'll be filling up this space and Twitter with all my thoughts. –MF

2:39pm. Alan is talking about different ways to model a batted ball trajectory–piecewise constant acceleration, a constant-jerk (12-parameter) model, or a full non-linear model. He is proposing a modified nine-parameter aerodynamic model, using initial positions and velocity, constant drag coefficient, and backspin and sidespin. This could be revolutionary. –MF

3:24pm. Alan spoke on two topics on which I have previously worked closely with him. He talked about the change in drag coefficient from baseball to baseball and about a splitter that Freddy Garcia threw on April 29 that broke the opposite of the way it should have moved based upon its spin. I can probably expand on both these topics in more detail at some point if people are interested. –MF

Alan did not talk about how to estimate backspin and sidespin from the HITf/x data. I believe this is possible, but it must be a topic for another day. Alan also presented more data on fly ball carry, showing that the stadiums with the most carry were Denver and Texas, and lowest were Cleveland and San Francisco. –MF

3:33pm. At this point we are getting a presentation on Korean baseball. There are currently four PITCHf/x installations in Korean baseball stadiums, and more are planned. The Korean Baseball Organization has nine teams. The Sports2i.com company is still developing their PITCHf/x back-end database, so the Korean PITCHf/x information is not currently available online. –MF

3:54pm. Greg Rybarczyk is now presenting on fielding metrics based upon FIELDf/x data. Greg shows data for 155 air balls tracked by FIELDf/x, with the distance from the nearest outfielder versus the hang time. He shows only about 11 of those balls as being in doubt as to whether they would be fielded or not, which seems a very small proportion. It would seem to imply that the impact of outfielder range is negligible, unless I'm misinterpreting something. –MF

4:35pm. I'm including a fuzzy screen grab from one of Greg's slides here. It shows distance that an outfielder traveled to get a ball versus the hang time of that ball in the air. He's colored the outs blue and the safe hits red. –MF 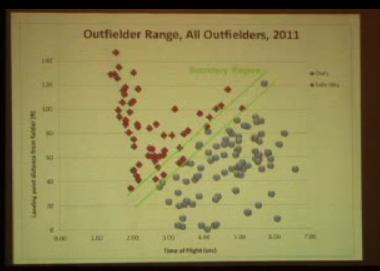 4:46pm. Greg is still presenting, but I'm going to check out here. I had a great time participating by webcast and Twitter. Hopefully I can be present in person at the next one. – MF

Regarding the percentage of air balls in doubt, that actually seems about right to me. If we can take the sample of 155 air balls at face value, 11/155 is 7% of fly balls in doubt.

Let's take an excellent fielding CF (call him "Bourjos" for the purposes of this thought exercise), and assign him catches for all of the balls in doubt. Bourjos makes about 2.5 PO per 9 innings.

155 air balls is a relatively small sample (again using for 2.5 PO per 9 innings, that is about 60 games). Maybe the true percentage for balls in doubt is really 7%; maybe it is 8% or 9%. But 30 to 40 extra catches by an elite CF compared to a relatively poor CF sounds about right to me.

Reply to brownsugar
mikefast
Yeah, on second thought that's probably reasonable, especially considering that Greg had subtracted out the effect of positioning to get to that graph.
Reply to mikefast