As October gets closer and closer, baseball fans have some shopworn sentiments to trot out:

Players and teams that perform well down the stretch are viewed as clutch, because later on in the season the games allegedly matter more. But do they really? And has the wild card really drained the drama from the stretch run?

Logic would suggest that the number of games you win matters far more than the order in which they are won—to the extent that games late in the schedule seem more important, it’s because it’s far more apparent at that point how many games a team needs to win in order to make the playoffs.

So, games later on in the season can be more dramatic—for teams that are in the race. But for many teams, the race ended back in late May or early June, and late-season games aren’t exciting at all. Therefore, the “average” team sees a lot more excitement early in the season, because with only a few games on the books, nobody can put together an insurmountable lead. What’s interesting to note is that as you progress through the season, you see fewer and fewer average teams—teams will move to one end of the spectrum or the other fairly quickly, and teams in the middle are rare to nonexistent.

There are two reasons for this. The first is that teams that get out to a lead early tend to be better than teams that fall behind early. Notice I said tends—there are certainly good teams that stumble out of the gate and recover (like the Red Sox this season, for instance.) But they’re less common than teams that stumble out of the gates and then continue to stumble for the rest of the season. If you give better teams a lead, they tend to hold onto them; they don’t even have to play better than the other teams the rest of the way, because they already have a lead. The other reason is that teams in contention behave differently—they make deadline deals, they’re more likely to start the service time clock of a top prospect if he fills a need, and so on. Teams out of contention are more likely to deal away players for prospects and to try “playing the youngsters” in preparation for next season.

How does adding the wild card to the mix change things? The obvious effect is that more teams make the playoffs, and so more teams are competitive in some sort of playoff race later in the season. This means the average change in playoff probability for any given game is higher—introducing the wild card increases the average change in playoff probability for a single game from two percent to three percent. 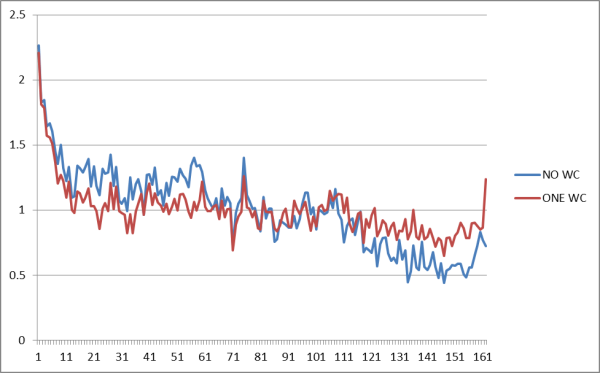 Looking just at a team’s division odds, we see a pronounced dip right around the 120-game mark, following a long and steady decline. After introducing the wild card, we still see the long and steady decline, but instead of plummeting after 120 games, the volatility in playoff odds stays much steadier through the end of the season. Looking at the last forty-two games of the season, there’s roughly 20 percent more movement in a team’s playoff probability with the wild card than without it.

So if one wild card makes late-season games more interesting, what would a double wildcard do? If we assume the second place wild card team would have also gotten a playoff berth, we can look at how our leverage index shifts: 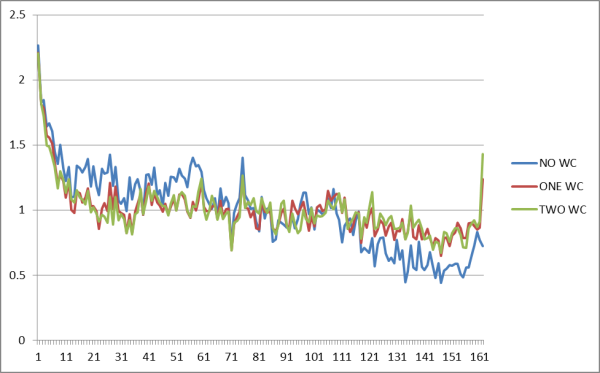 Having a second wild card tracks very closely with having a single wild card; you end up with additional playoff teams, so in that sense a larger number of fans are invested in the playoff race. But in terms of uncertainty of outcome, a second wild card would have no effect; it wouldn’t increase the impact of late-season games relative to early-season ones.

You need to be logged in to comment. Login or Subscribe
nosybrian
Colin, I've got another way to think about this. Why would fans go to a ball game? Maybe the drama or the criticality of the game to their home team's chances of getting to the playoffs isn't the most important factor. For sure, we know attendance is greater for teams that are contending, or that contended or reached the playoffs the previous year. But there are still reasons why people go to games even by noncontenders, especially if the quality of play is good and the management seems to care to put quality players on the field.

I have in mind the research by demographers who calculate the "value of children," and who conclude that the cost is almost always greater than the expected return. Yet people do (deliberately) have children even with such a negative financial return.

Attending a ballgame is expensive -- tickets, transport, parking, comestibles, souvinirs. And these days most games can be witnessed for a lot less money than it costs to actually go to the ballpark. This is one reason for the popularity of sports bars and cable subscriptions. Yet tens of millions of fans bear those costs of actually going to the ballpark. And some of us even take our adult children to games and pay for their $12 premium beers.

I suggest that the fans' motivations for attending games fall into a number of categories, several of which have little relationship to the criticality of a game to their team's reaching the playoffs. I'll list some of these, not in any particular order of priority.

1. To entertain their kids or their family, buy some "peanuts and Cracker-Jack," catch some rays, "get away from it all." In short, for "recreation."

2. To participate in the public spectacle of "America's pastime." Join the crowd, their friends and neighbors in watching a ritual competition. Be part of a crowd, be sociable.

3. To see great play or players, perhaps records being made or storied heros coming to town, a pitching ace or league leading or record-making opposing player.

4. To reward or entertain clients or business colleagues.

5. To hang out with your buddies -- perhaps to get away from the family or the spouse and do a bit of carousing.

6. To slake your thirst for rivalry, to show your loyalty when a particular team comes to town to challenge your "home team," even if that team is not itself a contender or the game is not critical to the home team's record. Or, in some cases, to travel in order to show loyalty to your home team when it has an away game against a hated rival. You attend the game not just for recreation but to fight for your side against the enemy.

In sum, sure we like to root for a winner. But there's plenty of reason for to choose to go to a game even to watch losing or "league average" play.
Reply to nosybrian
rawagman
I have long wondered about the tipping point for when a stadium can go from having swathes of empty seats to sell-out or near sell-out status.
I am thinking about Malcolm Gladwell's book "The Tipping Point". At a certain point, when a given attendance number is regularly reached, it becomes an event not to be missed by more than just the die-hards. Do different cities have different tipping points? Can we see this in attendance drop-offs as well? Once the stadium is less than X% full, does it start to drop more rapidly? I think this may be critical information for a given team to have in knowing how much to push itself forward.
Reply to rawagman