Anyone who doesn’t think that competition raises performance levels would do well to take a look at the American League East. For the last decade, the division has housed the two best teams in baseball. More recently, with the ascent of the Tampa Bay Rays, it’s seen three highly successful organizations in close competition, not just for the division crown, but also the American League Wild Card. In fact, the consolation prize for the best team not to have won a division has been collected by a team other than the Boston Red Sox or New York Yankees only once in the last eight years.

And now, the Toronto Blue Jays, with the acquisition of Colby Rasmus from the St. Louis Cardinals at the cost of some young pitching and spare parts, have signaled to the rest of the division their intention of joining the elite of the league.

It’s almost enough to make you pity the Baltimore Orioles.

In a little less than two years, general manager Alex Anthopolous has drastically improved the Blue Jays organization through a willingness to spend large amounts of money on elite talent in the draft and the international free agent scene and by including cash considerations in trades to increase the team’s return in prospects.

While building a highly-ranked system, Anthopoulos hasn’t ignored the active roster. When not collecting potential Type-A and-B free agents like a dog catcher bringing in strays, the Blue Jays GM has bought low on potential star players in Brandon Morrow, Yunel Escobar, and now Rasmus, right after they had fallen out of favor with their old organizations.

It’s not merely thrifty spending—it’s also proving to be, perhaps surprisingly, the fastest way to build a team capable of competing in the toughest division in baseball. Maybe even scarier than the organization’s quick rise up the rankings is that this type of financial discipline is being practiced by a team owned by the wealthiest ownership group in the game, in a city that ranks as the fourth biggest major-league market, and in a country where they’re the game’s only representative.

When thinking of Toronto’s franchise, imagine the Tampa Bay Rays, with their extra 2% philosophy and their layers of prospects, but with the added bonus of having the financial wherewithal to round out their roster through free agency when necessary and keep the elite talents that rise through their system on the team instead of on another team’s wish list.

That’s all well and good for the future, but just as being the only team in Canada gives the organization the potential to reach a larger market, it also creates a finicky fan base whose national pastime involves sticks and boots with knives, not leather gloves and wooden bats. It’s been 18 years since the Blue Jays were last in the postseason, and an average home attendance that ranks as the seventh-worst in baseball accurately reflects how fans feel about that.

I mentioned the Blue Jays’ increased spending to build their organization, but I also wrote about the team’s enormous financial backing. It’s becoming increasingly difficult for the fanbase to compare Rogers Communications’ quarterly profits with the team’s annual payroll. At some point, the Blue Jays are going to have to spend some money on the players, and the question this offseason will be whether they’ve reached that point.

With the best batter in baseball locked up for the next four seasons, the makings of a very strong supporting cast in players like Rasmus, Escobar, Travis Snider, Brett Lawrie, and Adam Lind, and young pitching that hasn’t quite reached its potential, is this offseason the time to strike? Is a Prince Fielder and/or C.J. Wilson the type of free agent who can put the Jays among the elite teams with whom they so obviously want to compete?

Colby Rasmus may be only one player, but the timing of his addition and the solid foundation that his new team currently boasts makes this acquisition a potentially frightening one for the rest of the division.

When I think of the American League East next season, I recall that scene from Jurassic Park in which Samuel L. Jackson balances a cigarette between his lips and warns his fellow survivors to “Hold on to your butts.”

I opened this piece by suggesting that the Blue Jays were signaling their intent with the Rasmus trade, but it might not be much longer until that intent becomes a reality.

Thought Of The Week
Say what you will about how difficult it is to win in the American League East, but at least there’s no confusion over what to do at the trade deadline. In almost any other division in baseball, the Tampa Bay Rays, and to some extent the Toronto Blue Jays, would have to wonder whether or not they should be buyers or sellers at this point in the season. When the Boston Red Sox and New York Yankees are this far ahead of you in the standings, though, that decision gets a little bit easier, and that’s likely a good thing for those two teams going forward.

Popular Guys
According to Baseball Reference, these were the five most frequently visited profile pages this week among active players now in the American League East:

Words To The Wise
Finally, here’s what some of my favorite blogs in the American League East were talking about this week: 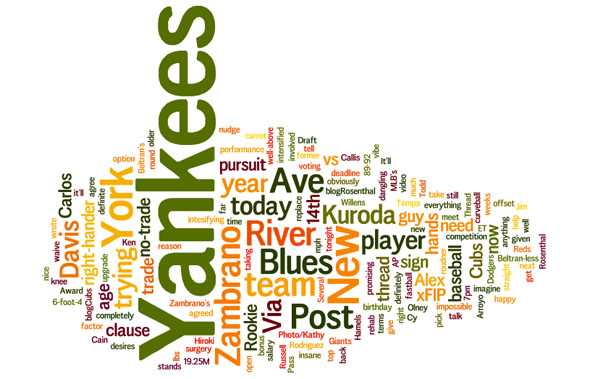 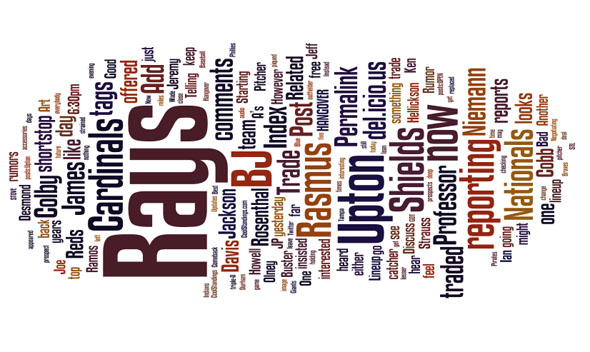 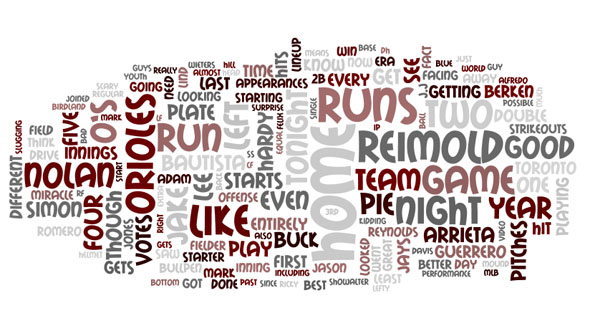 Dustin Parkes is the editor of The Score’s baseball blog, Getting Blanked.

You need to be logged in to comment. Login or Subscribe
mlsgrad99
I like the visual display of what's hot on the blogs. Wonder if it's possible to edit out the name of the team and the blog, though?
Reply to mlsgrad99
delasky
Enjoying your writing Mr. Parkes.
Reply to delasky
Shkspr
Oh, I don't think editing out the name of the blog and team is desirable at all. For instance, look at the relative unimportance of the Jays and O's in their footprints. If we were to see similar patterns with basement dwellers in other divisions, that might lead to a theory that the more a team name is mentioned in a team blog, the better the job the team is doing in the minds of the writers. Meanwhile, a deemphasized team moniker might signify a fanbase's apathy over the day to day won-lost record, while instead focusing on discussion of the merits of individuals.

Camden Chat's seeming inability to focus on a single topic this week and the River Ave. Blues's narcissistic focus on self referentiality swamping any kind of game related discussion are the two most intriguing takeaways for me in these footprints.
Reply to Shkspr