While putting together this summer's squad of Replacement-Level Killers, I noticed something alarming. It's been an awful year for third basemen, both in the number of marquee players who have served time on the disabled list and in terms of their overall offensive production—so bad, in fact, that as a group they're being outhit by second basemen, and are basically even with shortstops. The dreaded Chone Figgins’ return to the hot corner isn't enough to explain this phenomenon, so again I must ask: Just what in the name of Larry Wayne Jones is going on?

For starters, let's turn once again to Bill James' defensive spectrum, which runs 1B-LF-RF-3B-CF-2B-SS-C. The positions at the left carry the least defensive responsibility and generally have the best offensive production, because teams can draw from the widest pool of players to fill those slots; if you can rake, you can play first base. (In case it's not clear, designated hitters belong even further to the left of first basemen.) Meanwhile, the positions at the right carry the most defensive responsibility, drawing from a shallow pool of players who generally manage the least offensive production.

When I covered the topic a couple of years ago using final 2008 numbers and Clay Davenport's version of Equivalent Average, the positions matched up almost perfectly (DH excluded) with the defensive spectrum. The ebb and flow of talent from position to position and year to year means it doesn't always happen so neatly, as this graph, which uses Colin Wyers' version of what's now called True Average, shows. Remember that True Average adjusts for park and league scoring levels and centers at .260, so all of the year-to-year scoring fluctuations come out in the wash. 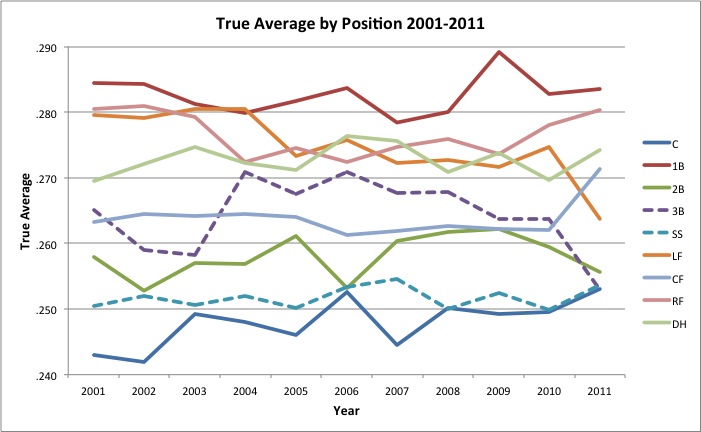 Aside from the DHs, that's not too far from the Jamesian template; below first base, you have the corner outfielders inverted but separated by just a few points, and center fielders a couple points ahead of second basemen, with shortstops and catchers bringing up the rear. Just over halfway through the 2011 season, things are much more helter skelter:

Center fielders outhitting left fielders, second basemen and shortstops outhitting third basemen, earthquakes, volcanoes, Pirates in first place, dogs and cats living together—it's been that kind of year. That last column in the table shows the change in True Average relative to last year; basically, it's left fielders and third basemen that have taken the fall in a major way.

Inge you already know about; he was a Replacement-Level Killer due to his combination of illness and weakness, and McGehee earned a Dishonorable Mention. Elsewhere, we have relatively unestablished players coming back to earth after partial 2010 showings of questionable sustainability (Betemit, Johnson, Valencia), some of them even banished to the minors (Alvarez, Nix). We have once-established players going from bad to worse, quite possibly playing themselves out of the majors (Mora, both Lopezes).

Perhaps most importantly, we have some of the position's best and brightest suffering through injury-riddled 2011 seasons—Longoria (oblique), Rolen (shoulder), Wright (back), and Zimmerman (abdominal surgery) have all done stints on the disabled list, with all but Rolen's lasting at least a month; Wright has only just begun a rehab assignment after missing more than two months. None of them have produced at the elite levels they managed last season, and with the exception of Rolen—who's been backed up by the surprisingly resilient Miguel Cairo (.280 TAv)—all were replaced by much-inferior scrubs. Expand the list a bit further and we could also include Chipper Jones (knee surgery) and Placido Polanco (back), both of whom have dropped by 15 points. While we're at it, note that Inge, Nix, and Alvarez have all served time on the DL in 2011 as well.

Meanwhile, only six players have improved by a similar magnitude:

The historically awful Wood had nowhere to go but up after his trials in Anaheim. Sandoval and Ramirez have rebounded from lost seasons in grand fashion, the former by shaping up (though he too was bitten by the injury bug, needing surgery to repair a broken bone in his hand), the latter by staying healthy for a rare change. Reynolds, despite his low batting average and noted contact woes, is nearly as productive as he was in 2009 (.296 TAv) after an off 2010. Also rebounding nearly to 2009 standards (.280 TAv) is Callaspo, who's more or less the antithesis of Reynolds, a contact-oriented hitter with narrow secondary skills. Headley is the one player here who appears to have taken a legitimate step forward, as he's never posted a TAv higher than .270.

Looking at it from a different vantage, among the third basemen in last year's pool, an alarming 10 of the top 21 in True Average have served time on the disabled list, with Longoria, Zimmerman, Wright, Casey Blake, and David Freese all spending at least a month on the DL this season, and Alex Rodriguez destined to reach that level as well. Again, each has been replaced by hitters of vastly inferior quality, with the Dodgers (Juan Uribe, .208) and Nationals (Alex Cora, .212) most notably polluting the waters. Add to that an unfortunate migration (Figgins, .200, after playing second base last year) to offset the arrival of Kevin Youkilis (.330), plus a couple of underperforming rookies of varying pedigrees (Brent Morel, .215; Mike Moustakas .204), not to mention the Indians' mistaken notion that Jack Hannahan (.243) was somehow an everyday player, and you can start to understand how the position-wide performance has dropped so precipitously.

The other side of the coin is what's happening at shortstop. Jose Reyes (.331) has rebounded from two injury-plagued seasons and returned as one of the game's most electrifying players. Jhonny Peralta (.316) has moved back to shortstop and hit like it was 2005 all over again. Asdrubal Cabrera (.302) has become a star, and Yunel Escobar (.301) and J.J. Hardy (.294) have rebounded from injuries. On the other hand are the declines of Hanley Ramirez (.264), Derek Jeter (.260), and Rafael Furcal (.168), a return to normal suckitude for Paul Janish (.213), the desiccated remains of Edgar Renteria (.222) and Alex Gonzalez (.221), and the improbably awful Reid Brignac (.176). Overall, they're up an unremarkable four points this season, right in line with their annual undulation between .250-.255.

With Zimmerman, Wright, and Longoria at least likely to heat up somewhat once they're further away from injuries, my guess is that by the end of the season the relative production between the two positions will normalize, but I wouldn't be surprised if it's a smaller gap than usual. We still have four weeks of Eduardo Nunez replacing Alex Rodriguez, after all.

You need to be logged in to comment. Login or Subscribe
rawagman
Much like he is a "One Man Gang" in carrying teh Blue Jays, I wonder if, given more time at the hot corner, Jose Bautista can bring 3B offense back to its rightful place.
Reply to rawagman