As I mentioned on Friday's Tater Trot Tracker post, I've been away from Baseball Prospectus (and most everything, really) for nearly the last two weeks on vacation. As someone who grew up in California (and who has many family and friends out there), but who hasn't visited in nearly six years, the Terrific Girlfriend and I were due for a nice long trip across the state. The fact that SABR's annual convention happened to be in Long Beach that week just made it all the more perfect.

As a first step back into the swing of the baseball world, I present to you some notes, observations, and things learned while away on my summer vacation:

This isn't exactly news to anyone from the Valley, but, no matter how pretty Chukchansi Park is – and it is a very nice stadium – 108 degree weather is just too damned hot to go watch a baseball game outside, even on the 4th of July. I really wanted to get my first taste of Fresno Grizzlies baseball in six years while I was in town, but that "Welcome to summer!"-weather that Fresno likes to throw in your face the first weekend of July was just too much. I did check out the stadium, though, and it's as nice as I remember. If you're ever in the area, I suggest checking a game out. The Grizzlies also happen to do terrific stuff in the marketing department. 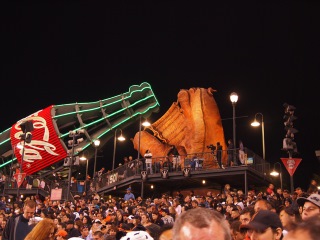 No matter how nice the stadium in Fresno is, it still feels very minor league compared to one of baseball's true gems, AT&T Park in San Francisco. Not that that is any kind of surprise. I've always enjoyed my visits to Pac Bell Park and its derivatives. Of course, this was my first visit since the San Francisco Giants became World Champs for the first time, and it did seem a bit different. We went to a game on a Tuesday night, the day after the Fourth, against the lowly Padres. In most parks, that's a recipe for a small crowd. At AT&T, it may well have been a Sunday night or Saturday afternoon against the Dodgers (fistfights excluded). The crowd was big and loud and showed genuine excitement in the game. They even sang along loudly to Journey's "Don't Stop Believin'" without so much as a single lyric on the screen. I can't decide if "impressive" is the right word for that or not. 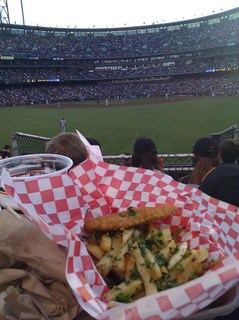 Our seats at AT&T Park were in the centerfield bleachers and it was a surprisingly fun experience. I never know how I'm going to feel when I take in a game from the outfield bleachers. Sometimes, like in Chicago's U.S. Cellular Field, it doesn't even feel like you're in bleachers. Other times, it can be a bit of a chore with all the drunk college kids in your section (Miller Park is like this on occasion), while still others it can be flat out intimidating (like Dodger Stadium and Wrigley Field, for very different reasons). The AT&T crowd was fun and only slightly obnoxious and actually watched the game. I enjoyed the taunting of Cameron Maybin, especially since he was having such a good game.

That said, the guy who jumped out of the bleachers and tried to tickle Aaron Rowand deserves whatever the stadium police gave him. I know he didn't actually harm Rowand, but it was a bit disconcerting to look over and see a guy running directly at the back of an oblivious ballplayer. I couldn't help but think about the two guys who jumped the rail and attacked that umpire a few years ago. Brian Wilson was warming up in the San Francisco bullpen at the time; I was a bit disappointed he didn't do his best Todd Coffey/Ultimate Warrior impression and run down and tackle the guy. I'm not 100% against fans running on the field, but only because it's harmless fun (as long as the guy is willing to spend a night in jail). Going at players, though, is a completely different thing. 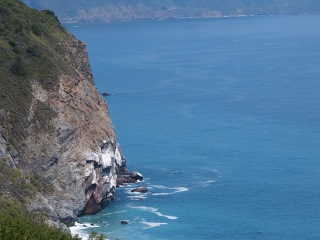 The drive down the Pacific Coast Highway, from San Francisco to San Luis Obispo, while very pretty, is also a bit more stressful than people let on. It adds a ton of time to your trip (like 2 to 3 hours) and that time is spent navigating very tight turns on the sides of very tall mountains. If you're not prepared for 80 straight miles of this at 30 miles per hour, like we weren't, it takes a lot of the fun out of it. Of course, two weeks later, we only really remember all the beautiful parts of the drive, so it must have been worth it.

I still love Dodger Stadium. The crowd was pretty small for a Friday night game and the Loge level concourse could be a little more spacious, but it's tough to argue with how perfect the game's presentation is at Dodger Stadium. Blue sky, downtown Los Angeles behind you, mountains, palm trees… it's the postcard version of baseball. 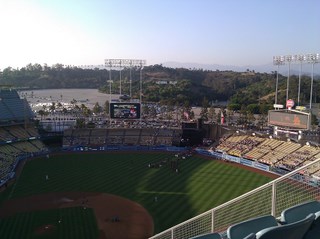 The Dodger Stadium crowd was much louder than I expected. The game against the Padres was only interesting in the eighth and ninth innings, but the crowd didn't seem to mind. "Take Me Out to the Ballgame", for example, was at least as loud as it is in Wrigley Field. Of course, for some reason, everyone there seemed to think Andre Ethier was a much better player than Matt Kemp. That was weird. 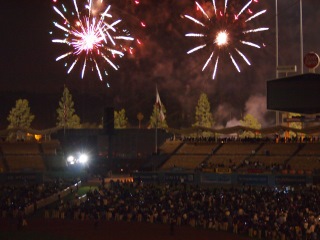 I took my mother and grandmother to the Dodger game with us. Neither of them had been to Dodger Stadium (or a Major League game for that matter) in almost thirty years and they had a blast. The fact that Dodger Stadium felt practically unchanged since 1983 probably helped (as did the impressive postgame fireworks display). I found it strange to think that Dodger Stadium was barely 20 years old the last time they were there and now it's the third-oldest park in baseball. It was even stranger to find out that the one time my grandmother visited Wrigley Field it was as new then as, say, the SkyDome is now.

Derek Jeter will do anything to get me back to the Tater Trot Tracker. Too bad he didn't follow Wade Boggs' example and kiss home plate. That would have been good for about 32,000,000 words around the web just that first night alone.

The SABR convention was as fun in year #2 for me as it was last year, even if I did miss its signature moment in Scott Boras' keynote speech. Watching Padres GM Jed Hoyer talk about his job while his team was throwing a scoreless no-hitter was a unique experience, and hanging out with a bunch of smart, interesting, and pasty baseball fans and writers made the nights interesting. Next year's conference will be in Minneapolis (with 2013's in Philadelphia) and should be just as great. 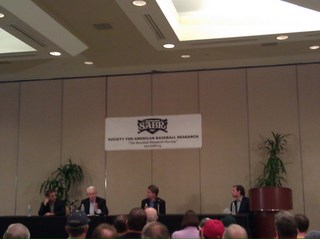 Finally, being in the Phoenix airport for ten whole minutes while the All-Star Game is going on four miles away isn't as fun as it sounds. Thankfully, we did get to see Prince Fielder's home run from the air as we took off. Well, I like to pretend we did, at least.

The vacation is over now and the second half is upon us. Things should get back to normal around here this week – that is, if you can consider anything to be normal when the Pirates are in first place at the start of the second half.

You need to be logged in to comment. Login or Subscribe
harderj
Thanks for the travelogue, Larry. As a kid from near Fresno and a huge Giants fan, I enjoyed your descriptions and accounts of your visits there (even though you didn't catch a Grizzlies' game).

Absolutely right on the trip down Highway 1. It's a good bucket list kind of thing, but it's hard driving. I did it solo in a rented Mustang convertible once, with the top up the whole way against the rain.

There were still fans at Dodger Stadium when the game got exciting in the eighth and ninth? With attendance down, perhaps it's become a more baseball-first crowd than the streaming-for-the-exits stereotype.

Anyway, thanks for a good read.