When filmmaker Guillermo del Toro is creating a monster for a movie, he follows a four-step process. First, he focuses on the silhouette—the broad, basic shape that imparts general information about the creature. From there, del Toro works on the creature’s movement, then its color, and finally the rest of the details necessary to flesh out a convincing creation. Building an analysis of a baseball skipper can follow the same sequence of steps, and with Davey Johnson hired over the weekend as the Nationals’ new pilot, the time is ripe to discover whether Washington has a managerial monster at the helm.

Since we’re beginning Johnson’s professional biography with the broad strokes, we can start with his win-loss records in his previous stints as skipper. Looking at a team’s records under a particular manager as well as just before and after his arrival and departure offers an overview without providing much context. We’ll get to the context in time, but first, here’s how Johnson’s teams fared with him:

And now, in a cheap With or Without You (WOWY)-style analysis, how those teams fared in the seasons before and after Johnson’s employment. The Johnson Effect—if there is one—is noted by the winning percentage differential year-to-year. If Johnson took over a team that won 90 games every season but won only 60 the season prior because of a rash of injuries, then saw the team recover to win 90 again with perfect health, this method gives him credit for improving the team, regardless of his actual effect.

Johnson has won more than half his games as manager, distributed across four teams and more than 10 seasons. Those results are admirable, even without knowing the processes behind them. That’s the next step; to remix Winston Churchill’s quote, “However beautiful the results, you should occasionally look at the strategy.”

The Movement and Color

Reactions to Johnson’s laid-back demeanor serve as a litmus test. If folks are okay with it, then Johnson’s team is likely winning ballgames. If folks are up in arms, then Johnson’s team is likely underperforming (or winning but located in New York). Johnson is known for dabbling in statistical analysis and even tried delivering the gospel of stats to the venerable Earl Weaver way back when. Stories like that are amusing, but they also have the tendency to buy managers free passes in sectors of the sabermetrics community.

In the relatively brief time that Baseball Prospectus and Johnson coexisted in the baseball world, much of our analysis was positive, but it rarely encroached on what made Johnson unique or worthwhile. That’s not a fault of the authors—it’s still quite difficult to peg down what makes a manager good—but there was a notable absence of strategy talk. The most illuminating observation might stem from a sentence in this article from 2000:

Davey Johnson called for more steals of third base, and more double steals, than any other manager last season.

The three areas in which the manager tends to have the most control are a team’s stolen base attempts, sacrifice hits, and intentional walks issued. Comparing those statistics across the entire league can be tricky, as the National League’s barbaric mandate to have pitchers bat means that intentional walk and sacrifice hit totals can be skewed upward. To adjust for this, I measured Johnson’s teams against their own league only, as the graph below shows. The multi-colored line below the x-axis is used to differentiate between Johnson’s tenures with each team. 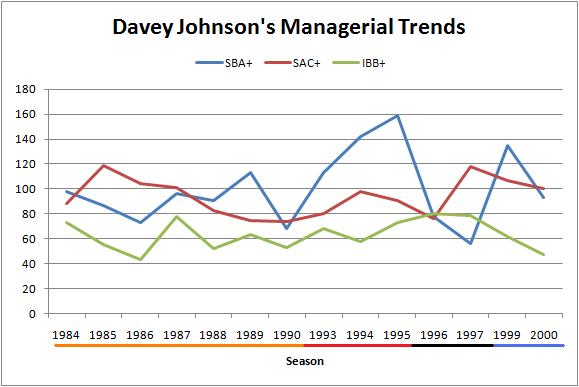 Johnson seemingly adjusts his stolen base and bunting strategies based on the teams he is handed, which seems intuitive, but there is something to be said for a willingness to adapt, a quality not every skipper shares. Regardless of the team or league, Johnson seems hesitant ever to issue a free pass, a point in his favor. It’s hard to analyze the numbers too much beyond the surface, as not every bunt, intentional walk, and stolen base attempt is created equal. Generally, though, the fewer outs you give up and the fewer extra bases you allow, the better, and Johnson has largely succeeded in keeping his teams’ counterproductive practices to a minimum.

Now that we’ve established the outlines of Johnson’s career, we can fill them in with details taken from his previous work as a manager:

That’s a lot of information to digest, but what is known about Johnson can be boiled down to a concise summary: he has won many ballgames with teams of various talent levels and compositions, hates giving away outs and bases, and seemingly adjusts his tactics based on his teams’ strengths and weaknesses. Johnson has served with Washington in an advisory capacity over the last several seasons, so it stands to reason that Mike Rizzo and his associates are fans of the qualitative abilities that Johnson brings to the table, too. No one can predict how the latest Johnson administration in Washington will work out, but there’s little reason to conclude that it will be as capable of inspiring horror as one of del Toro's creations.

You need to be logged in to comment. Login or Subscribe
joeldinda
For whatever it's worth, what I remember about Davey's manager stints was his willingness to use HoJo at shortstop when he was with the Mets, a clear case of valuing offense over defense.
Reply to joeldinda
dianagramr
That's not as big a deal as starting Kevin Mitchell at shortstop for 20 games in 1986!

Kevin Mitchell!
Reply to dianagramr
Carosella
He especially liked to play HoJo at SS when Sid Fernandez pitched because there were very few ground balls when he pitched. In fact one game I remeber attending the Mets did not record a single assist. 1 of only 2 times that ever happened. I still have the scoresheet from that game.
Reply to Carosella
doctawojo
I liked this piece a lot, as I always appreciate attempts to get at some objectivity, however rough or imperfect, in managerial analysis.
Reply to doctawojo