The screwball is fairly rare pitch in the major leagues, thrown in recent years by only two pitchers. Daniel Ray Herrera uses the screwball regularly, and Dallas Braden has thrown it on rare occasion. It's time to add another member to the screwballers club.

Yoshinori Tateyama was signed by the Texas Rangers this past winter after a 12-year career with the Nippon Ham Fighters. Tateyama put up good numbers in 21 relief innings with the Triple-A Round Rock Express before getting the call to the big leagues on May 23. In ten games with Texas, he has struck out nine and walked none, but he has allowed seven runs as the consequence of 12 hits, including three home runs.

But more interesting than his control or his performance thus far, to me at least, is his screwball. During the Rangers-Yankees game on June 14, the outstanding YES-MO slow-motion camera captured one of the screwballs that Tateyama threw to Brett Gardner. Here is a succession of still frames from that slo-mo replay. Note first of all his Vulcan grip on the baseball and secondly how much he turned his wrist over toward his body on release. 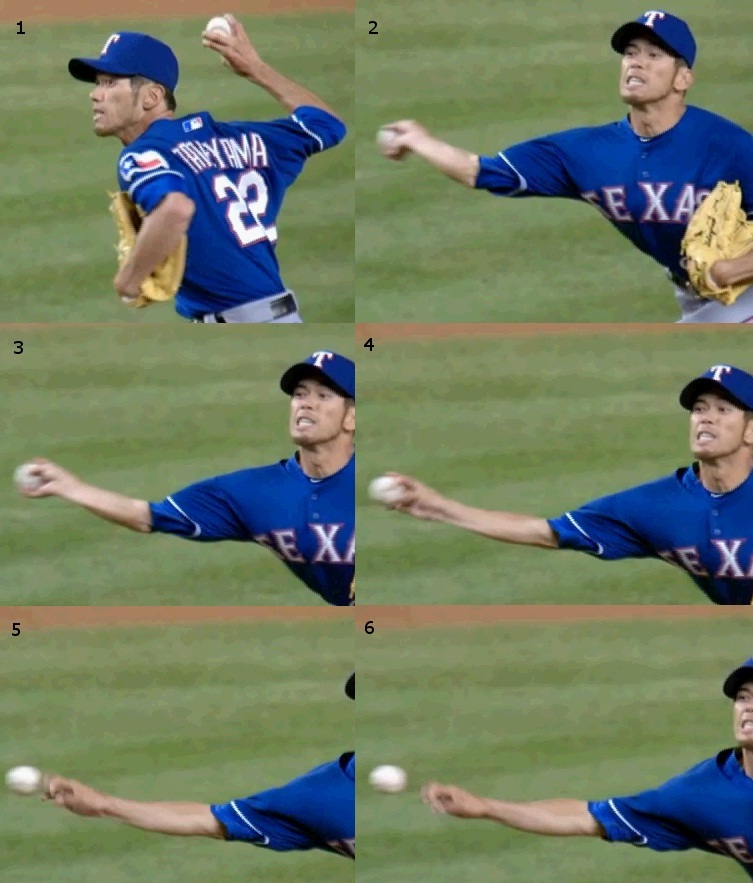 A little bit of pronation is normal on a splitter or a circle changeup, but the amount of wrist action that Tateyama applied to this pitch went well beyond that. Tateyama's finger action around the ball also slowed down the pitch. He seems to throw two variations of this off-speed pitch–a faster version in the low 70s and a slower version in the upper 60s. The slower version has more screwball action.

As you can see from the photo, Tateyama is a sidearmer. He has used his screwball almost exclusively to left-handed hitters, and he has a sidearm curveball at 71 mph that he has used mostly against right-handed hitters. His fastball has come in around 87 mph.

Welcome to America, Mr. Tateyama, and welcome to the club of major-league screwballers.

This is probably a stupid question, but how does a sidearm screwball display any of the lateral motion normally associated with the pitch? It's intuitive that a righty's screwball, thrown over the top, would break away from a lefty hitter. I thought that was because it spun around the ball's north-south axis, so to speak. Then why doesn't it follow that the same hand action would make the ball spin around its east-west axis when thrown sidearm? It seems to me that a sidearm screwball should "rise" more than it should break laterally.
Reply to bobbygrace
mikefast
It's not a stupid question, but it's one I'll have to answer later this evening when I can have a baseball in hand. It's too easy for me to get mixed up when conceptualizing the 3-D effects of the spin without a baseball to hold while I'm doing it.
Reply to mikefast
mikefast
You're right about the spin directions for an over-the-top and sidearm screwball. But the ball spinning around the east-west axis (with topspin) will drop.

Tateyama is a little bit above pure sidearm, and he may not be putting exactly the screwball spin on the pitch that you described, but he's pretty close. Anyway, he gets some drop and some movement away from a lefty hitter.

Also, his Vulcan grip seems to cut the spin rate so that he gets a bit of tumbling splitter action mixed in and not as much deflection from the spin as he would if he were spinning the ball harder with a grip like Herrera uses, for instance.
Reply to mikefast
bobbygrace
Of course -- topspin causes the ball to drop. I wrote that last part a bit hastily; my boss had just caught me reading BP instead of working! Thank you for the explanation.
Reply to bobbygrace
michaelstreet
Cool stuff here, Mike. Japanese pitchers love to pitch sidearm, and the NPB is a breaking-ball league, so Tateyama's got the perfecta of NPB pitching talents.

That Vulcan grip is just crazy--thanks for the explanation of how it makes the ball move.
Reply to michaelstreet