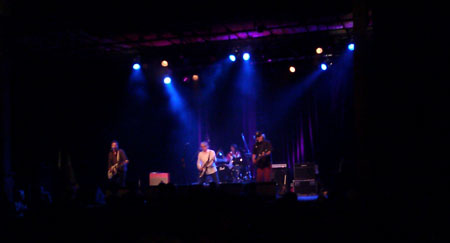 Members of The Baseball Project perform Saturday night in Milwaukee.

At the Turner Hall Ballroom in Milwaukee Saturday night, The Baseball Project put on a show worthy of baseball's greatest cathedrals. A side-project of Steve Wynn, Peter Buck, and Scott McCaughey, the four-man "supergroup" (featuring a very-talented Linda Pitmon on drums) recently released their second-album of baseball-themed songs, "Vol. 2: High & Inside", and are currently on tour playing in baseball towns and venues across the northern states. If you happen to be near any of these venues – such as the Cubby Bear in Chicago on Memorial Day or the House of Blues across from Fenway Park or Ommegang Brewery in Cooperstown next weekend – I highly recommend checking out this fun, rocking concert filled with references to Ted Williams, Harvey Haddix, Curt Flood, Carl Mays and more.

The concert opened with the upbeat "Don't Call Them Twinkies", with Wynn (on lead vocals) and Pitmon (a Minnesota-native) clearly enjoying themselves. The song – a history of the franchise which has called the Twin Cities home for fifty years, and which features prominently the many successes and contributions of the franchise – may be about the Twins in name, but it represents all small market teams that big-city press often marginalize. It's a sentiment that plays well in Milwaukee. The set quickly segued into "Ted Fucking Williams", a track from their first album that is perfectly made for live audiences. The tempo is fast and catchy as the song moves through the great centerfielders of the 1950s and 1960s before reaching the wonderful chorus ("But there's nothing that he can do better than I can/I'm Ted Fucking Williams!"). Wynn and company play the song with the verve and excitement you'd hope for a song as crowd-pleasing as "Ted Fucking Williams".

In fact, the setlist contained at least three songs about the Red Sox: "Ted Fucking Williams", "Tony (Boston's Chosen Son)", and "Buckner's Bolero". McCaughey was quick to point out that none of the band members are Red Sox fans. One can only imagine, then, that the team features so heavily in the band's songs because of the great drama of Boston's last 90 years. But it's not just the Red Sox that act as a muse for The Baseball Project. "Gratitude (for Curt Flood)", a dark song lamenting Flood's exile from baseball by players and owners after his landmark struggle, came across with power and gravity. The bandmembers respect Flood and his sad tale, and it comes through on-stage. Other songs inspired by recognizable figures included "Ichiro Goes to the Moon", "Jackie's Lament", "Harvey Haddix", "The Yankee Flipper", "The Closer" (dedicated to John Axford), and the delightful "Panda and the Freak" (a very appropriate choice, with the Giants in town to play the Brewers). "Fair Weather Fans", the most personal song in the band's catalog, goes beyond all that and tells each bandmembers' story of what it's like to be a hometown fan living far away.

The only drawback of the concert was in how the vocals came across in the venue. In the small hall and with the three guitars on stage, the instruments easily overpowered the vocals at times. With Wynn, McCaughey, and Mike Mills (Peter Buck's R.E.M. bandmate filling in for him on the tour) manning the guitars, this isn't exactly a bad thing. Any chance to hear that kind of talent is a good one. But many of The Baseball Project's songs tell great tales – it's disappointing when they get drowned out. Mills, for example, joined in on "Fair Weather Fans", but his voice could not carry over McCaughey's guitar. I couldn't tell you if he added his own story to the song, or sang Buck's.

Despite this, concert-goers walked out of Turner Hall very happy with the show. Everyone on stage seemed to be enjoying themselves early in the tour (this was only the second stop on this leg), with Wynn and McCaughey especially owning the stage as if they've been there for years. Wynn's smile and McCaughey's theatrics were always fun to watch. The Baseball Project is a celebration of baseball through music. Saturday's 90-minute concert was a celebration of both music and baseball. It's a pretty nice trade-off. Now if they could just think to include "Roll Out the Barrel" next time they're in town, it'd be perfect.

You need to be logged in to comment. Login or Subscribe
Lassaller
I believe that's Scott McCaughey, he of the Young Fresh Fellows, The Minus 5 (also with Buck) as well as some touring and track work with REM.

Reply to Lassaller
marmour
Yes, that is the Scott McCaughey. He has played on the past several REM albums and their last few tours as well.

Reply to marmour
lgranillo
Yes, it's definitely Scott. I must've had "Steve" on the brain after typing Wynn's name... thanks for pointing that out.
Reply to lgranillo
marmour
I saw them in Eugene, OR, several weeks ago (I guess this was before the current "tour"). It was in a bar with perhaps 50 people there, and Buck was on bass (not Mills). We sat right up front, no more than 10 feet from the stage, and the vocals were clear (especially if you knew most of the words already).

I agree that this is a fun band. They know their baseball, and of course their musical chops are legit. A highly enjoyable evening.