“When your manager is as fickle as a tabloid starlet with a sweet tooth for experienced men, it isn`t easy to be a semi-wild young fireballer.” – Todd Wellemeyer’s comment from Baseball Prospectus 2006.

A week or two ago, I was talking to someone about the Reds rotation and how they should proceed with deploying their depth. At one point or another, the conversation included a jab Dusty Baker’s way—something along the lines of, “Well, you need starting pitching depth when Baker is your manager.” Reputations are difficult to shake in the real world, and sometimes even tougher in the baseball world, which is why Baker’s reputation precedes him even in the present day.

Although Baker spent more time managing the Giants than the Cubs and Reds combined, the infamy of his time in Chicago lives on. It was there, often within the friendly confines, that Baker would ignore pitch counts when handling Kerry Wood and Mark Prior. Those two pitchers—enormous talents that they were—subsequently became the poster arms of a pitch count revolution, but not before the young fireballers' careers went up in flames.

The barbs thrown Baker’s way vary from cautious and accusatory (Baker probably had something to do with Prior’s and Wood’s injuries) to acerbic and definitive (Baker killed Prior’s and Wood’s careers). As impossible as it is to know just how much of the blame should lie at Baker’s feet, the Windy City bloodletting stained his reputation and pronounced him as a pitcher killer.

Baker eventually moved on from the Cubs, and has acted as the Reds pilot since the 2008 season. It would be easy to assume Baker still abuses pitchers in a way that ensures future therapy sessions of both the physical and psychological variety, but the numbers do not necessarily support that conclusion. When pitcher abuse is talked about, usually the extreme cases are discussed—like Baker’s 2003 season, where he had Wood throw 120-plus pitches in 13 games.

Rest assured, Wood wasn’t the only one Baker has ridden hard, as the graph below shows, going beyond 120 pitches was a common staple of a Dusty-managed rotation—the key word there being “was”.  Since taking over the Reds, Baker has only had 14 instances where his starting pitcher has exceeded 120 pitches—he averaged 17 per season with Chicago, including 29 during that 2003 season, when the Cubs advanced to the National League Championship Series and accounted for nearly 13 percent of the 120-plus games on the season all by themselves: 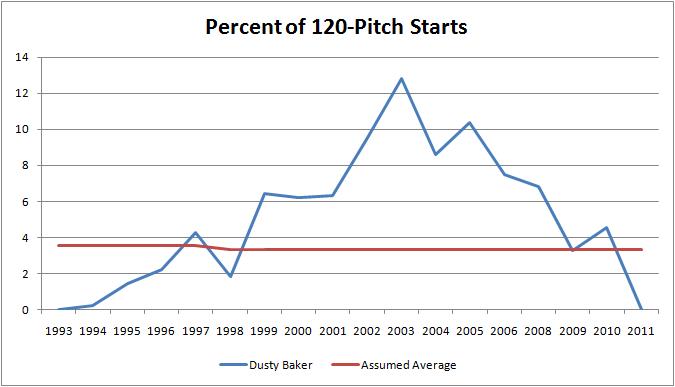 That is a percentage of total 120-pitch games, and the assumed average is if each team had an equal number of games. Rarely is that the case, but it provides a visual baseline.  While the extremeness of Baker’s negligence has curbed, he still allows his pitchers to throw more pitches per start than the league-average, as displayed below in graph form again. The gap between Baker’s staff and the league-average is less egregious than it was in the past, though: 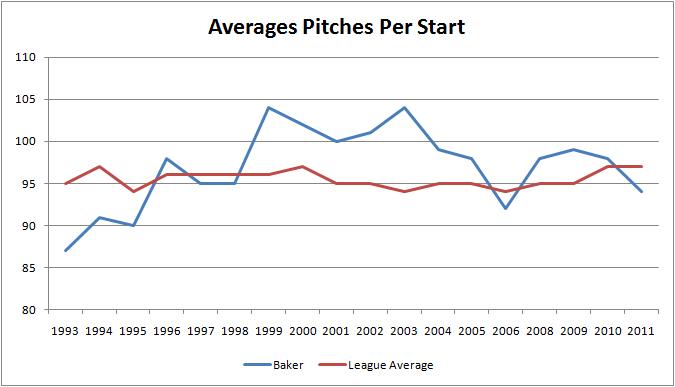 Anecdotal evidence is invaluable in the court of public opinion and Baker flunked by having his pitchers rack up high pitch counts and injuries. For instance, Baker allowed four of his 2003 starters to top 125 pitches (with Wood and Prior topping 140 and 130 respectively), but has not allowed a starter to exceed 125 pitches during his time with the Reds. Cincinnati’s staff has suffered a few injuries over the years, like most other teams, but cries of inappropriate usage seem limited to Aaron Harang—although Harang actually averaged more innings and pitches per outing before Baker arrived, and his arm wasn't abused so that much that it couldn't be used again.

A logical step is to wonder whether Baker’s usage has altered because of the quality of his rotation or bullpen. If there is a relationship between the rate of quality starts and pitches per game under Baker, then it simply does not show up in a conventional format: 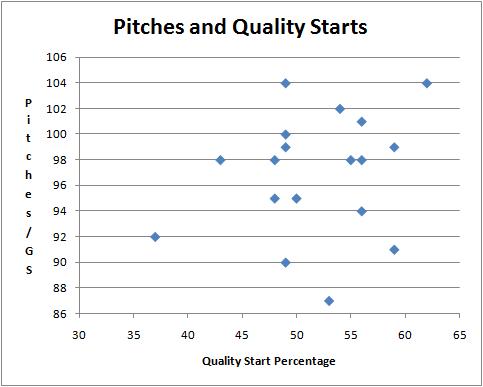 Maybe the secret to Baker’s evolution is the further development of the 12-man pitching staff. Nowadays, it seems like a given for each team to have seven relievers at any moment. Is it the most optimal usage of a roster spot? Probably not, but if it means managers can ease off their starters then perhaps it is a justifiable evil. That is just speculation, though, as Baker may have just further developed his own mindset and system for handling pitchers and workloads.

Such an angle is an interesting one too. While players tend to be viewed as beacons of upside with possibility of improvement, managers are often viewed as finished products without further upside. If Jose Bautista can start hitting for power and Curtis Granderson can begin hitting left-handed pitching, then why can’t Dusty Baker start handling pitchers with more care?

You need to be logged in to comment. Login or Subscribe
gbeat17
Thank you RJ. As a Reds fan I was horrified by the hiring of Dusty Baker, but he has clearly learned how to handle starting pitchers somewhere along the line (or surrounded himself by coaches who do, and I don't care either way). It is time his reputation catches up to reality. The man is a good manager who has learned from his mistakes.
Reply to gbeat17
MichavdB
Any possibility that he just has more faith in his bullpen?
Reply to MichavdB
gbeat17
My observations are purely subjective, but the young starters seem to be on some type of pitch count, not a more arbitrary innings count, or a "get me to my setup man" approach. He even seems to be making progress with lineup construction and in recognizing some value in walks. I truly think he is a different manager then he was with Chicago, and I've changed from a Baker critic to a fan.
Reply to gbeat17
EricMeeker
I would make the case that Dusty Baker's restraint is a function of being instructed/ordered by management to observe, and obide by, a preset pitch limit for each pitcher. As I understand it, each organization does this at the GM level in order to protect their most valuable asset, which is quality, young pitching. These assets are too critical for the success of any team to be left entirely in the hands of the field manager. Dusty may deserve some credit for changing his thinking, but my intuition tells me that it was probably forced onto him for his, and the organization's, own good.
Reply to EricMeeker
TheRedsMan
Baker still manages position players like the generic roles he wants them to fill instead of the players they are, his handling of the bullpen has certainly been questionable at times and his insistence on playing small ball in the early innings is a constant source of frustration.

However, he's actually been pretty darn good about handling the young starters. Last night's game was a good example. Volquez was doing pretty well and left the 6th in at 97 pitches. But chances are that if he went out for the 7th, he wasn't going to be able to finish it himself. Instead, Dusty went the the pen. I tend to agree, Dusty needs to have a good compliment of relievers he can trust.
Reply to TheRedsMan
gregorybfoley
I haven't read your article but I did scan it for the following names: Mike Leake, Johnny Cueto, Aroldis Chapman, Homer Bailey, the omission of which seams like a problem for your thesis.
Reply to gregorybfoley
rawagman
You haven't read the article - you don't know the thesis.
Reply to rawagman
daddybish
No mention of what happened to Aaron Harang with one year of Dusty?
Reply to daddybish
rawagman
From the article:
"Cincinnatiâ€™s staff has suffered a few injuries over the years, like most other teams, but cries of inappropriate usage seem limited to Aaron Harangâ€”although Harang actually averaged more innings and pitches per outing before Baker arrived, and his arm wasn't abused so that much that it couldn't be used again"
Reply to rawagman
PeteyShoes
Some real winners in the commenting body here. Read before you comment.
Reply to PeteyShoes
Oleoay
Part of the problem with Baker (from a Cubs fan perspective) wasn't just the pitch count workload, but how he used the pitchers. Wood and Prior were barely breaking 90mph during the playoffs and Baker left them in there for extended times even though the Cubs were up in the series and specifically, in the Bartman game.

With Harang, he was brought back into a game after a two hour rain delay in one instance. In another instance, he had a 63 pitch, four inning relief appearance two days after a 103 pitch start. I don't consider his Giants tenure as problem-free either.

The other part of the problem is that there was more than just the pitching side... he was surly with the media, infamous about basecloggers, jerked around many rookies, trashed Sosa (back when Sosa was semi-charismatic) and was the epitome of a lame duck manager halfway through 2005.
Reply to Oleoay
Oleoay
Oh and don't forget that he still thinks Corey Patterson's a leadoff hitter ;)
Reply to Oleoay
eighteen
Hell, he'd still have Neifi Perez in there if he could.
Reply to eighteen
desktopedit
Your "Average Pitches Per Start" graph seems to suggest that Baker started riding his starters harder midway through his tenure in SF, continued through his first couple of years in Chicago, and started coming back to the league even before he left. Either he learned from his experience or, as one of the commenters noted, he's on a much shorter leash.
Reply to desktopedit