When I was a kid, imagination was far less regimented than it is today. The funny thing is, we asked for that regimentation, and those that sold imagination answered. What they gave us, we could use in baseball now.

The regimentation to which I refer took place in the world of comic-book continuity. Beginning when I was young, very young, in preschool and first grade, my fellow children and I, inspired in part by an afternoon block of programming on WPIX in New York that included, in succession, the 1950s Superman and Lone Ranger TV shows followed by the 1960s Batman show, and Saturday morning shows including The Super Friends and Shazam!, would playact the parts of heroes and villains, and when we finally caught up to each other after much chasing in circles, we would not fight but rather argue over who should win. Apparently mine was an unusually dialectical crowd of post-toddlers.

This ritual lasted until approximately April, 1977, after which Star Wars came out and colonized our minds. The arguments were pushed aside in favor of the Force, forever unsolved. Who is stronger, Superman or Captain Marvel? The Golden-Age Flash or the Silver-Age Flash? The Thing or the Hulk?

For several years, there were no official answers. Then, perhaps inspired, directly or indirectly, by the rising popularity of Dungeons & Dragons, a game in which the abilities of every character are precisely delineated, and the popular sourcebooks that were published in parallel, we got the first tentative specifications. In 1981, Marvel Comics published Amazing Spider-Man Annual #15. The lead story was a fun Denny O’Neil/Frank Miller collaboration involving Dr. Octopus, the Punisher, and poisoned newspaper presses. As much as I loved that story, I found what should have been a little throwaway backup by Mark Gruenwald and Bob Layton just as compelling.

“Just How Strong is… Spider-Man?” promised to end all of those schoolyard debates in just three pages. In it, the creators attempted to sort many of the company’s main characters at that time into different tiers—“Super-Heavyweights,” “Heavyweights,” “Super-Mediumweights,” “Mediumweights,” and a final, unlabeled category that could have been called “Reg’lar Guys.” 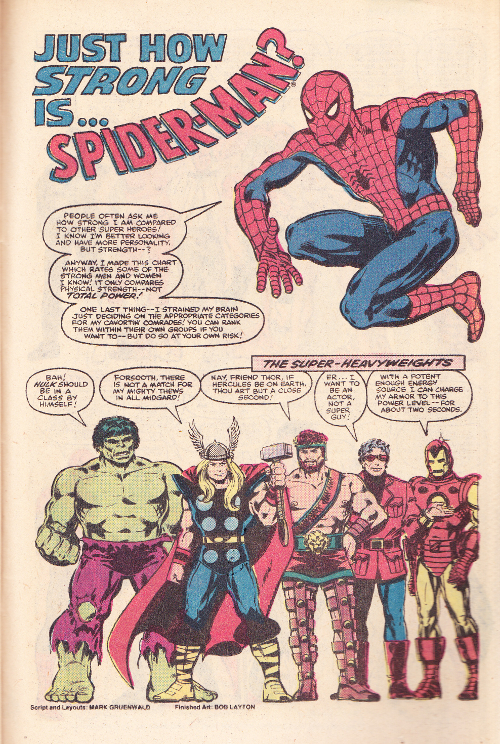 So, now we knew that Thor and the Hulk were in roughly the same class, as was Iron Man, at least sometimes, that Wonder Man was tediously whiny even in the Reagan administration, and that as a group, they were all stronger than these guys: 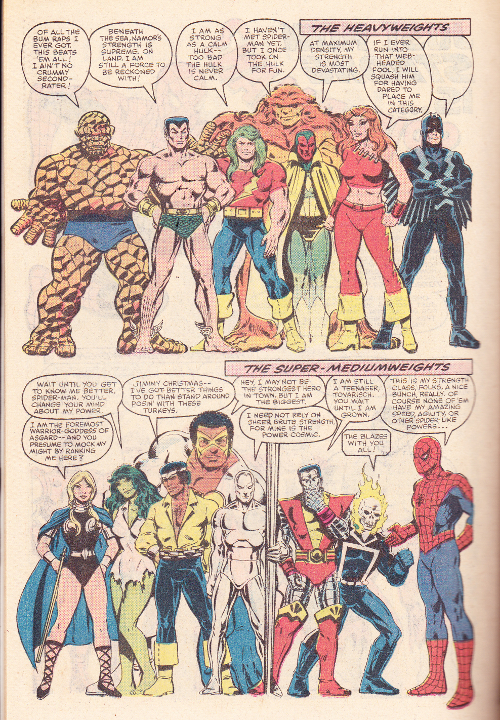 So, now we had some idea. Later would come all manner of official handbooks that took these rankings more seriously, so that if you go to marvel.com today, you can see (say) the abilities of Spider-Man and Wolverine compared on the same scale: 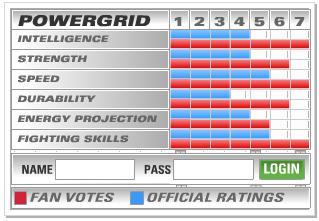 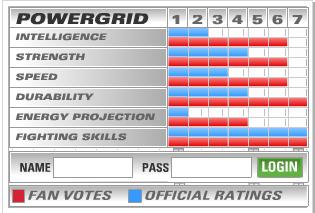 Now, in the real world we know that ranking something as complex as intelligence is difficult and controversial, but we do try to rate more basic traits like speed in baseball, be it with the 20-80 scouting sale or by aiming a radar gun at a pitcher. However, some of our key knowledge derives from inference rather than any kind of objective measurement—we judge ability largely by results. While scouts do project some light-hitting younger players based on their potential to grow, add strength, and therefore power, it is also possible to imagine a player who has the physical implements for power but hits in such a way or under such conditions that no scout would be able to discern it.

Yet, what if we knew objectively how strong a player was when swinging a bat, and how swiftly he was able to move the bat through the strike zone? Then we could confidently construct a “super-heavyweights” picture more like this:

I don’t know if it’s possible to measure a baseball player’s physical abilities with the same certainty with which Marvel’s writers and readers can peg Spider-Man’s place in the grand scheme of things. To get Alex Rodriguez’s Spider-Man ranking, we would have to measure his bat speed by radar or camera, measure the strength of impact when he strikes the baseball (or a reasonable facsimile), and estimate his muscle mass. If that sort of testing is being conducted by teams, they haven't been kind enough to post the results on baseball cards so the rest of us can settle our disputes.

Perhaps the targeting aspect of hitting a baseball will always remain elusive, but thanks to basic physics (stuff you probably picked up back in high school, like “force equals mass times acceleration”) we know that a player’s strength dictates his bat speed, and bat speed dictates how hard the ball is struck, and how hard the ball is struck determines how far it will go. Knowing each player’s attributes in these areas would not only be helpful towards getting an objective measurement of his physical talents, but would help teams diagnose any gap between a player’s abilities and results.

Perhaps it is naïve to suggest this, but if such ratings were commonly available, perhaps the murmurings of “juicing” that greet players such as Jose Bautista, whose home run productions undergoes a dramatic change, would be defused to some degree by his physical ratings. Seemingly inexplicable changes could at least be viewed within the context of the player’s actual characteristics. After all, no one has ever accused Spider-Man of using PEDs. Through long exposure, readers have a sense of what he can do, and if, in extremis, he exceeds his limitations (such as in this landmark issue), they are willing to accept that heroes rise to the occasion. The public has not exhibited the same patience with ballplayers, perhaps with good reason.

So, sadly, we are back to the schoolyard when it comes to the capabilities of our protagonists. We now know more about who is stronger, the Thing or the Hulk (the Hulk takes it, 7-6, according to the numbers), at least insofar as such statistics are honored by the writers, than we know about A-Rod and Bautista, or Marcus Thames and Matt Stairs, or for that matter, David Ortiz and Thor. I say Ortiz takes it, and until we get their swing speeds down, who is to say I’m wrong?

You need to be logged in to comment. Login or Subscribe
beitvash
This is awesome.
Reply to beitvash
jlebeck66
I liked it. Fun article... even if it didn't answer anything and left us like a bunch of arguing children.
Reply to jlebeck66
tdogg217
I always thought Jim Thome was Thor. This article has me digging through the crates!
Reply to tdogg217
Deadheadbrewer
No wonder I now read BP--I used to subscribe to Marvel Comics AND play D&D.
Reply to Deadheadbrewer
Scartore
Me too... Well, actually I still play D&D... ')
Reply to Scartore
delasky
I'm sorry, how exactly is radioactive spider venom not a PED?
Reply to delasky
devine
Indeed. And really, is "I got bit by a spider on a field trip to the museum" any more credible than "I thought it was flaxseed oil"?
Reply to devine
Oleoay
As a kid, I always liked the stats they put on the early Transformers toys.
Reply to Oleoay
fgreenagel2
Braun had a 9 in strength.
Reply to fgreenagel2
sgrcuts
I can't believe Silver Surfer was listed so low, who was the scout for the Marvel article? Clearly East Coast bias.
Reply to sgrcuts
fgreenagel2
This was fixed later with the late 80's release of the "Official Handbook of the Marvel Universe." It classified abilities much better than marvel.com does (with only a range of 1 - 7). The Surfer was at the top of the strength scale.

That said, while Thor is the most powerful Avenger, Cap clearly has the highest VORP.

....I have to go argue on some freak-show message boards now.
Reply to fgreenagel2
yadenr
While not perfect, Hit Tracker posts "True Distance" and "no doubt" home runs. It seems Bautista is akin to David Banner, only he has been really mad for two years now.
Reply to yadenr