A pitcher’s fastball speed is probably the most macho attribute of his ability. Guile, command, deception, a good breaking ball, and the ability to change speeds are all very important parts of the pitching craft. Only one number, however, routinely makes the scoreboard and the television screen on every pitch—the speed. As Jeff Francoeur can tell you, if it’s on the scoreboard, it’s important.

This spring, however, I have noticed that fastball speed changes seem to be a marker of more serious troubles, at least in some cases. Obviously, I am not the first person to make that observation. Nor have I found all the answers about when and how fastball speed matters for every pitcher. Instead, I want to explore some possibilities for the data and point out directions for further research.

In this article, we will examine a pitcher’s average fastball speed by appearance. The speed data comes from PITCHf/x and is adjusted for PITCHf/x camera calibration errors and for temperature, similar to the method outlined here.

The most obvious fastball speed indicator occurs when a pitcher experiences a sudden drop in speed from his established level for one or two starts. This situation frequently occurs with pitcher injuries of various types. 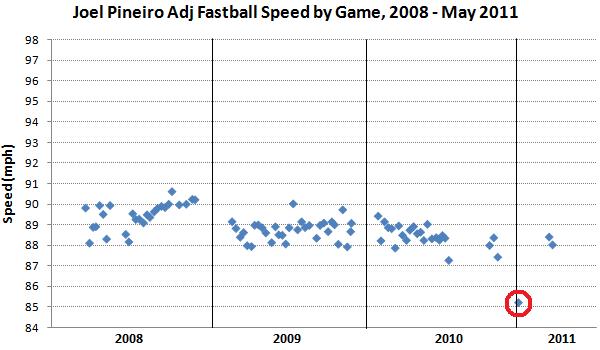 Joel Pineiro is a classic example. In his spring training start of this past March 15, his average fastball speed was only 85 mph, much lower than his typical 88-89 mph heater. Despite protestations that his discomfort was minor and temporary, Pineiro spent over a month on the disabled list with right shoulder tightness before returning on April 30, with his fastball speed near normal.

Similarly, Joe Blanton displayed a fastball speed drop in his last two starts, sandwiched around a right elbow injury that sent him to the disabled list. Blanton continued to experience soreness in his return from the DL. 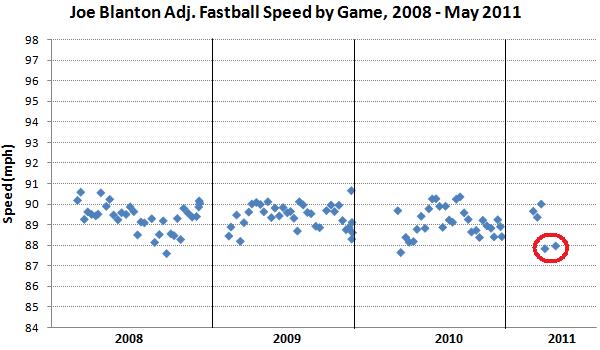 Adam Wainwright’s elbow injury was preceded by elbow soreness in his final two starts of the 2010 season, and it showed up in reduced fastball speed in his final start. 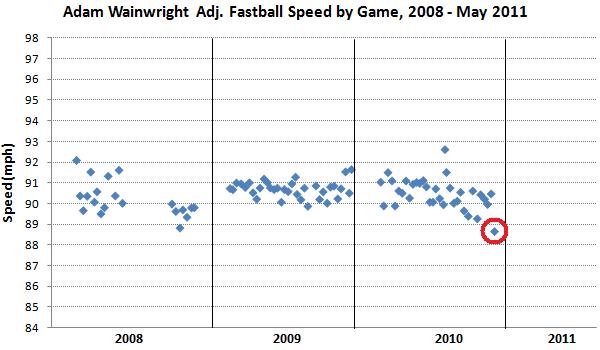 Sometimes injury manifests itself in a prolonged fastball speed decline, as it did for Brad Lidge, as he fought through elbow inflammation throughout the 2010 season. 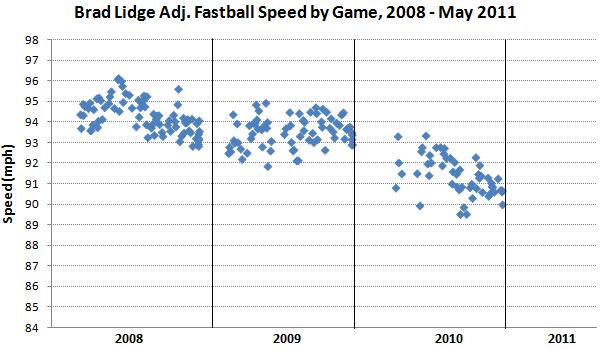 And of course, we have the notorious “dead arm” that has bedeviled Phil Hughes this season, costing him about four mph from his fastball. 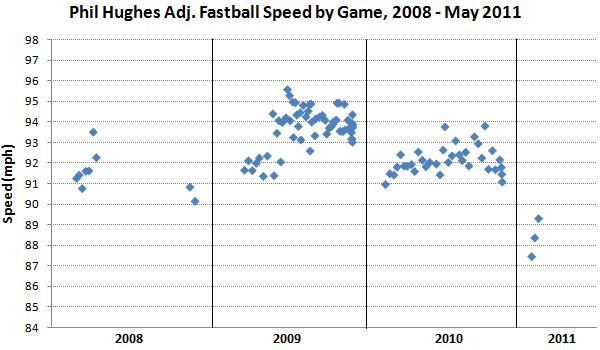 We have watched other pitchers regain fastball speed as they have recovered from Tommy John surgery. Both Carl Pavano and Francisco Liriano eventually regained two or three mph on their fastballs, and along with that speed, some effectiveness. However, both have slipped somewhat in fastball speed and have struggled this year. 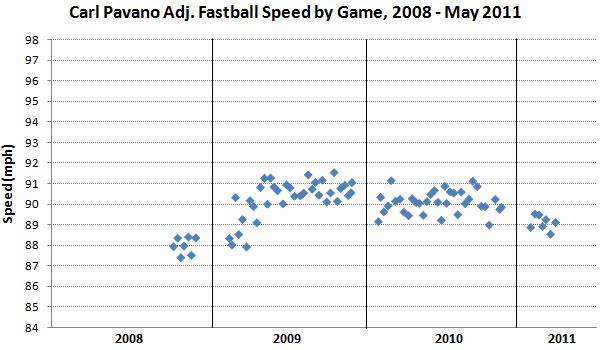 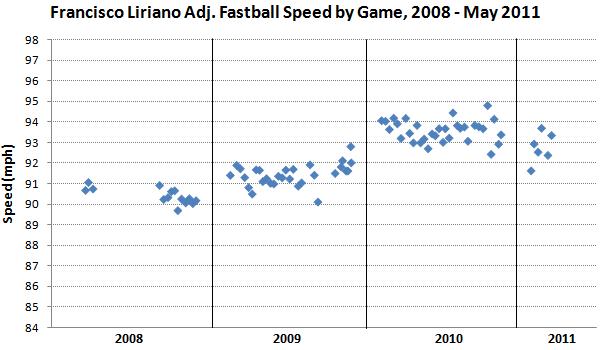 Joe Nathan perhaps can take heart and hope that his fastball will return as his surgery grows more distant in the rearview mirror. 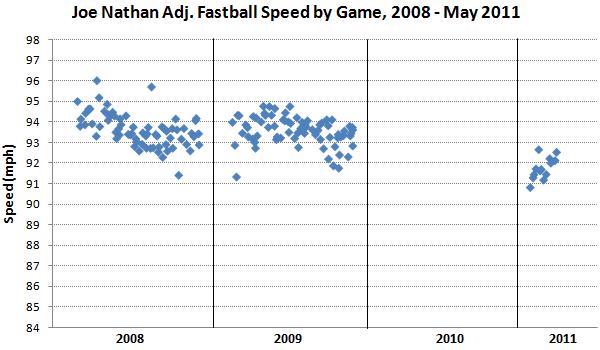 However, an injury is not always apparent or perhaps even present at all when reduced fastball speed accompanies faltering performance. Javier Vazquez may be the epitome of such lost effectiveness. This graph, like his career, is going in the wrong direction. 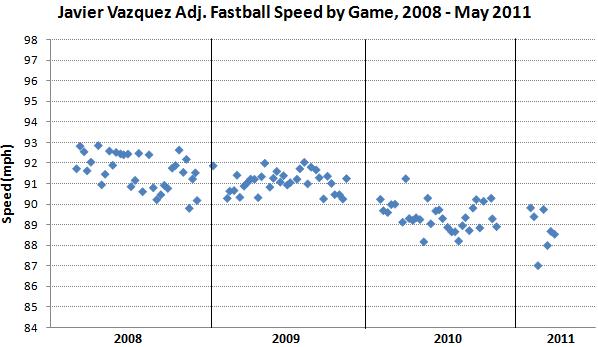 Chris Tillman’s fastball speed has also been falling, though one may question whether he ever had effectiveness at the major-league level. 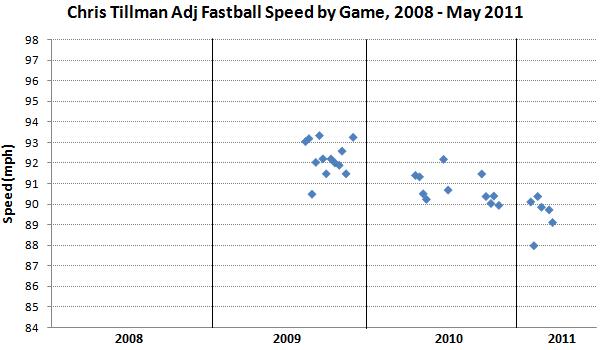 After a dominant return from Japan in 2010, Colby Lewis has struggled with the long ball in 2011 and has lost some speed on his fastball, too. 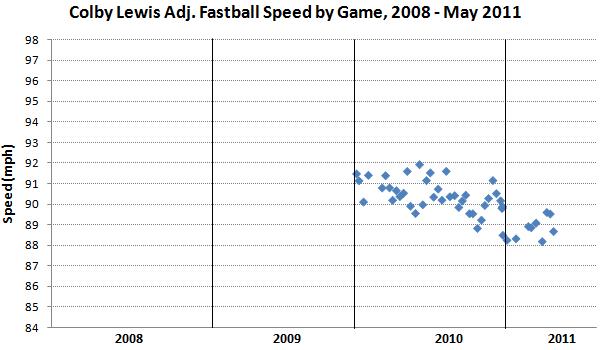 Others, like Ervin Santana and Ubaldo Jimenez, have seen former greatness that was accompanied by a stronger fastball elude them as their heaters have cooled. 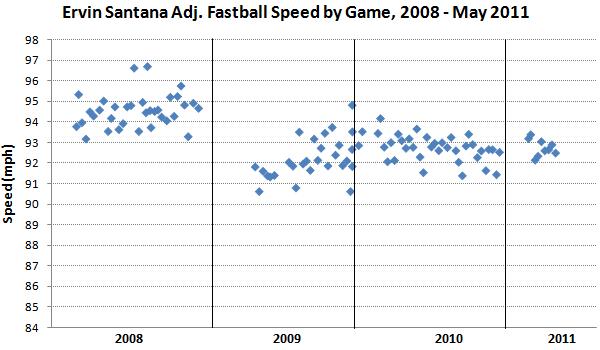 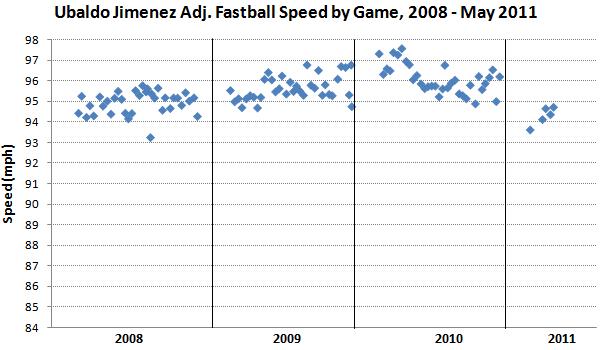 Conversely, some pitchers have achieved a new level of success by sustaining an increased fastball speed. Justin Verlander and Jon Lester stand as prime examples. In Lester’s case, the uptick may be attributable to his overcoming the lingering effects of lymphoma treatment. 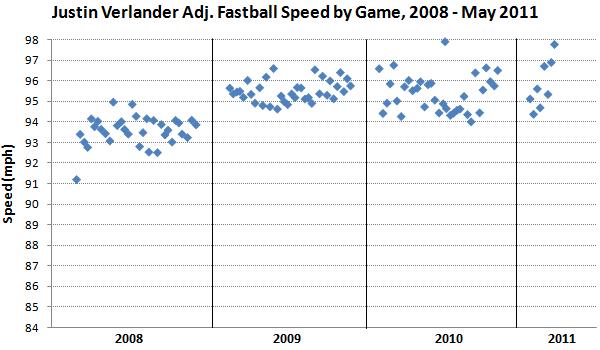 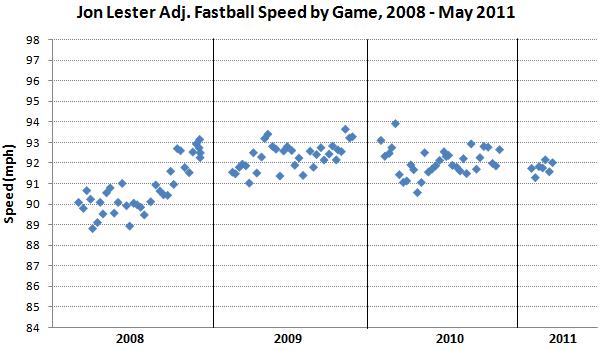 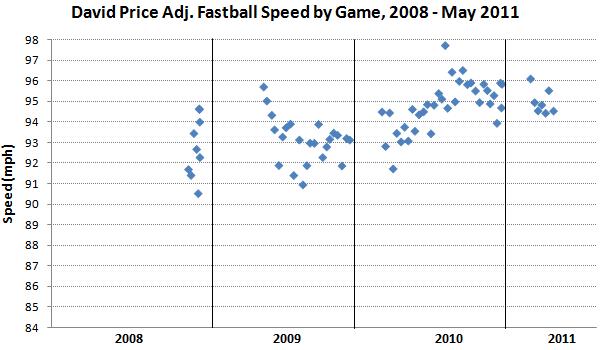 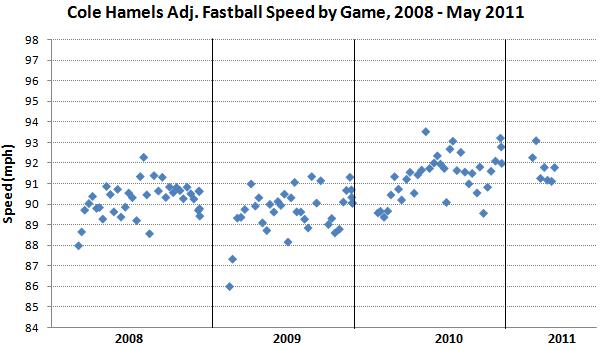 This year, pitchers such as Jered Weaver, Doug Fister, and Joel Hanrahan have stepped up their fastball speed and their results. 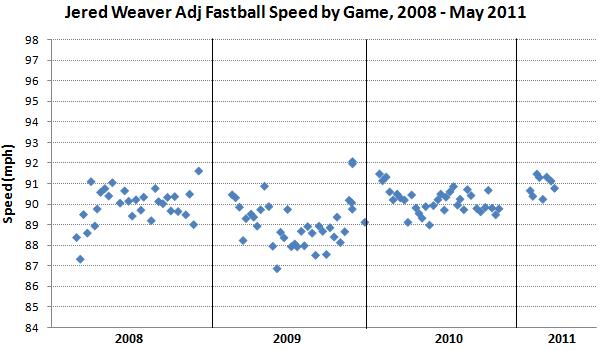 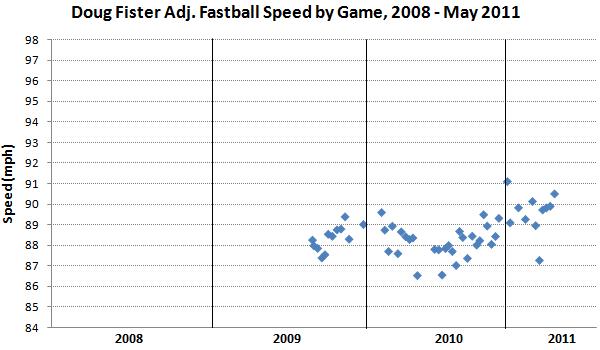 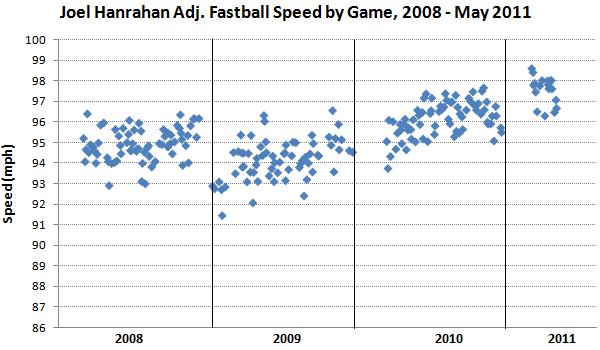 One thing I am still trying to sort out is how to determine whether a one-game speed blip is indicative of injury, like it was for Pineiro and Wainwright, or whether it was innocuous, as it seems to have been for Doug Fister on April 14, 2011. The one-game drop for Fister’s start in Kansas City may also be due to an inadequacy in the method for correcting for PITCHf/x camera calibration errors. The speeds in Kansas City have been fluctuating by one to two mph between homestands in 2011.

However, calibration problems aside, one-game speed drops are still of uncertain meaning. Compare the data for two workhorse aces, Roy Oswalt and Roy Halladay. On July 11, 2008, Oswalt lasted only one inning as he pitched through left hip pain with a fastball three mph slower than normal. 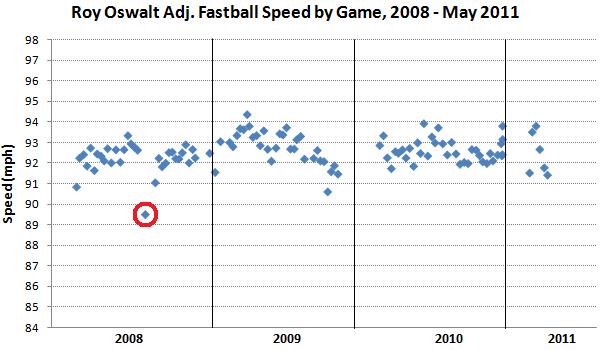 By contrast, I could find no mention of pain or injury associated with Halladay’s start on June 8, 2008, in which he pitched 7 2/3 innings with a fastball 2.5 mph slower than usual. 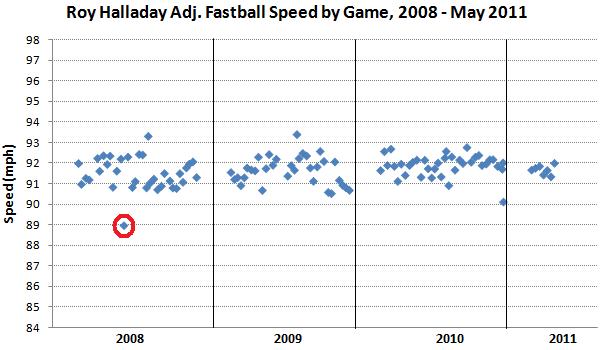 Sometimes speed changes occur without a clear tie to performance changes, as has been the case for Justin Masterson and Tim Lincecum. 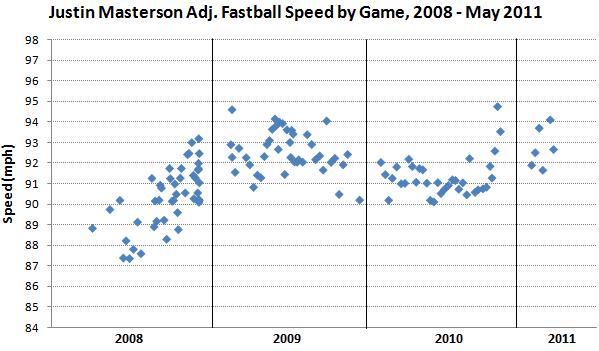 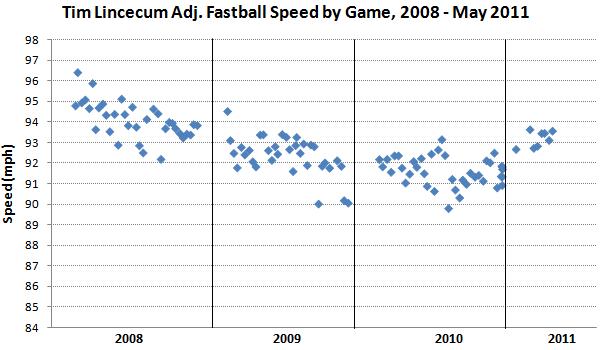 And, of course, not every pitcher has major changes in fastball speed. Some are like Ryan Dempster. 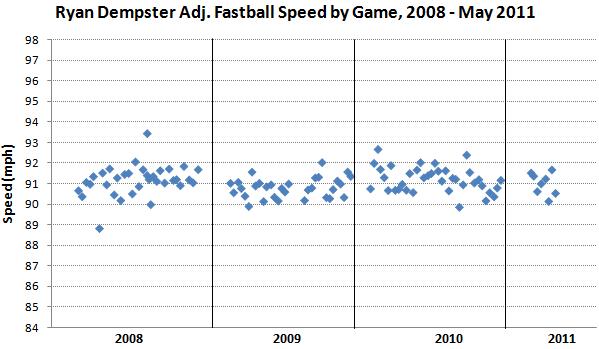 Then there is Jeremy Guthrie, with a fastball speed that is constantly changing but always going nowhere. 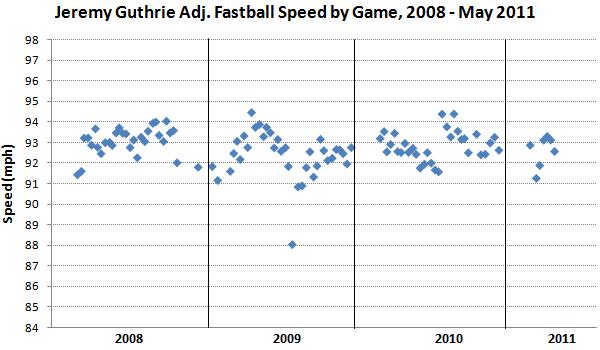 Finally, let’s look at two young pitchers for whom the story of fastball speed, injury, and effectiveness has been quite a saga. Both Joba Chamberlain and Madison Bumgarner seem to have found their footing again in the major leagues, though Bumgarner’s win-loss record this year might fool you into thinking otherwise. 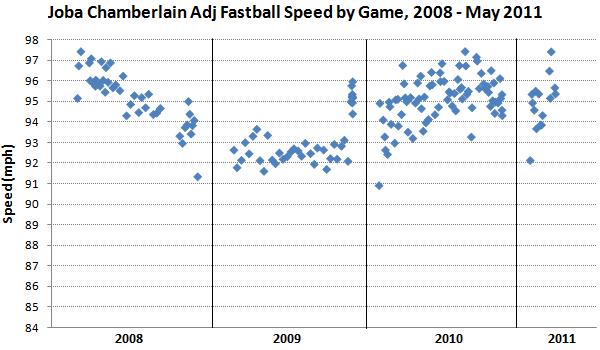 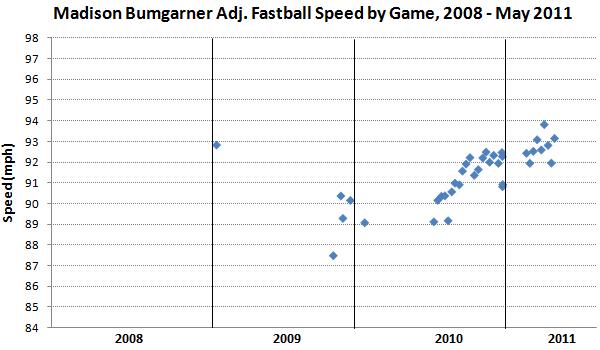 Much work remains to be done before we can translate the adjusted fastball speed data into a meaningful understanding of injury prediction and the effect of speed on performance. For many of the pitchers who have lost fastball speed and suffered a drop in performance, the velocity drop may simply be symptomatic of other problems, whether a mechanical issue or a hidden injury. Similarly, improved performance that correlates with increased fastball speed may be due to other changes by the pitcher that just happened to improve pitch speed as well.

Ideally, the speed information would be combined with databases on performance, injury, and pitcher mechanics. Ultimately, of course, each pitcher is an individual with a unique physiology, mechanics, training regimen, and approach to the game. We are unlikely ever to be able to predict injury or performance with anything approaching perfection. However, improvements in our knowledge in this area are extremely valuable.

It would be interesting to track changes in movement as well as speed.
Reply to conjoinedtwins
mikefast
Thanks.

Yes, movement changes would be important to track also. IMO, it's more sensitive to pitch classification problems than is fastball speed. For example, if the distribution between two-seamers and four-seamers changes, and your classification system doesn't do a good job of picking up on that, speed isn't affected much, but movement is.

I had meant to link to Josh Kalk's 2009 study of this at an intra-game level:
http://www.hardballtimes.com/main/article/the-injury-zone/
Reply to mikefast
jpatridge
With the trends for Javier Vazquez, I'm curious as to why the BP pre-season projections for him were so lofty? (200 K's, 3.76 ERA, 1.26 WHIP).
Reply to jpatridge
mikefast
We don't (yet) include fastball speed data into the PECOTA projection system. One challenge of doing that is that reliable speed data only goes back a few years, severely limiting the amount of comparable players available for comparison. Hopefully in time that will be a challenge we can overcome.
Reply to mikefast
noonan
PECOTA doesn't know about his dip in velocity.
Reply to noonan
mbrignall
Have you looked at Erik Bedard? According to the tracker on the telecasts, he's been all over this year. If I remember right, he dropped a bit over both 2008 and 2009 as he wore down, too.
Reply to mbrignall
mikefast
Here is the chart for Bedard:
http://www.baseballprospectus.com/u/images/fb_bedard.jpg

He was sitting around 91 mph in both 2008 and 2009. Of course both of those seasons were partially lost to injury. In 2011, he started slow, around 90 mph) but has picked up the pace to the 91-92 mph range in his recent starts.
Reply to mikefast
jrmayne
Could you mark articles like this with an "Awesome" tag? It might prevent people from missing them.
Reply to jrmayne
rbrianc
Agreed, this is the most interesting piece I've seen on BP this year and one of the top ten easy. The trends within the year are I treating too.

Following the Angels, the early success of Weaver and Haren have brought back memories of Tanana and Ryan. I would love to see this graph for their entire careers. Ryan we all know about and imagine he was pretty flatlined his long career.

Less known to younger readers is the case of Tanana who had a blazer and flamed out by age 25, and I'm sure you'd see a sudden drop off circa 1978; however he re- invented himself and you'd win a few bets by asking which LHP won the most games in AL history
Reply to rbrianc
SkyKing162
This is a pretty average article for you, Mike. Meaning I loved it.

How about Charlie Morton? Has his changed arm slot produced increase velocity in addition to more movement?

A more theoretical question -- how does fastball speed hurt/help pitchers who are already establish as MLB quality (even fringe, like Doug Fister)? Does it create more whiffs? Does it lower BABIP? Does it allow them to throw more strikes without increases in BABIP or HR/CON or a decrease in whiff rate? Does it allow them to throw fastballs more often, thus putting more pitches in the strike zone without penalty? Does it indirectly help off-speed pitches somehow?

Your other questions are good, but I don't have answers to them at this point.
Reply to mikefast
mikefast
Morton chart is here:
http://www.baseballprospectus.com/u/images/fb_morton.jpg
Reply to mikefast
jrmayne
Sky, I'm way late on this, but I'm confident that increased velocity decreases BABIP for right-handers that throw 90+. It probably decreases BABIP for everyone, but there's a ton of noise in the data.

--JRM
Reply to jrmayne
SkyKing162
I'd love to have updates on velocity changes as their noticeable. Instant decreases are pointed out by everyone on twitter (hi, Phil Hughes), but slow decreases or increases seem to be less prominent. Is there a way to program query that picks out "significant" changes either short or long-term?
Reply to SkyKing162
mikefast
I have been thinking about this question, too. The human eye is really good at picking up on patterns (sometimes even on patterns that are really just random noise). If I could come up with a set of sound principles for identifying real speed changes, I could probably tell a computer how to do it, too. It's coming up with the set of sound principles, other than "I know it when I see it", that is difficult.
Reply to mikefast