Ever have a moment that makes you doubt your sanity, just for a second? Although my days of collecting baseball cards are far in the past, every once in awhile I will break down and buy a pack or three, or even a whole set. I suffered such a relapse over the weekend while standing near a point-of-purchase display at my local Target emporium, and grabbed a few packs of Topps "Opening Day" cards. These were oddly loaded packs. Though there were only seven cards to a wrapper, instead of getting three Paul Zuvellas and an Ed Hearn, as used to be my lot (anyone want to buy 42 Paul Zuvella cards cheap?), I got a Roy Halladay, a Justin Verlander, and just star after star.

One of said cards was Troy Tulowitzki, the great Rockies shortstop. I held the card up to admire it–how can you be a baseball fan in 2011 and not be a Tulo fan, not covet him for your team? I imagined Tulo in Yankees pinstripes, in Red Sox togs, leading Joe Maddon's Rays back to the postseason, hitting home runs and playing short–wait a second. I did a double-take. Here i's the card: 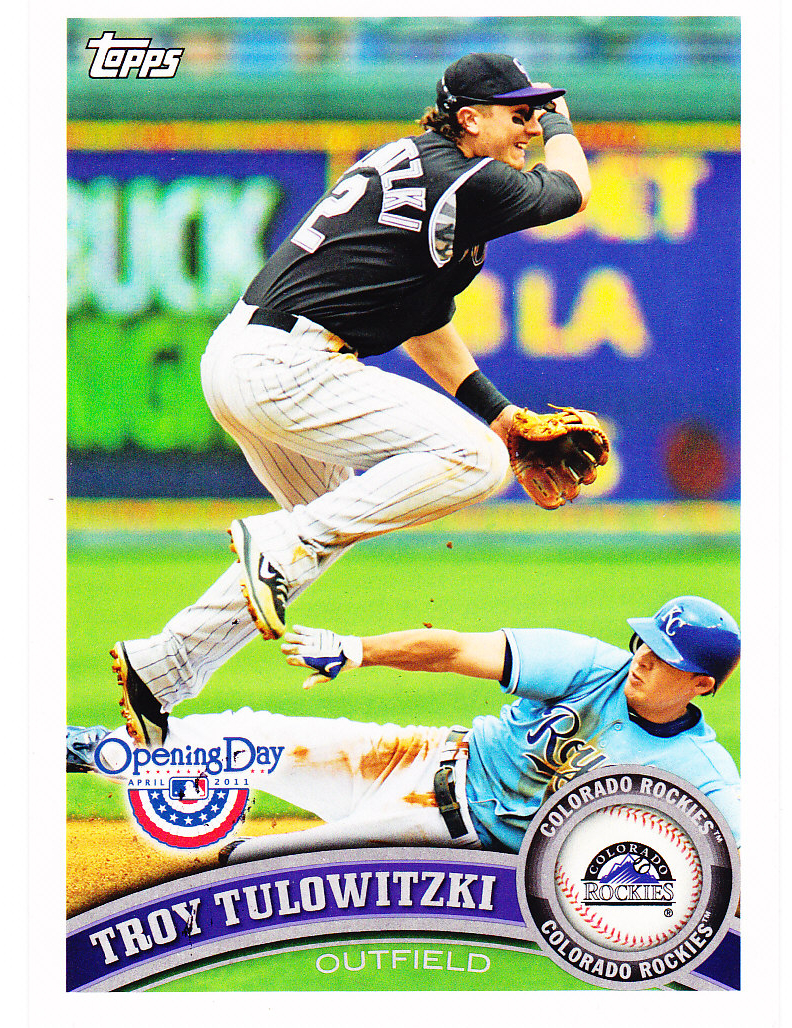 I hope the scan is clear enough that you can make out Tulowitzki's new position. Yes, Topps has turned him an outfielder. They also seem to have caught him with a large green swear-word appearing on the scoreboard, but put that aside. For a moment I was in shock. Had I confused some obscure Rockies fourth outfielder with their great young shortstop who was not named Troy Tulowitzki? And if so, why the hell was this Royals guy executing a takeout slide on an outfielder? Under what circumstances could that even happen? I have never seen an outfielder make a diving catch on a sinking liner, and the batter, enranged because he had a sure hit stolen, make a right turn at second and go charging into the outfield. I would pay good money to see something like this happen–maybe Milton Bradley on one of his bad days might try it–but it seems unlikely. It's fun to imagine, though, batter in full battlecry as he tears across the grass: "Yaaaaaaaaaaaaaaaaarrrrrrrrrrr!"

Panicking, afraid that everything I knew was wrong (as one of our book subtitles has it), I flipped over the card. The back repeats the "Troy Tulowitzki – Outfield" claim, but also refers to his having had the "MLB shortstop leadership" in home runs and RBIs, so I was reassured that I was not going senile and that Topps had made an error. It's hardly the first error they've made or the worst; they've gotten a few players with middle fingers extended or flies open, once took a picture of Gary Pettis's younger brother instead of Gary himself, and put out the "Roy Campanella Symbol of Courage" card, which still strikes me as being of questionable taste. Heck, no one is perfect, especially when you're putting out 700 cards a year for 50 years or similar. It's a lot of work, a lot to keep track of, and is probably not dissimilar to putting together our own annual that way. Still, it will take me awhile to forgive and forget the moment that I thought that maybe I had somehow confused Troy Tulowitzki with Seth Smith or Dexter Fowler, and that the many prescription medications I take had finally rotted my brain.

You need to be logged in to comment. Login or Subscribe
swarmee
I'm pretty sure the "_uck" on the scoreboard is for a dollar deal "Buck _____" rather than a swear word.
Reply to swarmee
mattymatty2000
I too collected cards in my youth. The biggest error card of that time (the late '80s early '90s) was Billy Ripken's 1988 Fleer which featured a bat handle with a strong preference to procreate with someone's face. If you know what I mean.
Reply to mattymatty2000
worldtour
Dale Murphy 1989 Upper Deck reversed negative. It was something like $80 at the time! I held on to it WAY too long. What is it worth, 16 cents now?
Reply to worldtour
mattymatty2000
That's the thing about the Billy Ripken card, it may not be valuable anymore, but it'll always be hilarious.
Reply to mattymatty2000
ndemause
My favorite card in my possession remains the 1964 Phillies rookie card that says of now-forgotten prospect Dave Bennett: "The 19-year-old righthanded curveballer is just 18 years old!"
Reply to ndemause
dianagramr
Perhaps he didn't make it because he was immature for his age?
Reply to dianagramr
mattymatty2000
He was sneaky young.
Reply to mattymatty2000
ostrowj1
Yet another glaring error... Editors at Topps have been responsible for some pretty poor quality lately (or as far back as 1964). This is the last error I will stand for, I will never buy another pack again!


Moving along... I think this set of cards are really ugly.
Reply to ostrowj1