In the winter of 1913/1914, Charles Comiskey sponsored a world tour of two ballclubs that would take them to four different continents. The clubs were Comiskey's White Sox and John McGraw's Giants. After a month of touring around the United States, the teams and their entourages (wives, etc.) sailed the seas, going from Japan to China to the Philippines to Australia to Sri Lanka to Egypt and finally to Europe, where they played in Italy, France, and England.

James Elfers wrote about the tour in The Tour to End All Tours, where he details an "almost shipwreck, a broiled ox head, a midnight party on the roof of the Manila Hotel, unexplained doings by baseball players in Shanghai; it was a boys' adventure writ large by men who played a child's game for a living." I'm only just now learning of the tour, so I hope to read more about these colorful stories in the near future.

In the March 1, 1914, edition of the New York Times, there is a brief recap of the final stop on the tour's itinerary, when they played games in London in front of the King. The story includes some great observations about the games and how Londoners couldn't really watch baseball without seeing it through the lens of either cricket or rounders. More importantly, however, are the few pictures from the tour included with the story. The team portrait of the tuxedoed players at the Vatican is nice, but it's the uniformed players resting in front of the Sphinx (shown below) that really caught my eye. 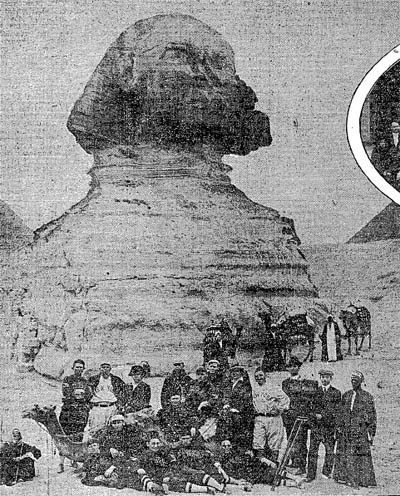 I've looked around and I can't find this picture anywhere else. In Commy, a book about the life of Charles Comiskey, a similar picture can be found from the tour's visit to Cairo. As you can see below, though, it is not nearly as great of a picture as the one included in the 1914 Times article (though it looks miles better).

There is another picture of ballplayers with the Sphinx that is much more well-known. That photo (below) shows a group of turn-of-the-century ballplayers sitting alongside and even on top of the Sphinx. That photo was taken during the Spalding World Tour of 1888-1889. In Elfers' book, he mentions that, during the Spalding tour, the players weren't all that respectful of the monument and that they "had a contest to see who could give the Sphinx a 'black eye'" by "flinging a baseball at the face of the Sphinx in an attempt to hit its eye."

The Comiskey world tour of 1913-1914 had the bad luck of taking place mere months before the Great War broke out and, as such, as been mostly forgotten (though I wouldn't be surprised to find a few experts here). It appears to have been quite the event, though. I'm glad to see that the Times helped preserve at least one great moment from it. (The filmmaker Frank McGlynn Sr. was a part of the tour, using the players and locations to film a silent movie about a superfan following his heroes around the world. I'm not sure any copies of "The Giants-White Sox Tour" exist, though.)

You need to be logged in to comment. Login or Subscribe
jhardman
I read this and just imagine what younger leagues like the NFL and NBA will do when going back 100+ years. Baseball is far more fun. But Larry - do you ever think that when you are doing some of your archive dives that you might be going down the path of Robert Nathan's "The Weans"? (one of my favorite reads ever)

Keep it up - I love your stuff.
Reply to jhardman
lgranillo
You know, I had never heard of "The Weans" before this comment, so I went and looked it up. Sounds fantastic. I'd love to read the whole thing.

I don't think I'm afraid of becoming a Wean anthropologist, though. We're not that far removed from baseball's origins, yet. Though I would certainly enjoy seeing a Wean take on early baseball...
Reply to lgranillo