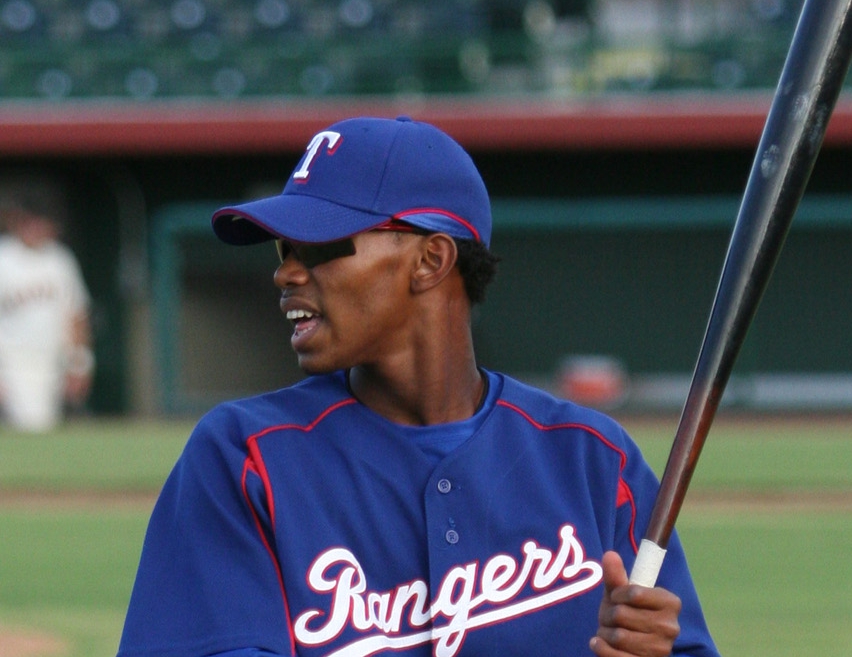 It was reported today, that Rangers centerfield prospect, Engel Beltre, was suspended by the Texas League for 15 games for his role in a brawl that took place in San Antonio on Tuesday.  The brawl was reported to have started after a 9th inning go-ahead home run was ruled a ground-rule double, which resulted in an eruption of player and fan emotion, leading to the eventual ejection of Frisco’s manager Steve Buechele, who was arguing the call.

Here’s what really happened: The San Antonio Missions thought it would be a good idea to sell $2 beer at 11am on a Tuesday. Good plan. After a few hours of cheap beer, a few fans started throwing insults at some players on the field, most notably Frisco Outfielder/DH Mike Bianucci, who might be the strongest player in their system [read: last player I would consider heckling]. After Bianucci hit the soon-to-be called back go-ahead home run, he let one of the vocal fans in the stands know all about it, which is never a smart move. Things escalated quickly after that, as a few intoxicated fans began throwing bottles onto the field and in the general vicinity of some of the players. Soon after, Engel Beltre heaved what was reported to be a trash can into the stands, and the melee was on. The end-result was a few fan arrests, a few citations, and the Texas Rangers buying Beltre a ticket to Arizona, where he will work out until his 15 game suspension is over.

Last Memorial Day, Beltre was involved in another brawl, this time as a result of his game-winning home run, which he decided to aggressively pimp as he rounded the bases, moving his lips faster than his legs. Taking offense to the showboating, a few players on the Visalia Rawhide “questioned” Beltre and the benches soon cleared and the brawl was activated.

Considered a prospect with five-tool potential, Beltre’s biggest weakness on the field is his immature approach at the plate; he swings at bad balls and acts like a player allergic to working the count or taking a walk. On the young season, the 21 year-old Dominican is hitting .253/.286/.316 with only three walks in 79 AB. Given his history of flash over substance, and his participation in two substantial minor league incidents, it looks like Beltre’s immaturity at the plate is merely a microcosm of his immaturity as a person. As a fan of the player, I’d prefer to see his name in Kevin’s daily minor league column, and not as the title of a separate blog post detailing his indiscretions.

You need to be logged in to comment. Login or Subscribe
hyprvypr
Isn't a pre-requisite of being cocky actually being good at what you do? Maybe he thinks potential is more important then substance!
Reply to hyprvypr
nils707
I like the pictures! Oh, and interesting to hear the other side of the story that we never would have otherwise
Reply to nils707
Scott44
Perhaps he needs to meet Doobie, the player not the illegal substance, before he takes the field to calm him down.
Reply to Scott44
jhardman
Hopefully he stays suspended a few more after the Texas League suspension expires. After the Frank Francisco chair throwing incident a few years back, the Rangers organization has its own internal organizational rules regarding player interaction with unruly fans. (And to take it a step further, hopefully the other 29 organizations have those internal rules as well.)
Reply to jhardman