It seems as if every April there’s a pitcher who bursts upon the scene and makes us ask: How could he—how could anyone—be this good? Three years ago it was Cliff Lee, redefining himself as baseball’s top control artist. The following year it was Zack Greinke, a pitching prodigy who cleared his mental hurdles in order to become a pitching savant. Last April it was Ubaldo Jimenez’s turn, as the Rockies right-hander fully harnessed his fastball, the hardest pitch thrown by any starting pitcher. This year it’s Jered Weaver, off to a 6-0, 0.99 ERA start. But why him and why now?

Weaver has always been good. He began his MLB career in 2006 by winning his first seven starts. In 2009, he became the undisputed ace of the Halos’ rotation, and last year, he led all of baseball in strikeouts. Yet, the southern-California native had never captured the national spotlight before this season. Perhaps his fastball, just 90 miles per hour, failed to captivate our imaginations. Using more advanced PITCHf/x data, we can take a look at what makes Weaver so effective.

Weaver’s velocity isn’t overpowering,  but his stuff plays up for other reasons. The first thing that jumps out is his atypical delivery. Weaver throws across his body. By standing way over to the third-base side of the pitching rubber and using his 6’7” frame to extend his release point even further, Weaver shows batters a look they’re not used to. The following image displays the average release points among right-handed pitchers, and you can see that Weaver represents something of an outlier. 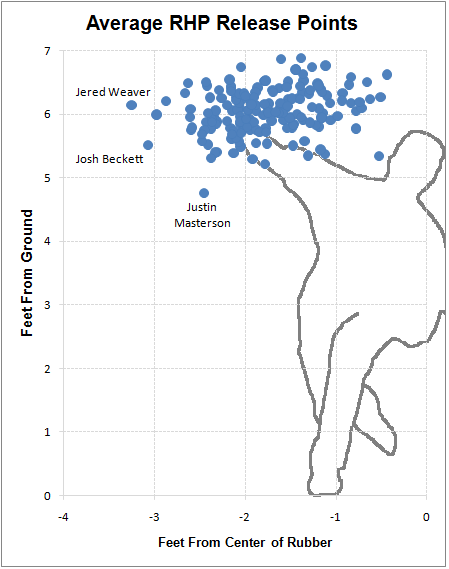 Weaver’s stuff is more impressive than the radar gun would imply, given his fastball’s movement. We can use whiff rate to more accurately appraise his stuff.

An average 90-mile-per-hour fastball from a righty gets whiffs on about 13 percent of swings, while a 95-MPH heater induces whiffs 18 percent of the time. However, Weaver generates half a foot of horizontal cutting action above average on his four-seam fastball, and the pitch rises a few inches more than expected, too. What’s the whiff rate of a fastball with that much movement paired with a mediocre 90 MPH?  Eighteen percent. Weaver’s lack of velocity on his fastball is completely offset by movement. It doesn’t hurt that Weaver is throwing slightly harder than usual this season—in April, no less, when velocity is supposed to be deflated due to inclement weather.

Good stuff isn’t worth a thing if you can’t locate it. Last year, Dave Allen of FanGraphs noticed that Weaver was inducing whiffs on his curves by throwing them high in the zone. This year, he’s elevating his fastball. Weaver is throwing his four-seam fastball higher in the zone on average than he ever has before. Below are the average pitch heights in feet and the corresponding whiff rates for his four-seamer.

Thrown from a difficult-to-pick-up release point, Weaver’s rising fastball explodes on hitters when located up in the zone. In addition, Weaver keeps hitters off-balance with his off-speed stuff. He’s thrown his changeup for strikes a whopping 76% of the time so far, yet batters have gone 3-for-38 against it.

It’s no surprise that as Weaver has continued to climb the ladder with his fastball, he’s picked up more and more strikeouts. The downside of such an approach is supposed to be an increase in home runs allowed. Weaver is indeed allowing fly balls, as we would expect, but seldom have those fly balls left the yard.

Weaver has also been somewhat lucky in the opposition he’s faced. Generally, opposing lineups are balanced against Weaver, matching a left-handed batter for every righty. But this year, Weaver has had the platoon advantage against 60 percent of the batters he’s faced. He’s also been getting better support from his defense than he has in the past. The departure of Mike Napoli and addition of Peter Bourjos cannot be overlooked as an influence on the Angels’ staff.

Weaver made the leap to Cy Young candidate in 2010 and is just now getting the recognition he deserves. No pitcher can be this good, and we can point to the usual suspects that indicate luck: a low BABIP and a low home-run rate. As he faces more left-handed hitters, both of those figures will rise. Some would-be home run pitches tomorrow are probably getting popped up today. Regressing toward his historic BABIP and home run rates, Weaver has looked more like a 2.00 ERA pitcher than one capable of posting his current otherworldly sub-1.00 mark.

Nevertheless, we have an early Cy Young Award favorite. Even with some regression, you can’t take away Weaver’s 6-0 start. In Weaver and rotation-mate Dan Haren, who’s off to a 4-1 start of his own with a 1.23 ERA, the American League has its own version of Halladay and Lee.

As it stands, the Angels are not as good a team as the Texas Rangers, despite their strength at the top of the rotation. However, if they manage to squeeze their way into October, they’ll have an ace and number-two starter who would match up favorably with any AL contender in a playoff series.

Thanks to Mike Fast for research assistance.

You need to be logged in to comment. Login or Subscribe
gmolyneux
Nice piece, Jeremy. Question: have you ever looked at K rate (or whiff %) in terms of release point? For example, it might by that the further from center of the rubber a pitch is released by a RHP, the higher the whiff rate will be for RHH (and perhaps the reverse for LHH), controlling for velocity and movement.

Reply to gmolyneux
jgreenhouse
Guy, I've only looked at release points/platoon splits by run value before. I think looking at components like groundball rate and whiff rate would be much more meaningful, and I can't recall if it's been done before, but if it hasn't I'm sure it will be soon.
Reply to jgreenhouse