Joakim Soria has been one of the best relief pitchers in baseball over the past four years. From 2007 to 2010, he put up a 2.01 ERA with 281 strikeouts against only 70 walks and 182 hits in 255 innings. Over that period, he held the opposition scoreless in 82 percent of the games he entered, and he allowed multiple runs only five percent of the time. For comparison, Mariano Rivera had a 2.05 ERA over those four years, held the opposition scoreless 83 percent of the time, and allowed multiple runs five percent of the time. Even while fighting (and usually failing) to avoid the basement in the AL Central, the Royals could claim a truly elite closer in Soria, the rare All-Star on a perennial cellar dweller.

However, Soria’s performance so far in 2011 has not been nearly as dominant. For one thing, he allowed four runs on four hits to lose a game to the White Sox on April 6. But even more concerning, he did not strike out a batter until his fourth appearance of the year, and in 9 2/3 innings, he has only five strikeouts to go along with five walks and 10 hits.

Some observers have suggested that Soria's troubles could be traced to declining fastball velocity. This concern abated somewhat when his reported speeds from the Royals' most recent homestand were normal. According to Greg Moore of Sportvision, the Kauffman Stadium scoreboard and Fox Sports Kansas City both report pitch speeds based upon PITCHf/x data. Here are the average pitch speeds recorded by Soria for each game from 2008 to April 19, 2011, according to PITCHf/x. 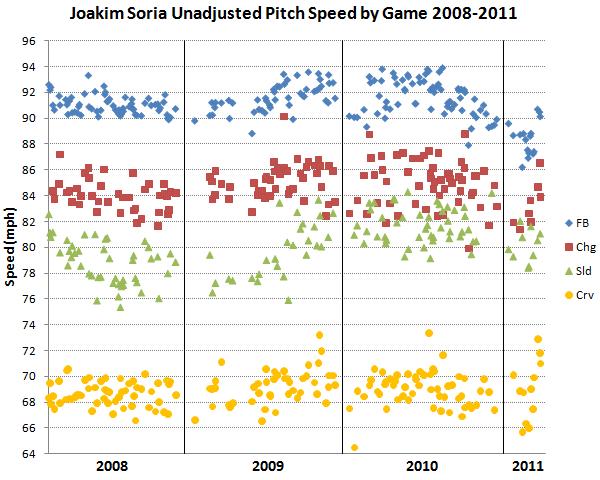 This data seems to suggest that Soria’s average fastball speed began declining from a high of 92-93 mph last fall, reaching a minimum of around 87 mph in April of this year. However, there are two confounding factors that render this conclusion false.

One is that the calibration of the PITCHf/x system in Kauffman Stadium has changed slightly over time. If we compare the average fastball speed of pitchers throwing in games in Kansas City to the same pitchers' overall average fastball speed from 2008-2010, we can measure how well-calibrated the PITCHf/x system in Kansas City has been for capturing fastball velocity. 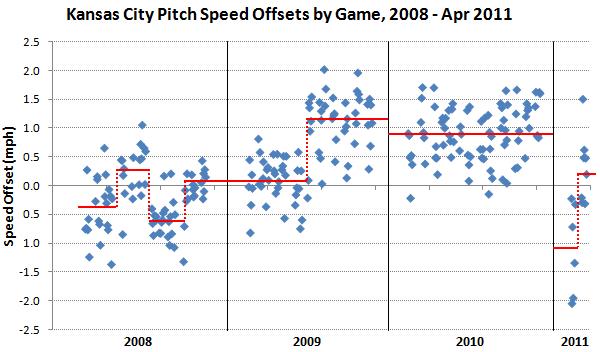 Since July 1, 2009, the Kauffman Stadium PITCHf/x system has been reporting fastball speeds that are about one mph higher than the average speeds recorded by those same pitchers in other stadiums around the league. However, for the first homestand of April 2011, the PITCHf/x system in Kauffman Stadium reported fastball speeds that were one mph lower than average. This two-mph drop artificially deflated Soria’s reported fastball speeds for the games he pitched in Kansas City during the first homestand of 2011. The Kansas City PITCHf/x system appears to have been recalibrated prior to the second homestand of 2011, and the fastball speeds recorded since then have been 0.3 mph faster than expected. We can apply a similar technique to all games and all ballparks where Soria pitched in order to correct for PITCHf/x calibration changes.

In Soria’s case, however, there is an additional factor in play. Starting on July 29, 2010, he introduced a slower version of his fastball. His normal fastball has quite a lot of cutting action; his new fastball is similar, but slower and with slightly more cutting action. When we separate out his two fastball speeds and account for PITCHf/x calibration changes and temperature effects, here is what we see for Soria’s average fastball speeds over time. 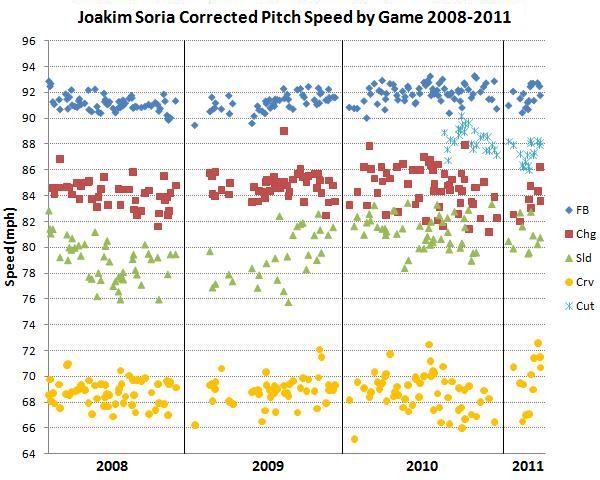 Soria’s fastball velocity is just fine and has been fine. The apparent dip was an artifact of a new pitch and slight changes in the measurement calibration.

The following chart shows the movement of Soria’s pitches from a distance of 40 feet to home plate. 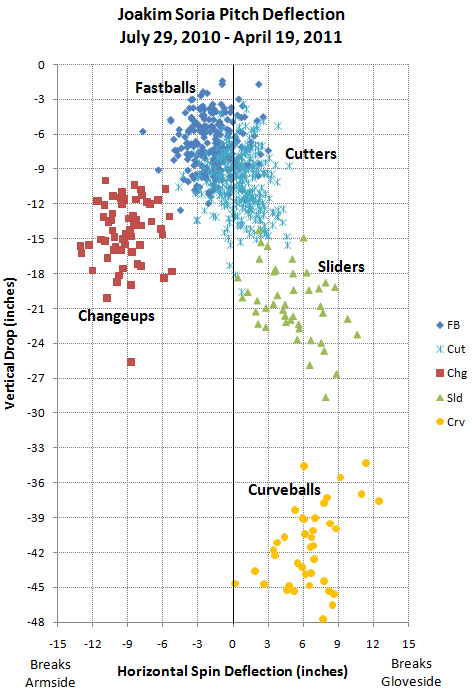 The faster of Soria’s two fastball types is labeled “fastball,” and the slower of the pair is labeled “cutter,” though both are really cutting fastballs. The slower cutter has about two inches more cutting action and three inches more drop than the faster pitch, on average. What motivated Soria to introduce the slower cut fastball? I have not found any discussion by Soria or his coaches in the media regarding the introduction of the new pitch, so I am left to speculate based upon the available evidence.

One might wonder why he didn’t simply throw more off-speed stuff, in light of those superior results. Firstly, he threw the fastball for strikes 68 percent of the time and the off-speed pitches for strikes 61 percent of the time, so he used the fastball to avoid walks. Secondly, the more often a pitcher throws his off-speed pitches, the more likely batters are to expect them and to improve their performance against them. The stronger the quality of a pitcher’s secondary offerings, the more often he can throw them, but there comes a point for every pitcher where the batters’ adjustments make increasing the fraction of off-speed pitches a net negative. Also, there was probably some luck and variance in performance by his fielders involved in those small-sample outcomes on balls in play.

In any case, Soria introduced the slower cutter on July 29, 2010; since then, he has had a swinging strike rate of only 6.8 percent on his fastballs, but his results on balls in play have improved markedly. He has allowed 27 hits on 94 balls in play off the fastballs, including two home runs, for a .287 batting average and a .404 slugging average. His off-speed pitches have had a swinging strike rate of 14.4 percent, with seven singles on 29 balls in play, for a .241 batting average. With the slower cutter in his arsenal, he has cut back on his off-speed pitch usage, throwing 78 percent fastballs.

Let’s look at the plate locations and results for Soria’s fastballs before and after the introduction of the slower cutter. 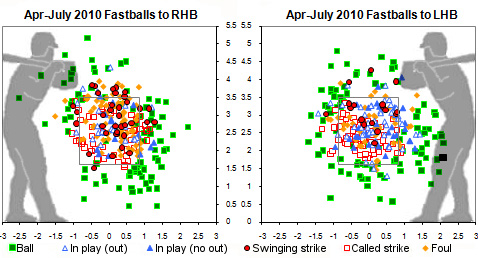 In the first half of 2010, with only one type of heater at his disposal, Soria mostly kept the fastball on the outside edge to right-handed batters. He was more willing to come across the plate to left-handed batters. 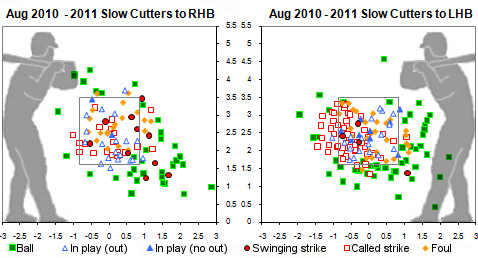 He has kept his slow cutter down, which is better for inducing ground balls, but in doing so he has missed out on the strikeouts at the top of the zone that a harder fastball could have gotten. 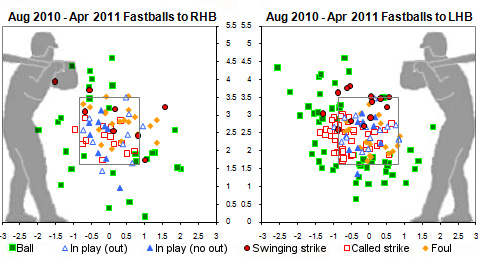 Soria also seems to have kept his harder fastball down more since adding the slow cutter, and if this trend continues, it would also contribute to a reduction in strikeouts. His groundball percentage on the harder fastball did rise when he introduced the slower cutter, and location in the zone may be the primary reason for that.

However, there is something else going on with Soria besides his change in fastball approach. Going back to 2007, his off-speed pitches were his out pitches, especially the curveball.

In 2007 and 2008, the curveball was his primary strikeout weapon. In 2009, his curveball declined somewhat in that capacity, being replaced by the changeup. In 2010, the curveball fell off the map as an out pitch for Soria, and he turned to his fastball to make up the difference. However, fastballs, especially when thrown at what is for the major leagues a very average 92 mph, make poor strikeout pitches. Presumably this is what led Soria, with his curveball failing him, to introduce the slower cutter to pitch to groundball contact instead of serving up home runs to go along with the strikeouts on his fastball.

What is wrong with Soria’s curveball? Why isn’t it the strikeout pitch it once was? In spring training, Royals manager Ned Yost commented on Soria’s curve:

“He used it a lot before I got here and would get a lot of guys out with two strikes but last year I can't remember when he got a guy out with a two-strike curveball. He'd bounce it or throw it for a ball,” Yost said. “And he threw it for a strike twice today so Jack's back on top of his game.”

Yost was not the only one to notice Soria’s struggles with the curveball in 2010. A number of people at Royals Review mentioned his trouble with command of the pitch. Soria himself identified the curve as a candidate for improvement in an interview with Bob Dutton this spring. “My command can get better,” he said. “My curveball can get better. It’s been off for a couple of years. It’s not the same as it was my first year. I can improve that.”

When Soria and others say his curveball has been off, what do they see? Let’s look at the height of his curveballs as they crossed the front of home plate and the resulting action by the batter. Pitches with a height below zero are curves that Soria bounced in the dirt in front of the plate. 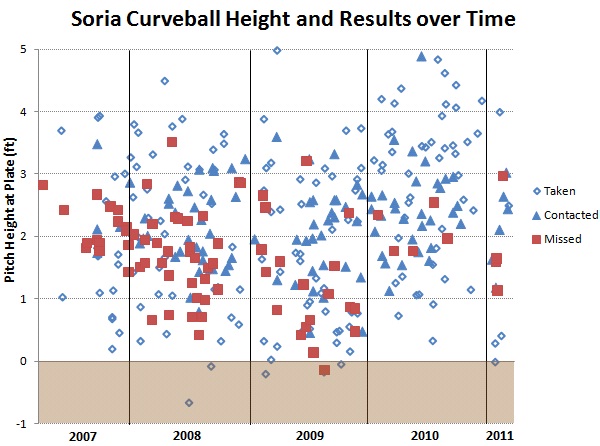 Soria got a lot of whiffs on his curve in 2007 and 2008, including whiffs in and below the strike zone. In 2009, he still induced batters to swing through the curve, though not as often as before and mostly on low pitches, particularly after he returned from a rotator cuff strain in June 2009. In 2010, he got very few whiffs on the curve and elevated many of them in the zone or even at eye level.

Let’s look closer at the plate location and results for Soria’s curveballs in each of those three time periods. 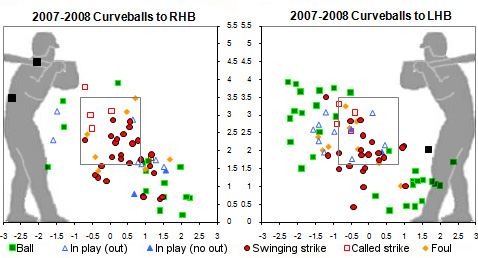 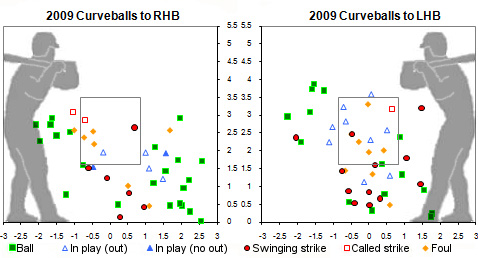 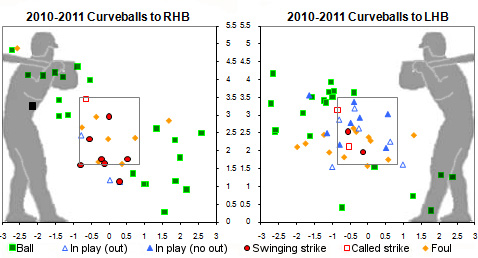 Soria’s swinging strikes on the curveball dropped from 2008 to 2009 and again in 2010. We can also see that the distribution of the pitch locations was tighter in 2007-2008 than it has been since then. It appears that Soria has not been able to command his curveball well over the last couple years. His inability to spot the pitch on the outside corner has allowed batters to lay off and let the curves pass for called balls.

Soria has not suffered a decline in his fastball velocity in 2011. He did, however, alter his pitching approach during the 2010 season, introducing a slower cutter to get groundballs as his curveball command faltered. It remains to be seen how this approach will play out in the long run. The successful closer has departed from the high-strikeout ways of his past, and he may now be more prone to allowing groundball singles. However, he seems to have a solid group of weapons in his arsenal even without the killer curveball. The current approach served him well in the last two months of 2010, and the struggles of this April are probably not a sign of the impending collapse of his pitching ability.

His results since adding the slower cutter have been quite impressive by the standards of most pitchers: a 2.10 ERA in 34.1 innings, with 29 strikeouts against nine walks and 25 hits, one of them a home run. If Soria is still walking as many men as he strikes out by the All-Star break, there will be reason to worry that something more serious has gone wrong, but at present, I see only a pitcher who can achieve success with a different style, though perhaps without the dominance he exhibited in years past.

Reply to fawcettb
HankScorpio
This is phenomenal work, Mike. Thanks very much.
Reply to HankScorpio
redsoxin2004
Fantastic information.
Reply to redsoxin2004
mikefast
Thank you all for the kind words.
Reply to mikefast
SaberTJ
Awesome stuff!
Reply to SaberTJ
JeffZimmerman
Mike - Not sure why I even try to dabble in Pitch FX when you put stuff out like this.
Reply to JeffZimmerman
rselzer
A+
Reply to rselzer
holgado
Great stuff.
Reply to holgado