The Minnesota Twins have the somewhat unique distinction of being left wanting by Francisco Liriano’s performance—not just his early-season struggles, but his body of work as a pitcher. Manager Ron Gardenire told reporters:

We've told him forever that he's a strikeout pitcher. We understand that he can strike people out, but if he really wants to become a pitcher, pitch to contact. Use that two-seamer and use that slider down and in every once in a while, and that changeup, but pitch to contact early. That'll get him deep into games.

Because his stuff is so good. There's times when you need to go for the strikeout. That's when you save your Mr. Nasty, as they say. You throw the nasty pitches then. But those other times you need to pitch to contact to get you deeper into games. When you want that big strikeout, maybe with a man on second, and you've got an open base, take your shot with your stuff.

Let’s take a look at it through the lens of K/9. Why K/9, you may be asking—well, K/9 is just strikeouts per out times 27, which makes it a very good measure of how a pitcher gets his outs, independent of how many outs he gets (this will become important in a second). Let’s look at the relationship between K/9 and pitches per plate appearances, examining pitchers with more than 120 IP from 1993 to 2010: 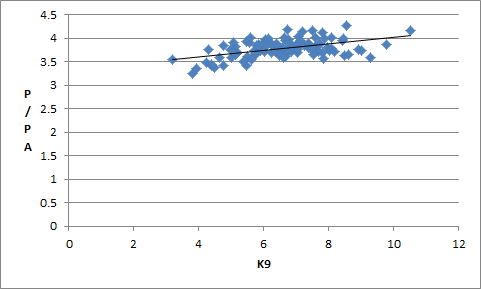 Yes, utterly shocking, I know. Strikeout pitchers will throw more pitches to the batters they face than other pitchers. (The correlation coefficient, if you’re wondering, is .49.) And it’s pretty simple to see why this is the case—a strikeout requires at least three pitches, while an out on contact requires only one.

So case closed, right? Pitching to contact allows a pitcher to end a plate appearance with fewer pitches, which should help pitchers get deeper into games, right?

But we’re missing a key piece of information—how many outs a pitcher records per plate appearance. Looking at how K/9 correlates with outs per PA: 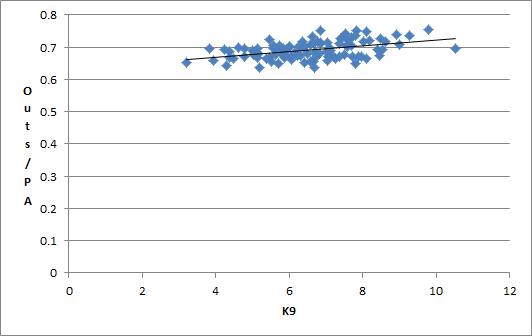 What’s interesting here is that by using K/9, we’ve chosen a measure of a pitcher’s strikeout ability that is not intrinsically correlated with his total number of outs—if we’d used K/PA instead we’d see a higher correlation. (As it is, we see a robust .44, nearly the same as what we saw for K/9 and pitches per PA.) What the data is telling us is that while strikeout pitchers do in fact throw more pitches per batter they face, they can make it through an inning while facing fewer batters. In terms of pitches per outs, then, the two effects counterbalance each other to some extent—we see a modest .12 correlation between K/9 and pitches per out.

So what does this mean for Liriano? Let’s take a look at outs per contact and outs per noncontact to see how they correlate with rates of contact and noncontact outcomes per plate appearance: 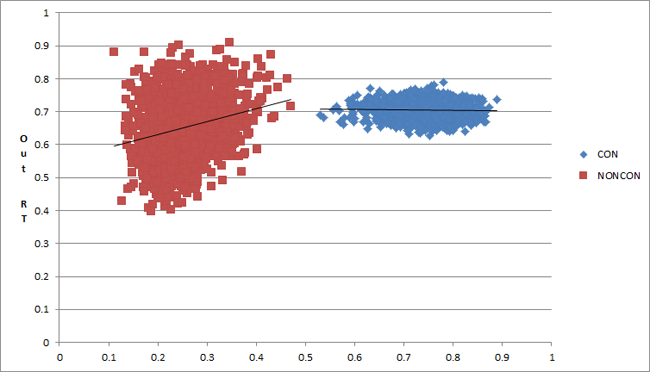 The red blob is outs per noncontact events—K/(K+BB), in other words. What we can see is that there is a weak but real relationship (R of .24) between a pitcher’s (K+BB)/PA rate and his K/(K+BB) rate, so pitchers with higher noncontact rates will tend to have more strikeouts per noncontact than other pitchers. We see no significant correlation, however, between outs per contacted ball and the number of contacted balls a pitcher allows (R of -0.03, so not only is it not significant, it actually runs the other way: pitchers who allow less contact appear to get more outs on contact, although again, this isn’t significant).

But what about Liriano in particular? Is he the sort of pitcher who would benefit from pitching more to contact? Well, for pitchers in the study, we see a .70 outs per contact rate, compared to .66 for outs on noncontact. In other words, assuming that everything else stays the same, the typical pitcher may in fact benefit slightly from pitching more to contact (that, of course, being a rather generous assumption, given the correlation we see). But for Liriano, while we still see a .70 rate of outs per contact, we see a .73 outs per noncontact rate. So, if Liriano begins pitching to contact more (assuming his K/(K+BB) rate does not increase as his contact rate increases, which I think is reasonable given the above), he’s going to see an increase in the number of batters he has to face to get through an inning. Rather than letting him pitch deeper into games, it’s going to make him less efficient in terms of batters he faces. Rather than making him more of a pitcher, it would probably just make him a more ordinary pitcher.

You need to be logged in to comment. Login or Subscribe
irussma
While it's not statistically significant, it does make intuitive sense that pitchers who allow less contact would also get more outs per contacted ball. It stands to reason that pitchers who get a lot of swings and misses would also get a lot of swings and near-misses, inducing weak contact and thus easy outs.

Anyway, great article. One of the maddening things about the Twins (not that they're the only organization that does this) is that they seem to try to force players to be something they're not. Hence David Ortiz's lukewarm performance as a Twin, for example. Then again, they tend to win, so who am I to complain?
Reply to irussma
SaberTJ
Great article Colin
Reply to SaberTJ
Richie
It's just logically insane to suggest that letting the hitters make contact with the ball can be preferable to not letting them make contact with the ball.

Billy Martin, in his sober moments, hated 'setup pitches', tho' not for reasons related to pitching deeper into the game. There seems to be some rule that, when a pitcher gets the hitter 0-2, the next two pitches have to be thrown nowhere near the plate in order to 'set the hitter up'. Maybe honestly try for a corner on 0-2, understanding that you'll then give up some 0-2 hits? Is this what Halladay does in order to work so deep into games?
Reply to Richie
rawagman
Good article, but I wonder if "pitch to contact" is simply a misnomer. Instead of telling his pitcher to let the other guy hit the ball, what if he is simply telling him not to try to be so fine, but rather, to throw quality strikes - to force the opposition to swing. I saw the same problem last night with Kyle Drabek - he had a tendency to nibble, seemingly trying to coax the batter to swing at pitches out of the zone. I think "pitch to contact" is old-school baseball speak to throw strikes.
Reply to rawagman