Had there been an unlikely comeback on yesterday’s slate of games, it would have served as the subject of my lead-in. Since no teams were kind enough to supply one, let’s forgo a lead-in and dive right into the wacky world of win expectancy. Baseball Prospectus houses win expectancy tables for all years over the Retrosheet Era (1954-2010), and The Hardball Times provides a Win Probability Inquirer that uses a theoretical model. I sifted through Retrosheet data to dig up some tidbits on historical win probability, focusing on some of history’s most improbable comebacks.

There have been 4,000 instances since 1954 in which a team has trailed by four runs with nobody on and two outs in the top of the ninth inning. Not once has a team come back from that deficit. According to theoretical win expectancy, that should have happened several times by now. Another 5,000 attempts have been made down by 5 or 6 runs, but the away team still has yet to come through. On a more exciting note, let’s look at some long-shot teams that did rise to the occasion.

May 10, 2000, Brewers at Cubs
The home team has trailed 2,598 times in the bottom of the ninth with two outs and no one on. On May 10, 2000, the Cubs had blown a 3-1 lead in the eighth inning and trailed 8-3 in the ninth. One home run, two errors, and four walks later (three of the walks handed out by Bob Wickman), the game headed to extra innings, where the Cubs prevailed in the eleventh.

We would predict that a team would come out on top one out of every 2500 times in the situation detailed above, and the Cubs were that team. Down six runs but otherwise in the same spot, the chances of a comeback are half as likely, yet that feat has been accomplished once in 2000 tries as well.

July 28, 2001, Astros at Pirates
The Pirates had cut Houston’s lead to three in the ninth when the Astros brought Billy Wagner in to close it out. Wagner beaned Jason Kendall to load the bases, bringing Brian Giles to the plate. Giles launched a two-out walk-off grand slam to add 90 percent in win probability to his team’s effort, the most a batter can add in a single swing. This feat, a two-out, walk-off, “ultimate” grand slam has been achieved only 14 times, none of them more improbable than the Pirates’ on the heels of a six-run comeback, with Billy Wagner facing a left-handed batter. Adam Dunn in 2006 was the latest to go yard in this situation, doing so off of Wickman, who seems to have been on a one-man mission to incite unlikely comebacks.

That was what Tommy Lasorda told the L.A. Times after managing the only team to blow an eight-run lead in the top of the ninth. Lasorda was steaming mad, but he still couldn’t hold a candle to Lou Piniella, who on that day was ejected from the game he managed, ripped out first base, and chucked it into right field en route to his team winning 8-1.

Don’t call it a comeback?

June 8, 1989, Pirates at Phillies
This was the only time in the Retrosheet era that a team has ever allowed a double to the leadoff man after taking a ten-run lead in the top of the first inning. You would think that team would be in a good position to win, and so did Pirates announcer Jim Rooker, who said, “If we lose this game, I’ll walk home.” They lost. That unusual situation has a two percent theoretical win expectancy and a 100 percent historical one. Retrosheet’s files contain no information on how Rooker got home.

June 22 1970, Orioles at Red Sox
July 20, 1976, Yankees at White Sox
I challenge anyone to think of a more simultaneously mundane and unusual situation in a baseball game than the top of the second inning with the trailing team down by six runs with batters on first and third and no outs. That exactly confluence of events has occurred twice in the history of baseball, and both games turned out to be remarkable for other reasons. In 1970, the Orioles did little damage in the second inning, but got to Boston’s Sparky Lyle for three runs in the ninth to earn the win. Six years later, the Yankees matched the Chicago’s seven-run first with seven of their own in the second and went on to win the game in a five-run laugher.

Historical win expectancy has shifted throughout the years. Here is the win expectancy for the home team when the first batter of the game comes up, also known as the home-field advantage: 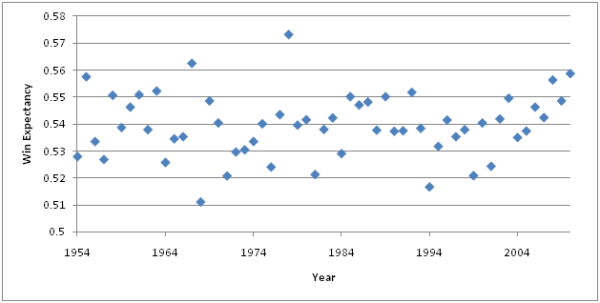 Finally, the age-old question: is it better to get the leadoff man on or have the leadoff man homer, cashing in a run but supposedly “killing the rally?” A homer to lead off the game has historically brought a team’s win expectancy up to 55 percent. Putting the leadoff man on first, however, only neutralizes home-field advantage, sending win expectancy to an even 50 percent. When Tim McCarver made the claim that a leadoff walk was preferred to a leadoff homer, he was likely reflecting on his near-MVP 1967 season, when teams that led off the game with a home run won only 30 percent of the time.

You need to be logged in to comment. Login or Subscribe
kmbart
Rooker took the team charter back to Pittsburgh after the game, but later in the year he started a charity effort in which he solicited contributions based on mileage, and then walked from Philadelphia to Pittsburgh. A man of his word and a walkin' fool, that Jim Rooker!
http://en.wikipedia.org/wiki/Jim_Rooker
Reply to kmbart
zasxcdfv
What about this great Mets comeback against Curt Schilling?

http://www.baseball-reference.com/boxes/NYN/NYN199905230.shtml
Reply to zasxcdfv
escapeNihlism
it shows WPA in the play-by-play. Met win probability bottomed out at a rounded 2%.
Reply to escapeNihlism
escapeNihlism
this is the better example:
http://www.baseball-reference.com/boxes/NYN/NYN200006300.shtml
Reply to escapeNihlism
terryspen
Or the Indians overcoming the Mariners' 12-0 and 14-2 leads on Aug. 5, 2001, to win 15-14 in 11?
Reply to terryspen
benharris
Winning that game would have given Seattle a record 117 wins as well.
Reply to benharris
jgreenhouse
Yes, though that didn't show up in the scope of my research, meaning that similar game states must have occurred at least once in some other game, I should have made note that 12 runs is the largest deficit overcome.
Reply to jgreenhouse
NYYanks826
I still remember a Yankees/White Sox game back in 2007 where each team put up matching 8 spots in the 2nd inning. I'd imagine that's the only time that's ever happened, and that probably produced a pretty wild spike in the win expectancy table for that game.

I think the White Sox ultimately won that game.
Reply to NYYanks826
BrewersTT
I'm not sure a pitcher would like to be known as a "walkin' fool" (see BP article earlier this week about ridiculous displays of wildness) but that is a cool thing Rooker did.

There was a 14-run bottom-of-the-9th rally at Virginia Tech to win 15-14 some while ago, but darned if I can find anything about it on the web. Somewhere I have a clipping. I'm sure the situation is rare enough that the empirical probability of success would be rather high since it was actually done once, but I'd be interested to know what the odds were given ordinary distributions of runs in an inning.
Reply to BrewersTT
drawbb
Only McCarver, Morgan, and other members of the Flat Earth Society would go on record with an assertion that preposterous.
Reply to drawbb