When the Pirates traded Nate McLouth to the Braves, a key piece of the return was Charlie Morton. Then a 25-year-old with a live arm and little big league success, not much has changed in the two and a half seasons since. Morton’s career with the Pirates entering his Monday night start in St. Louis included 35 starts, a 5.91 ERA, and a 1.83 strikeout-to-walk ratio. The 2010 season was particularly cruel to Morton as he missed five weeks due to shoulder fatigue in between posting an ERA over 7.50. Despite the gaudy runs allowed totals, Morton’s SIERA remained reasonable at 4.26 thanks to solid groundball rates (48 percent last season) and a career best strikeout rate (6.7 batters per nine innings pitched) combined with a career low walk rate (2.9 batters per nine innings pitched).

Morton credited a strong spring to dropping his arm ever so slightly in his deliver. The new arm angle was on display within a stadium with pitchfx data for the first time on Monday night and the results confirm the change: 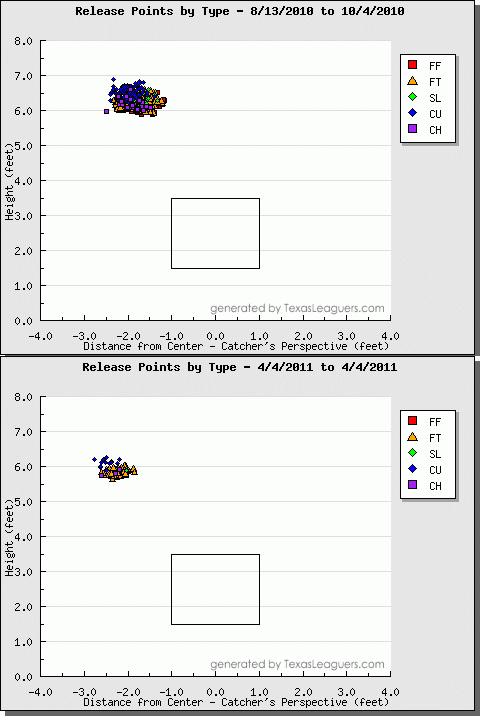 A new arm angle is nothing without improved results and Morton’s first start of 2011 brought a mixed bag. On one hand, his peripherals are unimpressive thanks to five walks and only two strikeouts. That’s not a recipe for success in the upper minors, not along the majors. Yet, Morton allowed only one run because he placed his low-to-mid-90s sinker down in the zone all night and the Cardinals never adjusted, instead pounding the pitch into the ground time after time. The result was 17 batted balls comprised of 15 groundballs. Add an infield fly to the total and it’s no wonder the Cardinals managed only one extra base hit off Morton on the night –that coming on a ground-rule double that was hit on the ground. The highlight of the night was Morton retiring Albert Pujols three times on bouncers to third. Conversely, the walks are a concern, but it was Morton’s first regular season start, so they can be pardoned.

If Morton continues handing out free passes heading forward, eventually a few too many inopportune grounders will bleed through the infield. In other words, 2011 will look a lot like 2010, except with the new arm angle in tow. For now, though, an adjustment in release point is something to watch for as Morton attempts to make good on possibly his last chance to stick in a big league rotation.


Thanks to Mike Fast for the pitchfx help and Texas Leaguers for the supplied graphs.