What makes Opening Day different from all other days? Every team is undefeated, and every crowd is a sellout. The sun is out (sometimes) and the grass is green. It’s a national holiday in the same vein as Columbus Day, but without all the messy genocide.

Winning a starting assignment on Opening Day is the goal of every major leaguer. On Opening Day, managers start players they feel give their teams the best chances to win not only on that day, but for the rest of the year. Those who play on Opening Day are not only healthy, but often in the best shape of their lives. They also don’t have arbitration clocks that can be manipulated by forcing exile to the minors until May or June.

Since 1954, 2900 players have started Opening Day games, and 240 have made their major-league debuts as Opening Day starters; last season, Austin Jackson, Jason Heyward, and Scott Sizemore were the lucky three. In 2001, rookies Albert Pujols and Ichiro Suzuki entered the majors on Opening Day as two of the top players in the world.

The list of players with at least 20 Opening Day starts is as follows: 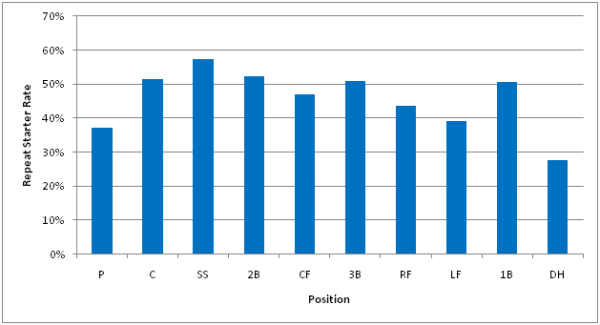 Dwight Evans and Julio Franco started on Opening Day at eight different lineup slots. Here’s an illustration of how teams might value lineup slots—by which I mean how they value number one, three, four, and nine hitters (pitchers). 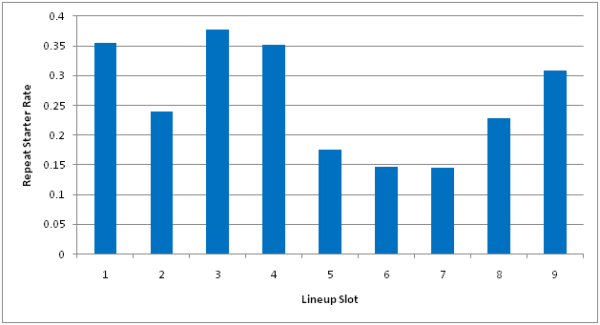 The high point for repeat starter rate came in the late 70s and early 80s, when 60 percent of players returned to start on Opening Day for the same team in consecutive years. Now, as the cliché goes, we’re more likely to be cheering for laundry come Opening Day. 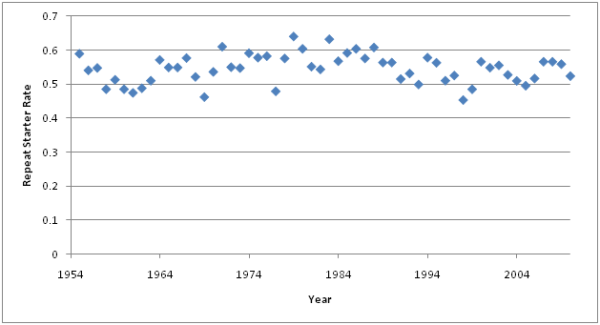 Since 2000, no team has been more stable with its Opening Day roster than the Phillies, while the Padres and Pirates have had the most turnover. 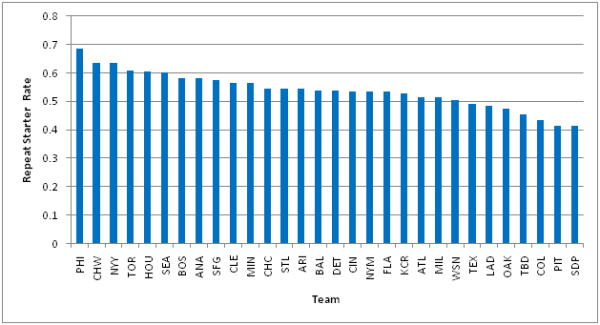 What is the significance of a team having year-to-year consistency with its Opening Day starters? The only teams to start the same ten players in two consecutive Opening Days were the 1979-1980 Baltimore Orioles, who won 100 games in 1980. Grouping by the number of starters who returned from the previous year, here is the winning percentage of all teams since 1954. 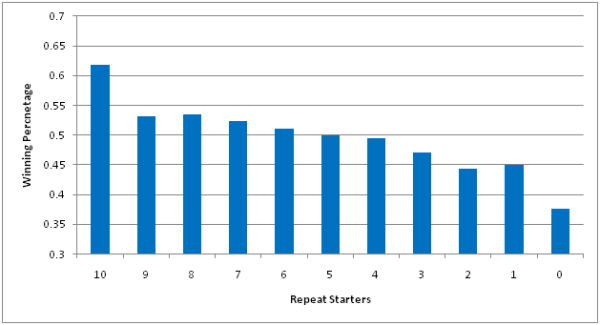 This is the result of selective sampling, as good players are brought back to start on Opening Day much more often than bad ones.

You need to be logged in to comment. Login or Subscribe
NYYanks826
Do you happen to have any specific examples of teams that turned over their ENTIRE roster between one Opening Day and the next? The most recent team possibly coming to mind would be the 1998 "Fire Sale" Marlins.
Reply to NYYanks826
jgreenhouse
When I ran this analysis, I actually included expansion teams as those with entirely new rosters. Not sure if that was the right call. It turns out that no non-expansion team has started Opening Day with 0 of its previous years starters. Therefore, the 0 data point is showing you the winning percentage of expansion teams.

The Marlins have twice started years with only one opening day starter retained from the previous year, and the 1991 Atlanta Braves actually went 94-68 under this criterion.

The 1980 O's kept all 10, and there have been several non-DH teams keep 9. The 1970 Os went 108-54 by using the exact same opening lineup as the previous year. The 1971 Twins went 74-86. Others, the 1971 Twins, the 2004 Phillies, 1978 Dodgers, and 1968 Cardinals.
Reply to jgreenhouse
fatted
It's easier to be happy with your team returning the same players if you won previously. The Phillies, White Sox, and Yankees fans are probably fine seeing their teams at those spots, but I can't imagine the Blue Jays, Astros, or Mariners fans are very pleased to see that.
Reply to fatted