Consider this hypothetical: Bud Selig has had enough. He’s sick of hearing that his league lacks competitive balance, sick of thinking about Albert Pujols’ impending free agency, and most of all, he’s sick of watching the impossibly tan Adam Schefter interview the improbably crimson Roger Goodell. Selig’s first recourse: to cut his own salary to 50 cents per annum. With that act of magnanimity achieved, the players have no choice but to accept Selig’s radical proposal: the Rule X Draft. Selig guarantees the salary of every MLB player, but places them all into a draft-eligible pool. The owners are to hold a real-world fantasy draft.

Now the focus is no longer on what team Pujols picks, but on what team picks Pujols. Immediately, owners begin jockeying for position. Desperate for Pujols to play in his home town, David Glass tells Selig that if granted the first pick, he would allow Selig’s wages to be increased to the federal minimum. The Wilpons one-up Glass by offering Selig an insider trading tip in exchange for the first pick. How valuable must that first pick be to justify so much interest?

The era of “Pujols, the Best Baseball Player Alive” dawned some time ago. If we were to retroactively predict each upcoming season’s WARP based on a player’s age, his WARP in each of the previous two seasons, and whether or not he was a pitcher, Pujols would claim the crown for each season since 2005, when he dethroned Barry Bonds.

Pujols has routinely been projected for between seven and eight WARP—he is again this year—yet he’s been delivering between eight and 11 WARP annually. Meanwhile, the parade of would-be number-two picks—Zack Greinke, Hanley Ramirez, David Wright, Miguel Cabrera, Bonds—have been projected for six WARP but have delivered closer to five. That means that if our hypothetical all-hands-on-deck draft had taken place within the past five years, the difference in WARP between the top pick and the second pick would have equaled the difference between the second pick and the last pick.

That Pujols has outperformed his projections and the Greinkes and Bondses have fallen short of theirs signifies some noise in the data, so I turned to a regression. Using projected WARP, I determined where every player would have been picked in the all-MLB draft and found the average WARP that each slot would have produced. 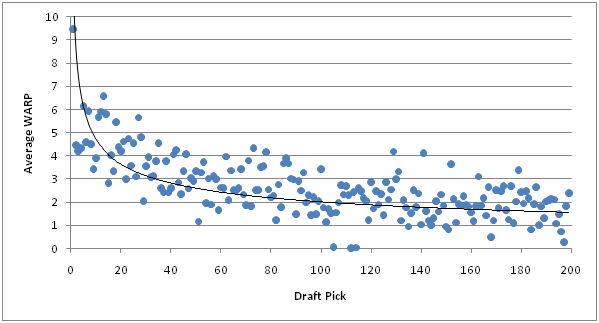 What if there were 10 teams and the draft ran only 260 players deep? (Yes, it turns out that this is about fantasy baseball.) In that case, it might be fair for every round after the first to proceed in reverse order. With that format, even given the higher replacement level involved, Pujols would still be worth a second- and a third- rounder.

Since Yahoo now allows fantasy owners to trade draft picks, Selig has some thinking to do.

Before concluding, I want to point out that the curve I came up with above actually highly resembles the result of something similar that Sky Andrecheck did with the Rule IV draft*. Sky wrote, “The data certainly isn't linear, but instead seems to follow a definite power law and can be explained by the following formula: WAR= a * (selection#)^ b, where a and b are the parameters of the model.” The parameters for Sky’s first six-year WAR model make a=10.9 and b=-.52. The parameters for my above WARP model make a=10 and b=-0.4.

Those nearly indistinguishable coefficients should tell you a bit about the proximity in value between top prospects and top major-league players. We can't compare salaries between the two because draft picks’ salaries are artificially deflated, and it's difficult to find examples of top picks getting traded for top players, since teams with top picks normally aren't in positions to compete. However, in 1996, we got a glimpse into how the free market regards each class of player when Travis Lee and Matt White, top-ten draft picks that June, were subsequently granted free agency thanks to some astute loopholes uncovered by Scott Boras. Both Lee and White signed for $10 million. The top earner in the majors that season? Cecil Fielder, who made $9 million.

*One final note: now that it appears that Gerrit Cole and Anthony Rendon are the consensus 1A and 1B selections in the upcoming draft, we should keep in mind that Rendon is the better pick. This isn’t Stephen Strasburg vs. Dustin Ackley—scouts perceive comparable value between Cole and Rendon. Therefore, unless the paradigm for scouting amateurs has shifted, Rendon, the position player, has much higher value.