You know only too well how this particular saw goes: It's hard to find good catching, it's always in short supply, and sometimes it's a matter of stocking the slot with a player familiar with the tools of ignorance, merely as a matter of having enough receivers to go around. Catchers are hard to find, donchaknow.

As a result, there are also are our favorite targets, the symbols of the kinds of catchers you didn't want to be stuck with if you were running a fantasy team, or stuck rooting for if your club had the mixed fortune to wind up employing them. No matter what vintage your fandom dates from, you know who I'm talking about: In the '80s, you were probably making fun of a decision to play Bob Boone daily, in the '90s you were mocking Brad Ausmus, and by the Aughties maybe Dioner Navarro was the target of your informed derision.

However, this is also a matter already getting front-page attention, not least because injuries are piling up, and sure enough, they involve more than a few catchers. As R.J. Anderson noted yesterday, the Astros are mulling their options when it comes to replacing Jason Castro for a full season, while Jay Jaffe has already made the observation that the Yankees would be well served to give top prospect Jesus Montero due consideration now that the reliably execrable Francisco Cervelli is temporarily excluded from the proceedings. In each instance, the remarkable possibility is that the Astros and the Yankees might wind up with good-hit alternatives to their presumed preferred options. If Ed Wade trades for Jesus Flores, he won't have cause for regret on the offensive side of the ledger, at least not if Flores stays healthy, while Montero's ability to outhit Cervelli is one of those sunrise/east-obvious propositions that surprises no one.

However, having both Flores and Montero wearing chest protectors would also represent part of a growing trend, one that defies the proposition that finding good enough offensive help behind the plate isn't quite so tough as it was once. If anything, we're in a golden age of catcher hitting, something that has everything to do with the adaptive choices teams are making to make sure they don't have to wind up with no-hit backstops. But before we get into the scope of this development and then move on to the possible reasons why, let's first look at catcher offensive performance by True Average spanning the full spread of Retrosheet-recorded history: 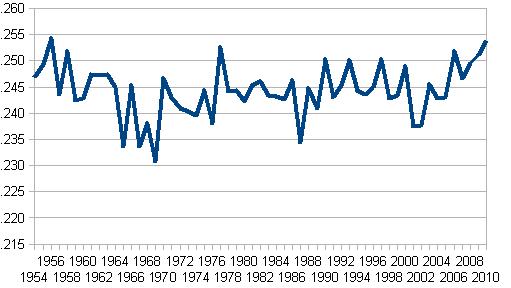 Voila, see? Things really are looking up in terms of offensive contributions from catchers. However, that's just the position-wide totals for plate appearances in terms of offensive performance over time, and—just for the sake of argument—maybe we're in an era where we have a very few, very great catchers. That information doesn't necessarily tell us about the shape of the performance of the entire population of catchers, it just describes the average value of catcher performance. So, let's split out the spread of population performance in different ranges of offense, aggregated in different historical eras, because that ought to add an element of context to the conversation. Keep in mind, this reflects the offensive performance of players as catchers, so it does not include their contributions at other lineup slots—Mike Napoli's playing time at catcher last season is what gets counted here, not his performance while at first base or DH.

Right there, the interesting development in terms of the present is that we're seeing better offensive production from people who play catcher now than since the so-called Golden Era (when the Boomers were hitting puberty, inventing sex, and so on) or the “High Mound” Age that gave us low-scoring games and the realization that things had gotten out of hand. These days, 38.4 percent of catcher at-bats are coming from better-than-average hitters, starting from the proposition that a .260 True Average is what you're supposed to get from an average big-league hitter.

But perhaps the equally interesting development from the sample is that we've never seen so few bad-hitting catchers. That 14.5 percent mark in the lowest group of catchers represents the least amount of playing time coming from any in the sample.

Admittedly, the last group benefits from being drawn from a shorter range of dates, and overall the cutoffs were anything but random: we've segregated the high-mound era, while also putting that stretch of time when PEDs became such an item of belated concern into their own group as well.

Even so, consider what goes into generating that result, versus what was happening in the '50s, for example. We have 30 teams now, instead of just the original 16. True Average is set to an absolute standard, so the fact that the demand for more catching has not had an impact on the amount of good hitting at the plate of those tasked with squatting behind it seems fairly interesting. We may not be in the age of Johnny Bench or Yogi Berra, but even without them, we're not mired in the age of Luis Pujols or Rick Sweet, let alone Jason Kendall and Koyie Hill.

Still, let's take this a step further, to get a sense of how many good-hitting catchers are out there. Good-hitting catchers are not an evenly distributed resource, after all—if you have two, there's no real reason you want to re-seed the rest of the league, when you might be better off having a starter and a spare. So what if we look at how many catchers producing in these individual groups there have been? In this next exercise, we take every catcher/season with 100 plate appearances or more at catcher, to get a general head count of how many catchers were available in their leagues in each date range, independent of how much playing time they got.

Here again, the results tell us something you probably didn't expect, which is that we have a better collection of offensive talent behind the plate than at any time since the so-called Golden Age—when we had fewer teams, and needed fewer catchers. A full third of catchers with 100 or more PAs at catcher have produced above-average TAv marks in the last five years is the best mark since that smaller population of the '50s. Similarly, that 18.1 percent mark representing the weakest hitters—the Wil Nieves generation, if you will—represents the smallest group in that execrable cadre.

So, here we are, in the good times right now and right here, even without a Bench or a Mike Piazza or a Gary Carter. How did that happen? My own pet theory is that organizations have had the wisdom to expand on the pool of potential backstops, not unlike what our own Keith Woolner recommended back in the day. Examples of successful conversions of mediocre position-players to catchers abound—from Oakland's Terry Steinbach and New York's Jorge Posada (and later Russell Martin), to today, where Robinson Chirinos and Steve Clevenger represent examples from the Cubs' farm system alone, teams appear much more willing to give an adequate organizational-type hitter at another position a shot at claiming a big-league career for himself behind the plate.

That also seems to be playing a part in the decisions to take “bad-glove” backstops and let them be. Whether you want to talk about the Dodgers' decision to let Mike Piazza catch and be done with it, or the Indians' willingness to leave Victor Martinez alone, or the Pirates' embrace of Ryan Doumit, there has been a lot of patience with weak-fielding catchers because of the advantage they might provide in a lineup over competitors indecently running out the Kirt Manwarings or the like out there. Enough individual instances pile up, producing a stronger overall pool of receivers, even at a time when there seems to be no end of money available to spend on Fred Kendall's kid, let alone one of a dozen lesser Laudners available on the market, right-handed “power” sources with low OBPs and modest power contributions. But even that lot is doing some damage, contributing to a rising tide of catcher offense.

As a result, teams have better options than they used to. If your club's employing Kevin Cash or Wil Nieves, that has less to do with supply and nothing to do with demand—it's a reflection of deliberate selection, and gods above and below help those making that choice when better alternatives exist.

You need to be logged in to comment. Login or Subscribe
irussma
"So, here we are, in the good times right now and right here, even without a Bench or a Mike Piazza or a Gary Carter."

Joe Mauer and Brian McCann don't fit in that group? I'll grant that neither can match Piazza with the bat, but their best seasons are right up there with the best Carter and Bench ever did.
Reply to irussma
ckahrl
Oh, they do, definitely. Forgive the creative license, but I didn't want to turn this into an exercise of "Hall of Famers among us."
Reply to ckahrl
ScottBehson
This article, I think, illustrates how MLB as a whole is so much better in personnel decision-making so that there are fewer and fewer "market inefficiencies".
Reply to ScottBehson
chabels
Certainly Kevin would be able to answer more definitively, but it also seems there are more "blue-chip" catching prospects in the minors than in recent memory. In KG's Top 101:

Certainly some of that is due to teams desire to start prospects on the left side of the defensive spectrum and move "catchers" off the position later, but I do wonder if something else is at play as well.
Reply to chabels
irussma
True, and that's not even counting the top young catchers who just recently hit the big leagues. Santana, Posey and Wieters could all be superstars if everything breaks right. Plus there's some gems of lesser luster, like Josh Thole, Alex Avila and Jason Castro.
Reply to irussma
ckahrl
I'm not even a Mets fan, and yet for some reason seeing Thole put in that company makes me feel like he's being sold short. Not that that's a slight on Avila or Castro, but I just really like Thole.
Reply to ckahrl
irussma
I'm more saying that he's *not* in the same category as Santana or Posey or Wieters (assuming the good version of Wieters ever shows up) than that he's in the same group as Avila or Castro. If that makes any sense.
Reply to irussma
jnossal
I think what you have here is teams adapting to a different competitive environment than they faced in the 70s and 80s when the running game was far more prevalent that it is today. With less need for stud defensive backstops, whether perceived or actual, teams are sensibly opting for offense in the catching slot.
Reply to jnossal
ckahrl
That's the thing, though, is it really chicken/egg that way? I don't think the game has anyone as bad as Matty Nokes or late-vintage Fisk knocking around behind the plate these days, for example.
Reply to ckahrl