After Yankees fans swarmed Twitter and informed the world of Manuel Banuelos’ impending arrival on Friday night, I flipped over to the MLB Network. With a YES Network simulcast in full effect, there would be plenty of Yankee-related talk and hyperbole tossed about as Michael Kay and Ken Singleton provided audio to the images. As an added bonus, manager Joe Girardi partook in the spring delight: an interview during the run of play.

For Banuelos’ part, he looked about as good as you can. The buzzwords thrown around about his arm action and delivery—usually but not entirely limited to “smooth” and “effortless”—were on display. His fastball ran into the mid-90s, and he showed off his secondary offerings to good effect, even on back-to-back pitches—an attribute Girardi noted.The announcing crew spent time talking about how poised Banuelos appeared and wondered aloud whom he resembles on the mound (their answers: David Cone and Johan Santana). For casual observers, learning that Banuelos is 19 years old had to come as a shock, as he certainly did not look it, even with his smallish frame. Instead, he looked every bit worthy of the five-star designation that BP prospect guru Kevin Goldstein awarded to him.

Adding fuel to the flames of curiosity were Russell Martin’s comments after the game. Martin compared Banuelos to former battery mate Clayton Kershaw, while adding that he felt Banuelos might be “more polished.” It’s hard to blame the—let’s say, optimistic—Yankees faithful who wonder if there are other parallels in play between the two young southpaws. Banuelos will celebrate his 20th birthday next week on March 13, and Kershaw made his big-league debut just months after turning 20. With the Yankees in the midst of sorting out which veteran hurler will offend them the least over a few turns through the rotation, there are already enough thoughts of Banuelos sneaking into the majors later this year to consider having Banuelos match Kershaw on this score.

Even so, Banuelos is probably not going to make his debut this season. His long-term health and development are more important to the Yankees than whatever he could offer over a limited workload this season—remember, he’s topped 100 innings only once in his minor-league career. Still, some of the conversation about his ceiling has been interesting. One point revolves around whether Banuelos’ willingness to pitch inside against right-handed batters will place him amongst the game’s elite. The implications are intuitive: lefties are going to face a plethora of righties, and going inside successfully means the pitcher has good stuff, good command, or both.

Southpaws capable of pitching inside are desirable as arms capable of potential excellence, but maybe the idea is overstated. The graph below shows the average location of each left-handed pitcher with at least 1,000 pitches to right-handed batters since 2007. Like most PitchF/X-generated charts, the perspective is from the catcher’s point of view, with points to the left meaning inside to righties and points rightward meaning outside: 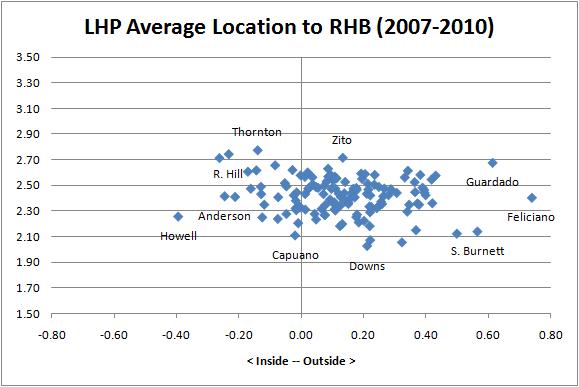 For the sake of a dramatic narrative, let’s start on the right and move left. The names you see are mostly left-handed specialists. Pitchers like Pedro Feliciano and Sean Burnett are guys you wouldn’t trust to babysit your right-handed kids, lest you return from an evening out to find them tied up and the children running wild. The further you head west, the more starting pitchers start to pop up: Jeff Francis, Brian Duensing (the chart captures him mostly as a reliever), Chuck James, Wade LeBlanc, Greg Smith, and yes, eventually Tom Glavine.

Jumping to the other extreme does not immediately bring blazing fastballs or awe-inspiring stuff to the forefront. Instead, J.P. Howell stands out as the most likely to toss inside, despite having a fastball that often sits in the mid-80s. From Howell, there starts to be a semblance of plus-velocity with Mike Gonzalez and Billy Wagner before hitting the bricks with Rich Hill. After which, elite starters like Brett Anderson, Jon Lester, John Danks, and Johan Santana begin to pop up.

This format only tells us so much. To adjust, let’s move the boundaries in from 2007 to 2008, but keep the 1,000 pitch threshold, except this time only for pitches classified as fastballs. Rather than looking at the average location, instead this will look at the percentage of pitches thrown on the inside corner (for the sake of argument, this is defined as any px value less than -0.83). Here are the real inside guys:

And those leaving their pitches on the outside:

While there a few quality pitchers who work away (mostly relief types, with Garcia, Francis, and to an extent Duensing representing the main exceptions), the talent level appears higher for the arms willing to go inside. Lester, Anderson, Danks, and Hamels are four of the best pitchers going today. Understatement ahead: Santana had a nice run himself. Thornton is arguably the best left-handed reliever in baseball. And the longevity of Oliver and Moyer is worth noting.

Of course, these are just the extremes, and exceptions to the rule can be plucked without effort. The league-average mark is around 16 percent, yet Cliff Lee is under 12 percent. David Price and CC Sabathia—two fellas with good fastballs and sliders—are also below average by this measure. There are stinkers who work inside too: Mark Hendrickson is very tall and therefore supposedly very scary, yet working inside on righties a little over 19 percent of the time has not led him down the road to riches.

Getting back to Banuelos, he’s still a risk, as are all 19-year-old arms, and the sample size being discussed is one game—and not even a complete one or a start at that. There are still plenty of questions to answer, like Banuelos’ exact percentage of inside pitches. His willingness to go inside against batters many years his senior is ostensibly a good sign, but scouting observation is the only data we have to go off.

As for whether Banuelos’ velocity adds to the advantage, John Walsh did a study on the subject of inside fastballs in early 2008 and found velocity was of the utmost importance on inside fastballs, but relatively unimportant on outside pitches. In other words, Banuelos should be able to work inside to righties, and although that alone does not guarantee entrance to Aceland, it certainly does not hurt.

Big thanks to Mike Fast for research assistance.

You need to be logged in to comment. Login or Subscribe
texasoldham
I wonder what the success rate would be if Cliff Lee, David Price, or C.C. decided to throw inside more to righties. Would they get even better? Did they get burned early in their careers and stopped trusting themselves? Is there a pitching coach that drilled it into their heads to stay away from throwing righties inside?

I wonder too, what is Lester's success rate throwing inside? Is he doggedly determined to own the plate regardless of outcome, or does he experience greater success when he does throw inside as opposed to keeping away?

A great idea for a table and graph. Further analysis could really flesh these tendencies out.

Reply to texasoldham
prs130
didn't glavine go from an outside guy to a both-sides-of-the-plate type pitcher? I seem to remember him attributing a career resurgence to throwing inside.
Reply to prs130
tcgoldman
Excuse me for the plug, but this website deserves it. Apparently Jon Lester does NOT fare well pitching inside to RHB.

Though going to high and low on the inside is a bit better for him.
Reply to tcgoldman