It's cliche to say, I know, but "Pitchers and catchers report!" are truly four of the sweetest words of the year. I know I was quite pleased to finally, officially hear the words for the Brewers on Wednesday morning. The best I can tell, there is only team left in all of Major League Baseball who is still waiting to say those words, and that should be rectified tomorrow when Marlins players finally get to camp.

In honor of the official start of baseball season – the nine months of the year, from February through October, where professional ballplayers are working hard so we fanatics have something to hope for, argue over, and complain about – I created a postcard for everyone as a sign of celebration. Think of it as one of those "GREETINGS FROM ARIZONA" cards that a buddy might send on his trip to Spring Training, except this one is sent from me to all of you. 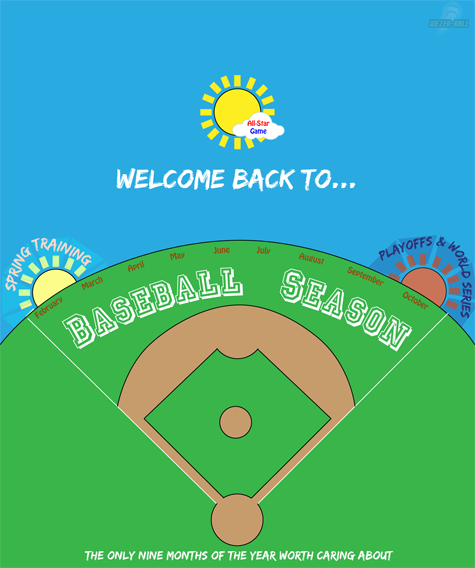 We may not all be in Arizona or Florida, but that doesn't mean we're not excited to have baseball season back. Now let's hurry things up and start playing some meaningful games!

You need to be logged in to comment. Login or Subscribe
crperry13
Dang, I need to print this and put it on the wall of my cubicle, to help me remember that there are things worth putting up with work for.
Reply to crperry13
dianagramr
AWWWWW ..... cute!
Reply to dianagramr
BurrRutledge
Larry, you misspelled November!
Reply to BurrRutledge