Most baseball fans can name at least a few Scott Boras clients, thanks to having suffered through each step of their contentious free agencies in the local papers. Even those few fans whose teams have been light on the sort of special talents that the 58-year-old super-agent delights in representing have likely been exposed to his grandstanding style at some point, thanks to their immersion in the never-ending baseball news cycle. As a result of that notoriety, a handy reference guide to Boras clients is only a click away, something that can’t be said for most other agents, no matter how high-powered. But while Boras has garnered a disproportionate number of headlines in the player-representation department by virtue of being a superb self-promoter who’s also extremely adept at his job, he’s hardly the only agent option out there.

As has been hinted at elsewhere, we’re currently in the process of revamping our player cards to offer a wealth of new information in a more easily digestible manner. Thanks to Jeff Euston, BP author and proprietor of Cot’s Contracts, that content will include salary and agency data, both of which should— despite some unavoidable limitations—offer new reasons to while away the hours without pointing your browsers away from BP. To whet your appetites for the approaching rollout, I thought I’d offer a quick look at the powerhouses of the agent biz. Consider this the most cursory of introductions to the power players involved (for a more in-depth perspective on the nuts and bolts of the agent landscape, check out Josh Kusnick’s series at BP or Jerry Crasnick’s License to Deal, or simply wait until you’re free to explore the data on the new player cards for yourself).

The first thing that becomes clear upon exploring the agent data is that players aren't especially forthcoming about whom they choose to represent them. Relationships with agents are a lot like those with significant others: sometimes they last forever, but more often (actually, with Valentine’s Day safely behind us, we can probably admit that it’s more like most often) they don’t. When a player feels that his needs aren’t being met by his current business beau or finds himself professionally seduced by another sweet-talking, suit-clad swain, a “Dear John” letter usually isn’t far behind; both Robinson Cano and Nick Swisher have bid their old agents adieu in the last two weeks alone.

Despite the transparent nature of those two Yankees’ splits, players aren’t much more likely to issue a press release when they break up with their agents than you’ve been on the occasions when you’ve said so long to a romantic partner—while the information often eventually gets out, especially in the cases of high-profile players, it doesn’t always. Since preserving his or her clients' privacy is part of the typical agent's job description, it’s not always possible to confirm representation at the source; in recent years, some agencies have begun to list their client rosters online, but a few of the largest have resisted this trend.

As a result of Jeff’s work, we have salary data for roughly 800 players who spent time in the majors last season, but we currently lack agency affiliations for roughly 300 of them (although the unknowns in both cases skew toward more modest talents). Tracking down player agents is a tough task, and the incomplete information we do have represents countless hours of work by Jeff, who’s been assembling the data since approximately 2001. Since agency affiliations aren’t publicly announced, the ones we have on record come primarily from news accounts and are entirely unofficial, as well as potentially out-of-date in certain instances.

As a result of these handicaps, it's difficult to do any sort of rigorous analysis with the information at hand, though it should shortly serve as a useful resource if you're hoping to satisfy your curiosity about which agent is paid to be at any individual player's beck and call. Still, we can have some fun with the names we do know. Here’s how the 2010 agency affiliations shook out among the players we have records for, giving retroactive credit to each player's current agent wherever possible. (Remember, because of the information we don’t have, we can’t assume that these slices are accurate representations of each agency’s portion of the entire major-league pie.) 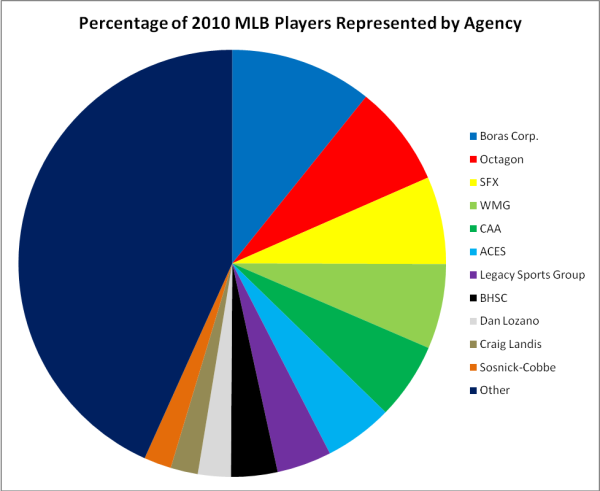 Next, let’s take a look at how many wins on the field last season belonged to each of the agencies with more than five of last year’s major leaguers listed as clients in our records, as measured by our soon-to-be-upgraded implementation of WARP: 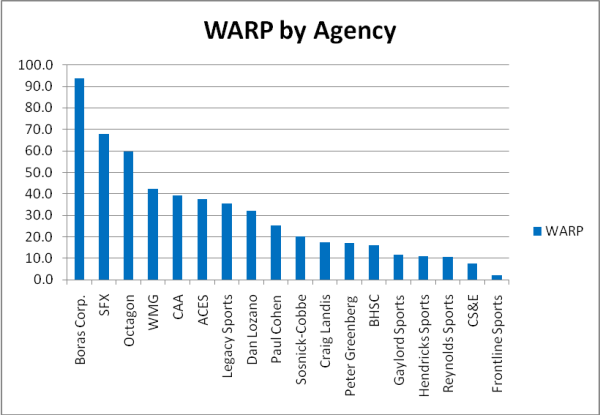 Even according to our incomplete records, Boras Corp. would have little trouble assembling a pair of playoff teams from the talent on its client roster. Finally—and you had to know this line was coming—I’ll show you the money: 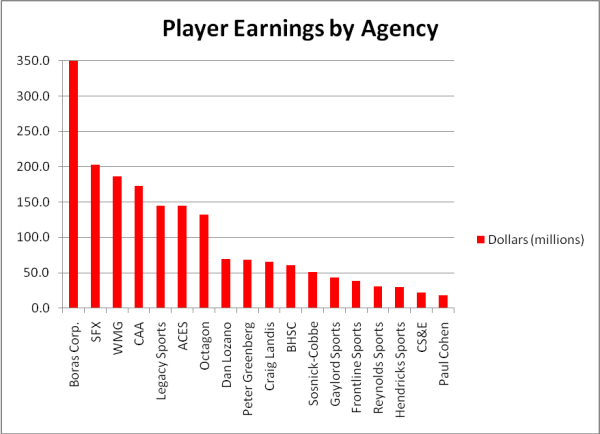 Each of these displays illustrates why Scott Boras has become a household name. It's clear that Boras is doing big business, and easy to sidestep the tired debate over whether he’s good for baseball in order to reach the obvious conclusion that he's good for baseball players. (The next time you’re inclined to criticize his tactics, consider whether you could truly pass up the opportunity to put your financial future in his hands.).

Let’s take a look at the numbers and rosters boasted in our database by some of the mega-agencies above:

The 900-pound gorilla of the baseball agent world, Boras has truly lapped the field, representing 13 players who earned over $10 million each last season alone, according to our records (running all the way up to A-Rod at a whopping $33 million). You have to hand it to the guy who’s extracted $24 million (and counting) from the Mets over the past two years in exchange for Oliver Perez’s -1.8 WARP. (If you thought this was funny at the time, how hilarious is it in retrospect?)

The biggest SFX cash cows in our records were Miguel Cabrera, Alfonso Soriano, and Roy Halladay, with Mariano Rivera, Justin Morneau, and David Ortiz not far behind.

The top 2010 WMG earner according to our database was Carlos Lee, who received a cool $19 million from the Astros in return for a .291 OBP. Lee wasn’t the only WMG client to haunt Houston last season, as Kaz Matsui took home $5.5 million for the trouble of posting a .141/.197/.155 triple-slash line in 78 plate appearances. Jose Guillen also ranks near the top of this delectable list.

Sometimes all it takes to put an agency’s bottom line well into the black is the largesse of New York GMs. Multi-year contracts for Jason Bay and Derek Jeter certainly helped out here, but Ruben Amaro’s generosity will be rewarding CAA client Ryan Howard (and his agent, Casey Close) for years to come.

A little shorter on elite-level talent, ACES owes part of its standing to a smattering of less sensational three-or-four-year deals awarded in recent years to the likes of Chone Figgins, John Buck, Placido Polanco, Joaquin Benoit, and Marlon Byrd. That’s not to take anything away from ACES, since it would be difficult to call a long-term deal for most players of that caliber particularly team-friendly.

John Lackey was the top earner here; after Hiroki Kuroda at $15.4 million, Octagon earners experienced a significant drop-off to Lyle Overbay at $7.95 million.

When Lozano defected from the Beverly Hill Sports Council last year, he took his players with him; as you can see from the third graph above, the Lozano clients included in our database actually outearned those remaining with his former agency, thanks in part to Albert Pujols, who’ll soon make him significantly richer. Joey Votto’s presence in the Lozano lineup ensures plenty of growth potential.

Matt Sosnick and Paul Cobbe, the subjects of License to Deal, also had a fine showing last season on the strength of what was likely to be their last large Dontrelle Willis-related payday. It wouldn’t be fair to judge these agencies on dollars earned per client win without adjusting for service time, but it seems somewhat fitting that the Paul Cohen clients in our records earned less than a million dollars per win last season; Cohen oversaw the team-friendly deal inked by Evan Longoria, for which Andrew Friedman will be thanking him through 2016 (on the other hand, he drove a harder bargain with the recent Troy Tulowitzki extension). It’s also worth mentioning that Jamie Moyer constituted his own agency, since the aged lefty—drawing upon nearly five decades of accumulated wisdom—represented himself.

Once we’ve fine-tuned and presented our data, we’ll be able to offer deeper analysis of all things financial as well as a convenient reference source, so stay tuned for further developments.

Thanks to Jeff Euston and Colin Wyers for research assistance.

You need to be logged in to comment. Login or Subscribe
philly604
The agent affiliations are a nice touch, but a much more important piece of data are service time for all players. That data is at Cots already, but will it too be transitioning to the new player cards?

This is better asked to Jeff, of course, but does the transition of this data to the BP player cards spell the imminent end of Cots? I hope not, unless the additional features there all make it to BP in user friendly form.
Reply to philly604
bornyank1
Service time data will be included on the cards, yes.

As for your second question, that's probably better directed to Jeff.
Reply to bornyank1
jejayhawk
The new cards will include both service-time figures and an agent listing, if available. The data will look much better here than it ever has at Cot's.
Reply to jejayhawk
pmatthews
For anyone inclined to direct vitriol at Boras (or any other agent), it would be helpful to remember that no one ever *forced* a club to sign a contract with one of his clients.

No team is ever coerced into signing a contract with a player it does not want, or with terms it cannot accept.
Reply to pmatthews
Mountainhawk
No one was forced to do business with Madoff, but that does make him any less of a scumbag.
Reply to Mountainhawk
bbienk01
To state the obvious: there's a difference between being a victim of fraud and making a stupid business deal.

So far as I know, nobody has accused Scott Boras of doing anything illegal. The problem seems to be that he's good at his job, which makes people angry.
Reply to bbienk01
pmatthews
So then, Mountainhawk, are you accusing Boras or any of the other top agents of being scumbags? If so, on what basis?

I don't know any of these guys personally, and given that press accounts are prone to not presenting all of the relevant facts, I should think that none of us are in a position to judge the character of any of the top agents.

They seem to be good at their jobs, which is simply representing their clients' interests in business negotiations. That is a valuable skill to have.
Reply to pmatthews
padresprof
I like the new lines of research BP is conducting these days. This one looks rich for exploration. If I were a player, the question I would have is given the fact that I have produced X amount of WARP, or my TAv is Y, which group is going to help me sign the biggest contract possible (which can be defined several ways.) This information tells me that Boras signs big contracts because he represents top players. It does not tell me if I as a player could actually sign for more using a different group. I look forward to future articles.
Reply to padresprof