A bad first impression can be overcome, be it by Austen's Mr. Darcy or MTV's Snooki. (See, I make both high- and low-brow pop culture references. You can relate to me! Unless you haven’t watched The Wire. Then you’re dead to me.) Good ones, well—you never really know if you’ve made a good first impression.

We can try to quantify first impressions, like most everything else having to do with baseball. This being PECOTA week, I got to wondering about the predictive value of a major leaguer’s first plate appearance. When you think about it, there’s probably no more nerve-racking moment in a big leaguer’s career than his first time up. The moment is the culmination of a lifetime of work, and nobody forgets their first time. What can we learn about those who deliver? Are they any better than those who don't? Are they more clutch?

Keep in mind that each of these plate appearances occurs when a batter is facing a pitcher for the first time in the game, which is a known disadvantage to the batter. Furthermore, exactly 1,000 position players debuted as pinch-hitters, another significant penalty. (It’s odd that managers put so many players in a position to fail their first time up.) The pinch-hitters managed only a .239/.291/.311 line.

We don't see drastic divergences based on extremely early returns, which isn't surprising—after all, we're talking about one at-bat here, however significant—but a few differences do crop up. Players who lay one down or take one for the team in their first at-bat seem more likely to do so in the future, but the most significant outcome is the difference in strikeout rate. Indeed, PECOTA projects players who strike out their first time up to strike out in 21% of their plate appearances in the upcoming year, compared to a rate of only 19% for everyone else. I was also interested in finding out whether players who K’ed in their debuts were “clutch” or not. These batters do in fact perform worse in higher-leverage situations according to FanGraphs data, but most batters who strike out often perform worse in high-leverage situations, since such batters have deficiencies that can be more easily exploited by specialized relievers. It must come as a blow to strike out in your first at-bat, but it gets worse: in 108 even more ignominious instances since 1960, a batter made the final out of the game in his first plate appearance.

There are few things on the field more exciting than watching a player hit a home run in his first at-bat. 69 players have pulled off this feat since 1960, four of whose first round-trippers I remember having witnessed on TV: Marcus Thames, Jordan Schafer, Jason Heyward, and Daniel Nava. In the chart below, I label each player who has homered in his first PA over time, with bars representing career home-run totals (click to enlarge):

I also found five examples of a batter walking off in his first plate appearance: Jack Hiatt in 1964, Bob Pate in 1980 (a pinch-hit walk-off walk), Danny Tartabull in 1984, Curt Ford in 1985 (off of Lee Smith), and the most recent occurrence on May 3, 1995, when Tomas Perez entered a tie game in the eighth inning as a pinch-runner for Carlos Delgado. The Jays failed to score that inning and found themselves down a run with nobody on and two outs in the ninth. But Roberto Alomar homered off of Roberto Hernandez to send the game into extras, and in the bottom of the tenth, with two outs and a man on second, Tomas Perez singled home the winning run in his first ever plate appearance.

When we dream about playing in the majors, we don’t really consider the pressure of the fans or the grind of the games. We think about that first time at bat or on the mound. With that in mind, I thought I’d provide as much context surrounding debut appearances as I could find.

On average, 52% of debuts are made at home. The average attendance is 24,000 fans. 25% of debut plate appearances occur in the second inning, and another 25% in the eighth or ninth. These PAs occur in the following distribution of lineup spots: 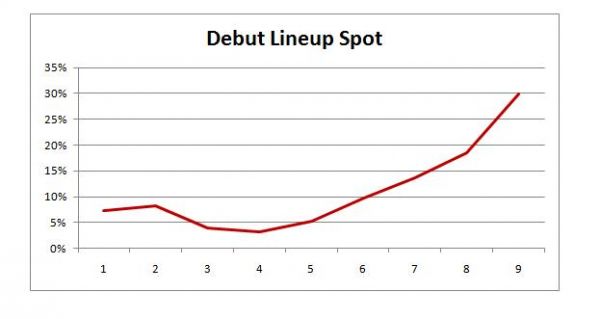 As one would expect, raw rookies receiving their first taste of the majors tend to congregate toward the bottom of the lineup. Batters have the platoon advantage two-thirds of the time in their first plate appearance, and the debuting batter’s team wins 40% of the time. (For debuting pitchers, that figure is only 30%, which suggests that opposing teams aren’t inclined to make newcomers feel at home.)

Every once in a while, a player comes along who's anticipated enough to affect the context of his debut appearance. (If he’s really good, he’ll even have Bob Costas come out to validate the occasion.) The following starting pitchers drew crowds of at least 97% capacity and 1.7 times the average for that home team in that year: 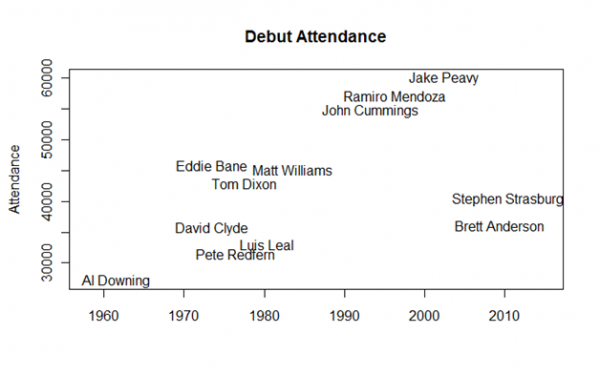 So much for Strasburgmania; who knew John Cummings was such a draw?

And finally, a quick look at debuts by date, dominated by Opening Day and September call-ups: 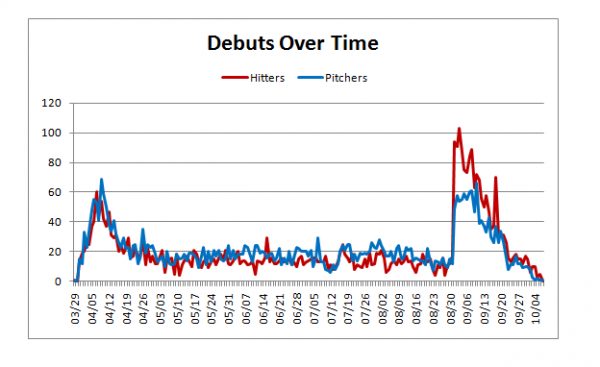 Thanks to Retrosheet for first plate appearance data.

You need to be logged in to comment. Login or Subscribe
joelefkowitz
Enjoyed this. First chart shows Adam Wainwright with nearly 100 career home runs though.
Reply to joelefkowitz
jgreenhouse
Joe, thanks for the catch. The mapping somehow got screwed up when I created the chart. That should've been Napoli. Should be fixed.
Reply to jgreenhouse
lemppi
Good article.....I'm also a big fan of "The Wire". They should make a movie to keep developing the story....I bet they could get enough of the cast back.
Reply to lemppi
lemppi
Jeremy, it would be interesting (to me anyhow!) to know how a player's "cup of coffee" performance typically relates to their career path. I'm thinking in particular about Will Rhymes and Scott Sizemore in Detroit. Rhymes outperformed Sizemore in DET last year....but both were under 200 PA's. Sizemore's minor league track record is more impressive than Rhymes over a longer time. The argument among some segments of Tigers' fans right now is whether to lean on the longer minor league track record to figure out who will do better moving forward, or to rely on the MLB performance as a guide.

Personally, I lean toward Sizemore and I think others do as well...but it would be fun to argue this point with more statistical information on how their samples from last season aren't indicative about what we're most likely to see moving ahead.
Reply to lemppi
jgreenhouse
Yeah, I'm no projections expert, but I'd probably take Sizemore over Rhymes, too (in baseball, not names). There's probably something similar in Houston, too, with Chris Johnson and Brett Wallace.
Reply to jgreenhouse
Agent007
"players who strike out their first time up to strike out in 21% of their plate appearances in the upcoming year, compared to a rate of only 19% for everyone else."

That's a small difference, like one more strikeout in fifty at bats. Sheesh. This appears, to me, to be a totally meaningless and trivial article, about as significant in the scheme of things as the first at bat is to an entire career.
Reply to Agent007
jgreenhouse
I strongly disagree, both with the magnitude of importance between a 19% and 21% K rate and with the study being anywhere near as significant as a player's first at bat to his career.

Think of it this way: a 2% bump in strikeouts is equivalent to a 20-point loss in OBP. That's not trivial. If you're talking about statistical significance, that's different, but at face value, a 2% difference in strikeouts is fairly big.

And every single time I watch a player make his debut, one of the announcers who used to be a ballplayer will reminisce about his first time up. It certainly means a lot to the player.
Reply to jgreenhouse
formersd
I happened to be at Peavy's debut. The Yankees were in town which is a rarity in San Diego, so I suspect the great attendance was due to the impact of the Yankees & their fans than excitement for Peavy.
Reply to formersd
msloftus
Omar may be the greatest TV character ever.
Reply to msloftus
lemppi
McNulty isn't far behind...
Reply to lemppi
shandler
It's all in the game Yo!
Reply to shandler
BrewersTT
This was fun.
I wonder whether opening day, and its opposing ace on the mound, is disproportionally represented among the batters' debuts.
Reply to BrewersTT
atfhoops
A Jim Bullinger mention! May not have led the league in ERA, but always at the top of EAR.
Reply to atfhoops
saint09
Aussie Luke Hughes blasted a dong first AB last year for the Twins... and is now champion of the Perth Heat in the Australian Baseball League. Well done Hughesey!
Reply to saint09