We remain in breathless anticipation for the release of the PECOTA spreadsheets, so let us continue to revel in the odd outliers. On Friday, I looked at relief pitcher rate statistics. These are, by their very nature, subject to a relatively high level of noise. That makes it possible for otherwise very good players, like Carlos Marmol, to put up the equivalent of otherworldly results. But the bullpen is not the only place you can find outliers.

Even on offense, there is the possibility that a single player will run out in front of the curve. And who better to do so than that odd blip in the newspaper headlines (circa 2009), Emilio Bonifacio? Though his feeble bat does not afford him many opportunities to let loose on the base paths, when he does he is more than capable of doing damage. Consider the following plot: 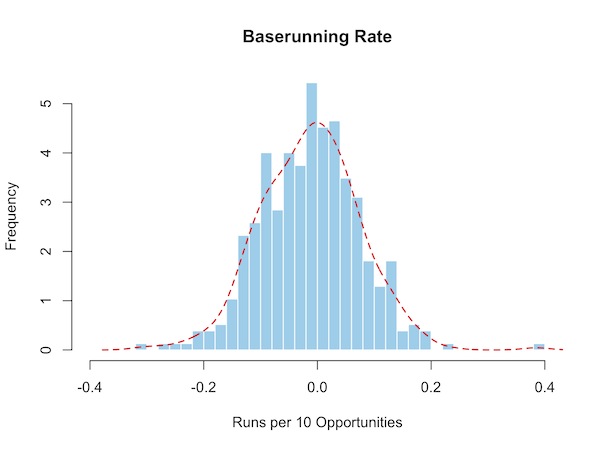 The chart plots a histogram (and overlapping density function) of an ad hoc baserunning stat, calculated as BRR divided by total opportunities (stolen base, air advancement, ground advancement, hit advancement, and other). The point of this stat is to remove, to the degree this is possible, the influence of playing time and on-base skill on evaluations of baserunning talent. Because a player like Bonifacio is miserable at hitting (and therefore didn’t get much playing time last year), it is only once we do this that his truly superlative success as a baserunner becomes apparent.

Again, PECOTA will thumb its nose at such results. In 2009, Bonifacio posted a rate of 0.062 runs per 10 opportunities, which this year would have ranked him 75th in the majors. But in 2010, his 0.385 runs per 10 baserunning opportunities was a full 67% better than his next competitor (the similarly excellent Michael Bourn, about whom more in a moment). So distinctive was Bonifacio’s performance that it was rather difficult to visualize clearly his separation from the pack. Put another way, Bonifacio’s rate was more than four-and-a-half standard deviations above the mean. How about that hustle, folks?

Undoubtedly you’re curious about the counting equivalent, raw BRR. It is here that Michael Bourn’s ability to post an above-average on-base percentage (and the concomitant reward of batting atop the order). In fact, Bourn had the 11th most opportunities (Ichiro Suzuki, Juan Pierre, and Derek Jeter—in that order—were the top three in that category). But as noted above, Bourn also made excellent use of those opportunities. Let’s go to the chart, which tells the story well. 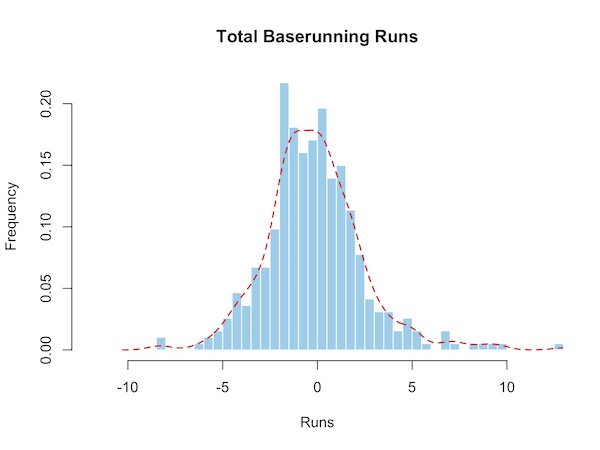 Bourn’s 13 BRR are significantly higher than the runner-up, Juan Pierre (9.6) was able to generate. Moreover, there is reason to expect that Bourn might be atop the list again next year: his 2010 mark was actually down from the 15 runs he added with his legs in 2009 (leading the majors by an even wider margin). PECOTA can do its worst, but it would be wise to consider Bourn’s immaculate record of success in this regard.

And now, for purely informational purposes, I present the top 10 most efficient base runners by (BRR / Opps):

You need to be logged in to comment. Login or Subscribe
BurrRutledge
Good stuff, Tommy. Is the list at the bottom their career BRR/Opps? I'm assuming it's single season based on the text above, but the chart's not clear in that regard. Who would have the best career baserunning rate?
Reply to BurrRutledge
tbsmkdn
It is just for 2010, thanks for clarifying. I'll have to look into the career questionâ€”it's certainly an interesting one.
Reply to tbsmkdn
preams
Just curious about who is the outlier at the bottom of the list.
Reply to preams
tbsmkdn
For the rate version, the big outlier is Nick Hundley (-0.308), with Alex Gordon coming in second to last. For the counting version, it's a virtual tie between Torii Hunter (-8.5) and Adam LaRoche (-8.1). Nick Hundley comes in third there.
Reply to tbsmkdn
preams
Thanks.
Reply to preams