This is a story about the blips on the right-hand side of a kernel density plot. Well, no, that isn’t true, really. It’s a story about Christmas Eve. It’s about the ecstasy of unbridled expectation. Or maybe it’s about Carlos Marmol and Rafael Betancourt.

Laying a Finger Aside One’s Nose

Christmas Day is terrific. It’s unbeatable as far as holidays go. It’s the indulgence of pent-up celebration and desire, preparation, and togetherness. There are cookies, adult beverages, standing rib roasts and candy canes. But have you ever seen a seven year-old in the late afternoon on Christmas? He’s spent, physically exhausted, and—most likely—cranky. Point is, Christmas Day can be a rollercoaster with both ups and downs.

What about Christmas Eve? The day before is all build-up. There’s no tapering off. It’s exponential growth. If Christmas Eve were shares in John Law’s Mississippi Company, Frenchmen would be buying like there was no end in sight. You couldn’t get to sleep fast enough. No, really, you couldn’t, so instead you lay awake thinking about all the toys that might be waiting for you under the tree. That feeling, the one right before you fall asleep on Christmas Eve, that’s the one you want.

On Monday, BP’s PECOTA projections will be released. It will be a day that, for a certain type of baseball fan, will be essentially forfeit for other purposes. Once the spreadsheets are released, the painstaking task of assembling the Palpatine’s Shuttle Lego Star Wars kit just unwrapped begins. Identifiers will have to be cross-referenced, custom columns will be generated, and comparables will be scrutinized.

Dreams of Sugar Plums Dancing in His Head

So as we lie awake straining to hear reindeers on the rooftop—that’s just Colin Wyers tapping away at an Oracle database—let’s enjoy the anticipation. Because what PECOTA will do when it is released is it will ruin everything. That’s right. All the wonderful strangeness of the 2010 season will vanish into thin air, having been neatly regressed to the mean and adjusted for playing time expectations. Bah, humbug.

But until then, let’s go hunting for outliers. Where better to do so than the in the land of the small sample size: the bullpen? Be very, very quiet. Here’s a chart: 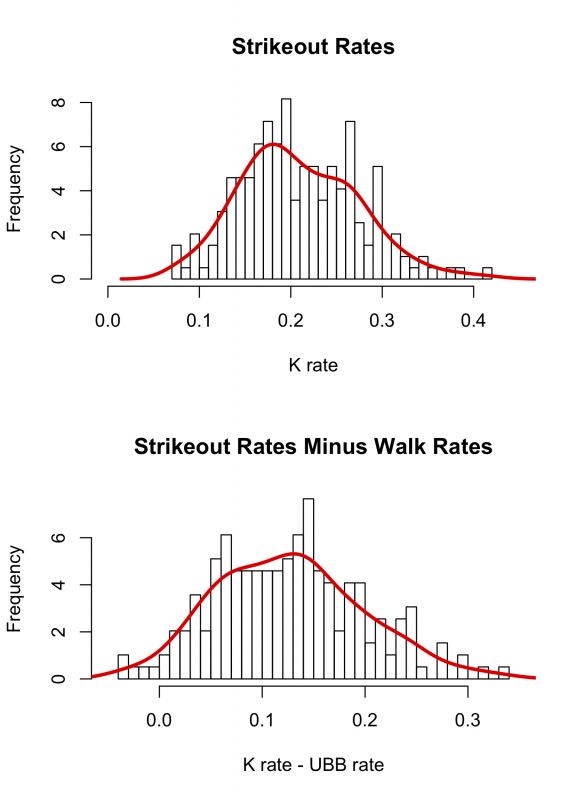 That’s a pair of histograms, each populated by every pitcher used exclusively in relief who faced at least 100 batters last season, from Aaron Heilman to Zach Braddock. (There’s also a smoothed density curve plotted on top to make things a little clearer.) The top chart is pure strikeout rate (K/PA), while the second one is strikeout minus walk rate (K/PA – UBB/PA).

The story the charts tell is more or less what you would expect. Most guys are pretty average, but there are more guys who are slightly worse than average than vice versa, and more truly excellent performances on the right side than there are disastrous ones on the left. Some of that is due to the criteria I used, and most of the rest is due to the criteria that managers used (truly awful relievers often don’t get to 100 PA).

But we tiptoed out from the bedroom with a specific purpose: to peek at the tree and imagine what might lie underneath. There! Notice the miniscule bump on the right side of each plot? Tiny outliers left over like an elf’s hammers, and the only gift that could trump a Red Ryder BB gun: a forty-two-percent strikeout rate.

Say hello to Carlos Marmol. He has a 30.2% career strikeout rate, which is an excellent mark by any standards. As you can see by looking at the chart, simply replicating that mark would have made him well above average last season. But he didn’t do that; he did much better. So much better, in fact, that the next-nearest pitcher (Billy Wagner) was three percentage points behind him. He racked up 138 strikeouts—more than did 33 starters who qualified for the ERA title—in just 77 2/3 IP. That’s quite literally off the charts (take a look above). You see 16.0 K/9 and your brain tells you what you’re seeing is a typo. And you know what? Carlos Marmol’s PECOTA is going to be a sober dose of reality. It’s going to look at his high walk rates and the unsustainability of his strikeout rate and it’s going to dispassionately spit out a good-but-not-great line. In other words, we might get a Game Gear, but it won’t come with the necessary six Double-A batteries needed to operate it.

Take Rafael Betancourt (the Rockies just did). Three seasons ago, he posted a grisly 5.07 ERA combined with the second-lowest strikeout rate of his career. When he headed to Colorado in the middle of 2009, his career looked like it might have been on the downswing, but this Christmas Eve we don’t have to expect coal. Betancourt lapped the field in strikeout minus intentional walk rate: his 89 strikeouts and six unintentional walks in 62 1/3 IP is another head-turner. Sure enough, he’s the blip all the way out on the second chart. He’s so far out, in fact, that as with Marmol there is a gap on the histogram between him and the next guy. (Strangely enough, the next guy is Billy Wagner. Remind me again why he retired?)

It’s a pretty safe bet that neither Marmol nor Betancourt will lead the majors in either of these categories at the end of next season. That’s how large sets of largely random interactions work. PECOTA knows that, but in a “Don’t tell me how long it will take to get to the Neutral Zone down to the nearest second, Lieutenant Lt. Commander Data” kind of way. We know it too, deep in our hearts. But until we have the spreadsheets at our fingertips, we can fall asleep reflecting on what was a terrific crescendo.

You need to be logged in to comment. Login or Subscribe
tbsmkdn
Thanks to the eagle eyes of a reader, I have altered the plot labels to reflect more accurately the values displayed.
Reply to tbsmkdn
bobbygrace
This is a great concept. I'd love to see more of the 2010 outliers, even if the PECOTAs beat them to the press.
Reply to bobbygrace
mhmckay
BTW -- it was Lt. Cmdr. Data, not Lt. Data
Reply to mhmckay
tbsmkdn
Shaka, when the walls fell
Reply to tbsmkdn
PBSteve
A rare solid SF episode of that show (vs. solutions by "Tech tech tech."
Reply to PBSteve
srhoads629
My oh my, this is really some fantastic stuff, Tommy.
Reply to srhoads629
smallflowers
"(Strangely enough, the next guy is Billy Wagner. Remind me again why he retired?)"

We'll remind you as soon as he files his papers!

Reply to smallflowers
saigonsam
As a fantasy owner who has him as a keeper at the minimum, I am praying those papers never arrive.
Reply to saigonsam
rbross
so I was going to do a bunch of work on my two-hour flight tomorrow but I think I just found something else to do...
Reply to rbross
bret59
I was disappointed to see you dropped the "league" column in the spreadsheet. That was useful for sorting in the past.

Any chance of adding that back in the next iteration?
Reply to bret59