Did you hear the one about the relief pitcher at the bar the night before the game? (One?) The guy is putting back his fair share of adult beverages when someone at the bar recognizes him.

“Hey, John,” the patron says, “should you be drinking tonight?”

“No problem, buddy,” the reliever replies. “I’m not pitching tomorrow.”

Relievers are hard-partying bad boys who dye their beards with shoe polish and pump their fists when they successfully withdraw money from an ATM. While the popular picture may have a kernel of truth, it is connected to a widespread view about the usefulness about relievers. For many analysts, relievers—especially free-agent relievers—simply aren’t worth the money their images would lead you to believe they are.

The question of whether relievers as a whole are overpaid relative to talent at other positions is a notoriously difficult one to solve. I’m not sure anyone has the final answer yet. But some relievers are better than others, and some get paid more than others. That means that, at the very least, we can look for relative bargains on the free-agent market for relievers.

In the past, I have used a metric that blends WXRL and SIERA to evaluate relievers from year to year. This approach has the advantage of combining two types of information we have about relievers. WXRL gives us a sense of how much a pitcher contributed to his team’s chances of winning the game; it’s all outcome and no peripherals (adjusted, of course, for lineup and replacement level). SIERA, on the other hand, is nearly the opposite. It tells us how strong a pitcher’s key peripherals were, especially strikeout, walk, and ground-ball rates. SIERA also has the virtue of doing a nice job predicting future ERA. To succeed in both WXRL and SIERA, then, a pitcher must have dominant peripheral stats and perform well in the box score.

What we’ll do, then, is look at how much better than average each reliever—at least 20 relief IP and no more than 20 innings as a starter—is in both WXRL and SIERA. (Technically, I’ve calculated z-scores.) The scores are combined and compiled into a single list. A deficit in one can be overcome by superb performance in the other, but the very best firemen top both lists. For example, here are the top 10 from 2010:

Nothing gets your spreadsheet pumping like a 16.0 K/9, as Marmol had. Although he was outdone in WXRL by five others (Soria, Wilson, Bell, Soriano, and Brandon Lyon) and in SIERA by six others (Betancourt, Benoit, Billy Wagner, Craig Kimbrell, Joe Thatcher, and Koji Uehara), he experienced combined success in both categories more than anyone else. None of the other names in the top 10 are terribly surprising: each pitcher has had successful seasons in the past.

However, as the experiences of the pair of former Tampa Bay relievers at eighth and ninth disclose, near identical performance in this metric does not guarantee equal success on the free-agent market.

Now let’s turn our stat to the free-agent relievers. There were 29 relievers who both pitched in 2010 and have been given contracts of at least $1 million (per year) this offseason. They range from Mariano Rivera’s two-year, $30 million contract to George Sherrill’s one-year, $1.2 million handout from the Braves. The following chart lists the free agents by the average amount they’ll be paid per year over the life of their new contracts. It also lists where they ranked on the SIERA/WXRL hybrid list.

The chart discloses that reliever pay at least loosely tracks previous-year performance, but it doesn’t do so exactly. For example, Takashi Saito stands out as a bargain: his WXRL of 2.0 and his SIERA of 2.48 were both well above average, and yet the Brewers owe him just $1.75 million. Part of the reason is that Saito is entering his age-41 season and is coming off a season in which he battled shoulder injuries.

Koji Uehara, on whom the closer mantle has only just begun to rest, also looks like a bargain. He had a SIERA of 2.04 and a WXRL of 1.99, which was good enough for 15th overall. This isn’t an example of hidden value, either. Even Uehara’s baseball card would disclose the fact that he allowed just five walks in 44 innings last year, his first in relief. Uehara will head back to the Orioles at a salary ($3 million) lower than what he earned in 2010 ($5 million).

On the other side of the ledger, Bobby Jenks and Brian Fuentes both look overpaid (by the Red Sox and Athletics, respectively). Although each did manage a slightly above average season last year, neither was among baseball’s 50 best relievers. Both pitchers received multi-year deals. Kevin Gregg, meanwhile, did not reach even the modest heights of statistical averageness, but the Orioles have guaranteed him a cool $10 million over the next two years.

As a final point, it may be useful to plot these data points in a scatter fashion. 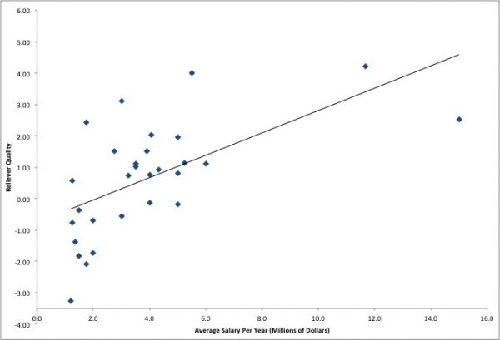 Above the trend line is the better place to be, at least from a team’s standpoint. The four that stick out from the rest are, from left to right, are Saito, Uehara, Benoit, and Soriano. As the chart makes clear, teams do not base their decisions on anything so rigid as this formula. In some cases, like to take into account age and injury risk, this is appropriate. In other cases, it appears to be a much more simple mistake. However much we may want to defend the rationality of hard-working and intelligent front offices, some of these salaries just don’t line up.

You need to be logged in to comment. Login or Subscribe
BBBill
It would be very interesting to see the same type of plot comparing Average Salaries per Year to Saves, to see if that variable shows a stronger correlation. This might prove indicative of the mindset of GMs as they shop for relievers.
Reply to BBBill
nateetan
The trend line is extremely warped by the Yankees' signings.
Reply to nateetan
rawagman
Not really. The trend would still be similar, but it would be a far shorter line!
Reply to rawagman
LynchMob
Would be interesting to see ... I'm guess that rather than a shorter line, the scale of the x-axis would change :-) ... still would be interesting to see.
Reply to LynchMob
tbsmkdn
Sounds like a reasonable request to me!

1) I think with relievers, you see teams paying a significant premium for perceived reliability.
2) I think SIERA gives teams too much credit in their assessment of reliever ability. It seems to me that teams pay more attention to ERA and assume a significant correlation between ERA and leverage. That is, if a reliever has an ERA higher than his SIERA (FIP, etc), it is generally assumed that he struggles with high leverage situations.

Combine these and you wind up with the relievers who put up a low era over multiple years in higher leverage situations getting the big bucks. Teams are adding in a variable which has a geometric multiplier effect.
Reply to TheRedsMan