The Cradle of Torpedo Boats

San Pedro de Macorís is a Dominican city roughly the size of Akron, Ohio. It’s a modest but charming port city in the southeast corner of Hispaniola. It is also, on a per capita basis, one of the most productive cities in generating baseball talent in the world. According to Baseball-Reference, 81 major-league baseball players have been born in San Pedro, including Sammy Sosa, Robinson Cano, and Alfonso Soriano.

Despite the town’s unique baseball heritage, success has by and large eluded the local nine. This year, the Estrellas Orientales—the Dominican winter-league team that calls San Pedro home—celebrates its 100th anniversary. This makes the team only a few decades younger than the town itself. In those 100 years, the Estrellas have won only two championships: in 1954 and 1968 (the DWL championship has only been in existence since 1951). Consider that there are only six Dominican winter-league teams. In a league with only six teams, to fail to win for the lifetimes of most of your adult fan base is to inflict a pain that perhaps only Cubs fans can appreciate.

Later today, the Estrellas will open a best-of-nine championship series against the Toros del Este, the team from La Romana, who last won the championship in 1995 (when Art Howe was the skipper). Notably absent from this year’s finale are either of the two teams from the Dominican capital of Santo Domingo. The more successful of the two, the Tigres del Licey, have appeared in seven of the last nine championships and are typically the most star-studded of the DWL teams, but not this time around. Neither the Toros nor the Estrellas have appeared in the championship series since 2000.

The approach to Estadio Tetelo Vargas—home of the Estrellas—is modest even by US minor-league standards. The stadium, which had to be rehabilitated prior to the 2010–11 season, seats only 8,000 fans and has no outfield bleachers. Saturday’s playoff game against the league’s first-place team, the Toros, would not even fill all of those seats. Even so, there was a buzz of activity in the small parking lot in front of the stadium an hour before the game. Scalpers sold tickets at face value, merchants sold hats, and a father rode up to the stadium entrance with his three sons on the back of his motorcycle.

Inside the concourse, a table was covered with small- and medium-sized bottles of liquor—mostly rum. Beer, or rather Presidente, was sold in cans for $50 Dominican pesos, or about $1.35 American. The seating area was slowly criss-crossed by vendors selling cheese on a toothpick and popcorn from a big tub. One seller of candy and chips had slapped a green-and-white bumper sticker on his caddy that read, “Soy Estrellista, y?!”

Roughly translated, “Soy Estrellista, y?!” means, “I’m an Estrellas fan, so what?” It’s about here that you realize the Cubs analogy won’t really hold much water, even if it has been 42 years since the last championship. Estrellas fans are loud, proud, and excited for an occasion to party. By the fifth inning or so, it is possible to identify at least a half-dozen different types of noisemakers (eat your hearts out, vuvuzelas). There is, of course, the neon-colored, horn-shaped one, but there are also the cylinder-shaped navy one, and the round, pink one. At the top of the seating on the first-base side, there is a seriously impressive drum line accompanied by a trumpet. In the bleachers—by universal mandate the most raucous section of every ballpark in the world—a man runs amok with several large palm branches in each hand. Between innings, cheerleaders in chartreuse tops and fishnet stockings dance to reggaeton on the home team’s dugout.

There are many things about Dominican baseball that are familiar to American fans who frequent minor-league stadiums. The uniforms are similar, the field dimensions are similar (335-385-335), and every once in a while, Paul McAnulty shows up. The differences are largely superficial. There’s a prayer before the game begins, and there’s no seventh-inning stretch.

With the pre-game rituals observed, L.J. Gagnier delivered the first pitch for the Estrellas. Immediately, Jose Constanza and Eduardo Nunez reached base to bring up Andy Dirks for the Toros. Dirks is one of those guys who’s sorta/maybe/on a good day still a prospect, and he hit a warning-track ball into the right-field power alley. Right about here is where Estrellas fans remember they’ve forgotten something. Did they leave the gas on? Turn off the curling iron? Oh, no, you know what? Buck Coats is the right fielder. The Dirks fly ball went in and out of his glove, and just like that the bases were loaded.

As it was then only the top of the first inning, many Estrellas fans were still making their way to their seats as Kevin Barker came up with ducks on the pond and no outs. Barker may never have panned out as the prospect the Brewers hoped he would when they drafted him in the third round of the 1996 draft, but his 260 minor-league home runs attest to the fact that he can give an 86 mph fastball a ride. The small sea of orange representing the Toros fans went wild and the score was 4-0.

With that unhappy beginning, the Estrellas fans were disappointed but still in good spirits. When Coats dropped yet another easy fly ball later in the inning, they tempered their annoyance with supportive cheers; Philadelphia this ain’t.

Eugenio Velez led off the bottom of the first for the Estrellas. He rapped a single up the middle to bring up Pablo Ozuna. Down 4-0 in the first inning with no outs, Ozuna did like all good light-hitting batters in the two-hole do, and squared around to bunt. Granted, Ozuna has a career .282/.318/.359 major-league batting line, but this was a puzzling move. The bunt was ostensibly a success, but the Estrellas failed to score in the inning. (Later in the game, the Estrellas would fail to execute a woefully conceived squeeze play with runners on the corners.)

From there out, the game was not one the home team was destined to win. By around the fifth inning, the seats were mostly full, the fans were into it, and the noise was louder than that at most major-league stadiums. It felt not unlike sitting in the outfield at Shea when Pedro Martinez was pitching. It was odd to see that level of enthusiasm matched with the team’s lackluster performance.

The strangest aspect of the evening was the game’s ultimate resolution. With two outs in the bottom of the ninth, with the home team trailing 8-2 and the ubiquitous McAnulty set to bat, the umpires gathered at home plate. They gestured for the two managers to join them, and then they unceremoniously walked off the field. Only after several minutes of everyone milling around did it become clear that the game had ended with one out still to play because home fans had—for a third time that evening—thrown objects including rocks and plastic bottles onto the field. That was all, folks, head on home. 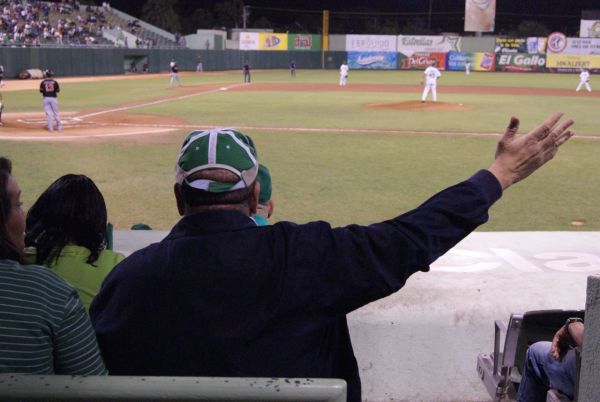 Knowledgeable fans in any ballpark know how to throw up their hands in disgust at a defensive miscue or a disappointing letdown. But for the Estrellas, consecutive victories on Sunday and Monday secured them a spot in the best-of-nine championship against Saturday night’s opponents, the Toros. As the Estrellas Orientales play for the Dominican title, they hope to exorcise their history’s demons and give their fans a reason to celebrate.

You need to be logged in to comment. Login or Subscribe
Richie
On a per capita basis, isn't San Pedro far and away the MOST!! baseball talent generating city? Who's in competition with it?
Reply to Richie