Rafael Soriano has a reputation as a power arm out of the bullpen. For example, Bob Klapisch recently remarked about pairing Soriano’s “power fastballs” with Mariano Rivera’s “historic cutters.” However, as we'll soon see, the repertoires of the two pitchers actually have much in common.

The Seattle Mariners signed Soriano in 1996 as a 16-year-old outfielder out of the Dominican Republic. After he put up a .220 batting average without a home run in two seasons in A-ball, the Mariners converted him to pitching for the 1999 season. The switch paid off quickly, with Soriano striking out a batter per inning in the minors and ascending to the majors by 2002. He began his career on the mound as a starting pitcher with the Mariners, but quickly found his way to the bullpen in 2003, where he posted a dominating season in a middle-relief role.

Then Soriano missed most of the 2004 and 2005 seasons with an elbow injury that required Tommy John surgery. He returned with a good season in 2006, serving as the set-up man for J.J. Putz. Prior to the 2007 season, he was traded to Atlanta in exchange for Horacio Ramirez. Soriano again served as a set-up man, up until the Braves released Bob Wickman toward the end of the year. From there on out, he ascended to the closer role, but his 2008 season was hampered with time missed due to another elbow injury, this one eventually requiring ulnar nerve transposition surgery.

After a solid 2009 campaign in which he recorded 27 saves and struck out 102 opponents in 75 innings, the Braves expected to let Soriano depart to free agency. Instead, he surprised them by accepting their arbitration offer, which had been tendered in hopes of garnering draft-pick compensation. Scrambling to avoid the unanticipated expense, the Braves promptly traded him to the Tampa Bay Rays for Jesse Chavez. There, he collected a league-leading 45 saves in 2010, along with a 1.73 ERA, his best mark since 2003.

Soriano was once again a free agent this offseason, and with the Rays cutting payroll, he found a new home with the Yankees, to serve as Rivera’s set-up man in a climb back down from his success as a closer. Now that he's headed for the Bronx, how does Soriano’s stuff actually compare to Rivera’s? It turns out that both of them throw a cutter. The cut fastball is a popular complementary weapon in the arsenal of many pitchers, but few use it as their main weapon. Only a handful of closers feature a cutting fastball as their primary pitch: Rivera, Joakim Soria, Francisco Rodriguez, and Brandon Lyon. There could be more to add to that list, as Evan Meek would join their ranks if he wins the closer role in Pittsburgh, and Andrew Bailey of Oakland throws a four-seam fastball with some cutting movement, as well as a more classic cutter that’s slightly slower and features even more cutting action.

With Soriano now in the fold, the Yankees’ trio of late-inning relievers, including David Robertson, all rely on a cutting fastball as their main pitch. The Yankees are unique in this regard; no other bullpen features both a set-up man and a closer reliant on the cutter, let alone three men flinging multitudes of cutters across innings seven, eight, and nine.

Let’s take a more detailed look at what Soriano throws: 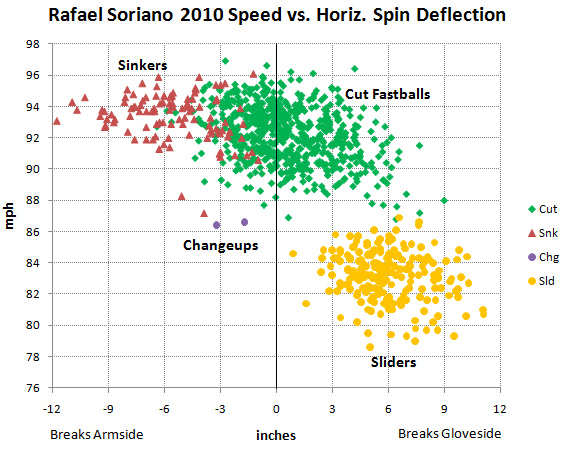 Soriano threw four types of pitches in 2010: a 92 mph fastball with cutting action, a 93 mph sinking fastball, an 83 mph slider, and an occasional 86 mph changeup.

How does Soriano’s stuff fit in the back end of the Yankees’ bullpen? The following graph shows the movement of the pitches thrown by Robertson, Soriano, and Rivera in 2010: 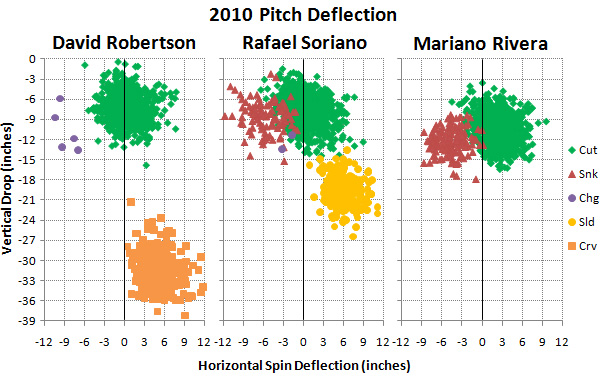 A typical pitcher’s four-seam fastball has about five inches of arm-side spin deflection. Robertson and Soriano’s fastballs, by contrast, had on average almost no horizontal spin deflection, and Rivera typically got a couple of inches of glove-side movement. Rivera’s sinker dropped a bit more than Soriano’s. Robertson spun a curveball and Soriano a slider. Speed-wise, Robertson’s cutter averaged 92 mph, Soriano’s 92 mph, and Rivera’s 91 mph. It’s hardly the case of Soriano offering a power four-seam fastball in contrast to Rivera’s cutting movement. Rather, he should feel right at home with his late-inning bullpen mates.

Next, let’s examine Soriano’s approach with each of his pitch types. The following strike-zone location charts are shown from the perspective of the catcher, and the location of a pitch is indicated where it crossed the front of home plate: 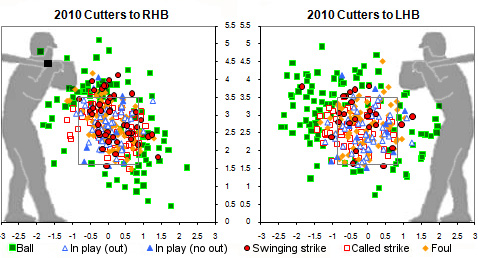 Soriano threw his cutting fastball 67 percent of the time to both right-handed and left-handed batters. In 2009, he had a distinct four-seam fastball at 93 mph and a cut fastball at 91 mph, both of which he preferred to toss to right-handed batters, but in 2010 he merged the two pitches into one and used it as his mainstay to opponents on both sides of the plate.

He mostly threw the cutter over the plate to righties and kept it away from lefties. He had a good whiff rate all through the zone against right-handers (24 percent of swings), and at the top of the zone against left-handers (only 16 percent of swings). Opponents had terrible luck when they put the cutter into play, batting only .212 on 113 batted balls, including just three home runs and a miserable .191 BABIP. The balls hit off the cutter mostly went into the air—only 21 percent were ground balls—but another 21 percent were infield flies, which helped Soriano’s cause greatly. 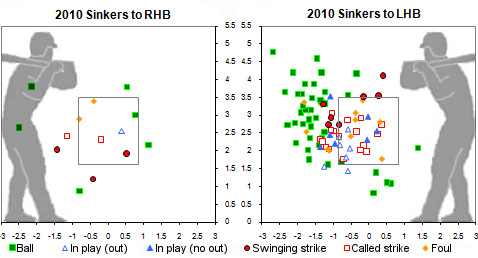 His sinking fastball was mostly reserved for opposite-handed batters, to whom he threw it 20 percent of the time. He kept the sinker away and often out of the strike zone, with 46 percent resulting in balls. He often used this pitch to start an at-bat, throwing a sinker as the first pitch to a lefty over a third of the time.

His sinker was, unsurprisingly, a better ground-ball pitch than his cutter. Six of 15 sinkers in play were hit on the ground in 2010, and none made it over the fence.

He cut his sinker usage in half from 2009, perhaps because of poor results on balls in play. He allowed 13 hits on 32 sinkers in play in 2009, good for a .406 average. It’s no wonder he decided to cut back on the sinker in favor of the cutter in 2010, even if poor luck played a role in those results. 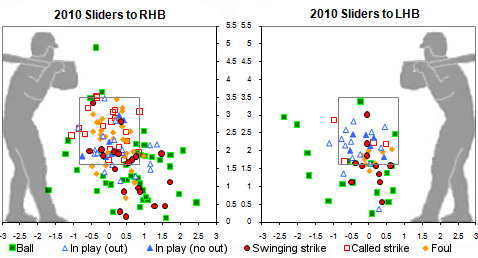 The slider was a better ground-ball generator than his sinker, resulting in 54 percent of batted balls on the ground in 2010. Batters managed only 11 hits on 34 sliders in play (a .229 average), but three of those went for home runs.

Soriano appears to have tuned his repertoire in 2010 to optimize his results on balls in play. However, no reason for the greatly increased infield fly rate in 2010 was evident in the data other than his reduced usage of the sinker, which was not a pop-up generating pitch. Though most of the popups were generated when he pitched up in the zone, he pitched up in the zone at very similar rates in 2009 and 2010. Thus, some regression toward league average can be expected in 2011 both in the rate of infield flies and in BABIP.

Soriano’s cutting fastball and slider are both above-average pitches that he can throw for strikes and use to get whiffs. His sinker is a weaker weapon, used mostly as a first pitch to lefties. If he can avoid the elbow troubles that have resulted in two surgeries, he projects as an outstanding set-up man in a strong bullpen and a worthy successor in the closer role should Rivera choose to hang up his spikes in the next three years.

Special thanks go to Sportvision and Major League Baseball Advanced Media for collecting and making freely available the detailed pitch data used this article. Pitch classifications were supplied by the author.

You need to be logged in to comment. Login or Subscribe
sam19041
Can we see more closers in that chart (Fastball Speed vs. Horizontal Deflection)? Where is John Axford, the mustachioed one?
Reply to sam19041
mikefast
Axford is at 94.9 mph and -3.1 inches horizontal spin deflection.

I created a zoomed-in image of the portion of the graph where the right-handed pitchers were too densely packed to place names on the full chart:
http://www.baseballprospectus.com/u/images/closers_speed_vs_horiz_spin_deflection_zoom.jpg
Reply to mikefast
mikefast
Btw, of the pitchers shown on the zoomed chart, I consider that Meek, Soria, Rodriguez, and Dotel throw cutters as their primary pitch (Bailey also, with the caveat listed in the article).

Bell, Betancourt, Clippard, Rauch, Broxton, Axford, and Storen throw normal four-seam fastballs but get minimal arm-side movement because their arm angles are close to being over the top.
Reply to mikefast