This post presents similar data for the pitchers on the roster of one particular team, in this case, the Philadelphia Phillies, along with some brief commentary.

For an explanation of the methodology, please refer to the original article linked above. Mostly this is a data dump. I'd be curious to get feedback on whether people find this information interesting or if they would prefer that I spend my time on something with more narrative and analysis.

Roy Halladay has had a very consistent fastball release point from game to game, although he did raise his arm angle a little bit toward the end of 2008 and dropped it back down slightly in the middle of 2010. 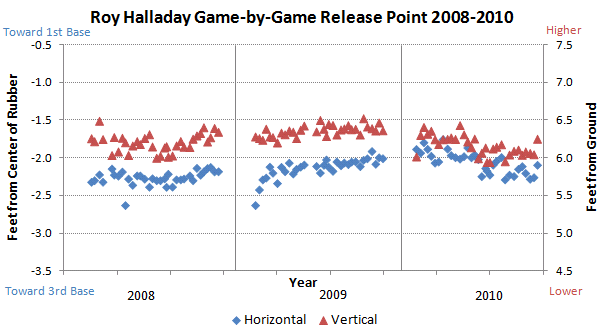 It looks like Cliff Lee moved over toward third base on the pitching rubber in his last start of 2009; otherwise, his release point has been very consistent. 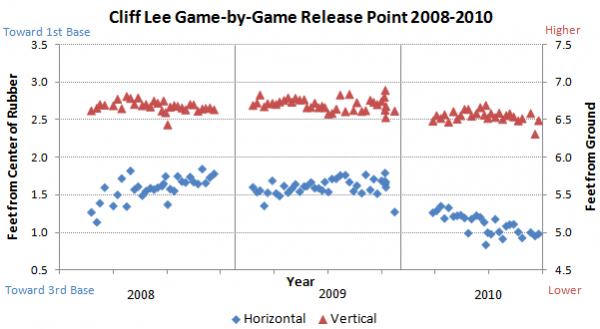 You can see here that Roy Oswalt is shorter than Halladay and Lee, resulting in a lower release point, and he also stands over toward the first-base edge of the pitching rubber. He shifted even farther toward first base for the 2010 season. 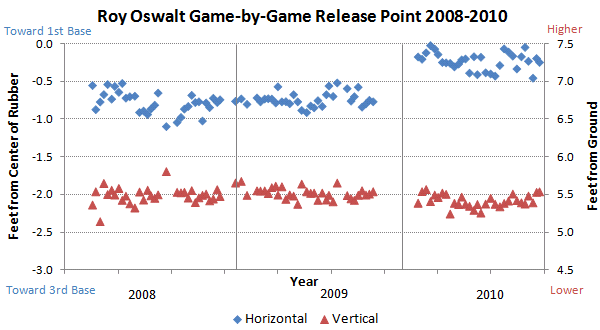 Cole Hamels was discussed in the original article, including his shift toward first base during 2010. His game-to-game consistency has been about average. 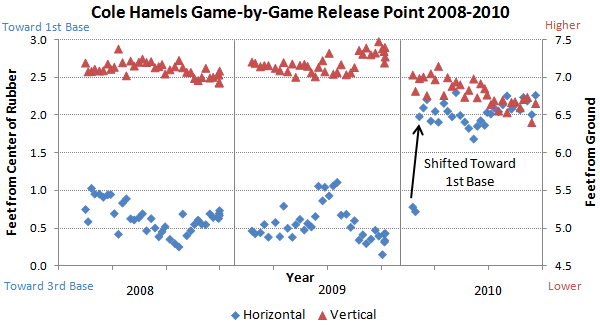 Joe Blanton appears to have gradually raised his arm angle and moved toward third base on the rubber. His game-to-game consistency has been good. 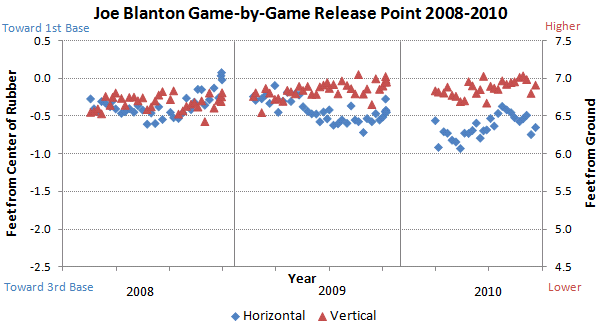 Jamie Moyer may never pitch for the Phillies again, but it's interesting to see that he was making adjustments even in his 24th season in the majors. He dropped his arm angle quite dramatically to begin the 2010 season. His game-to-game consistency was about average. 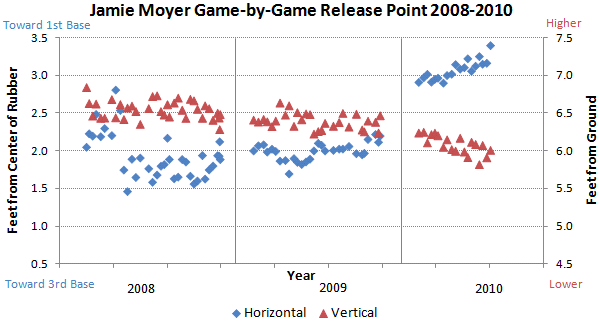 Brad Lidge had poor fastball release point consistency. He also raised his arm angle dramatically to begin 2010, but he dropped it back toward his previous arm angle by midseason. 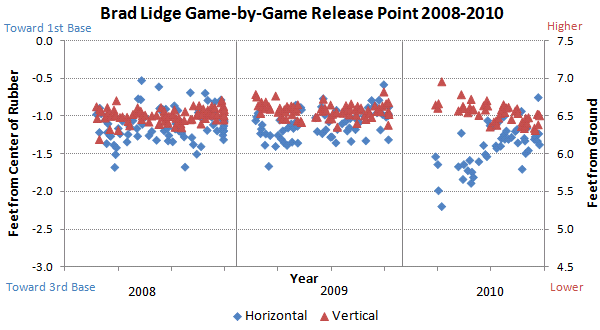 Ryan Madson raised his arm angle somewhat when he returned from his broken toe in July 2010. His game-to-game release consistency was about average. 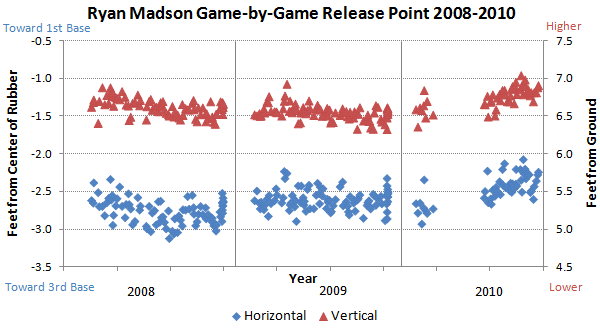 This method does not work well for Jose Contreras, but here is his data in this format, anyway, for what it's worth. Contreras purposefully changes his arm angle, dropping down against right-handed batters. Thus, his average release point for a given game is mainly dependent on the mix of lefty and righty batters that he faced. 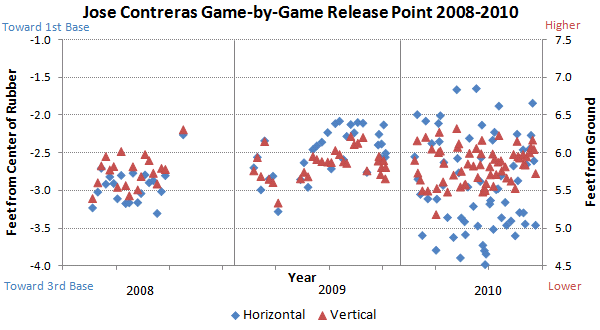 Danys Baez has had average release point consistency on his fastball. 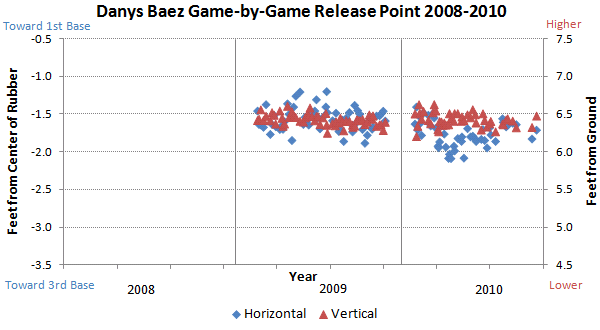 J.C. Romero has had poor release point consistency on his fastball. 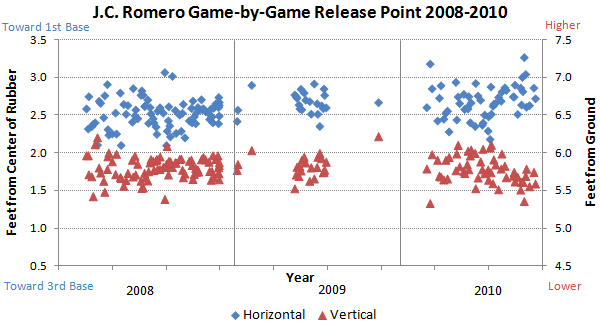 Some of the remaining Phillies bullpen candidates are presented without comment, including Brian Bass, Antonio Bastardo, Eddie Bonine, David Herndon, and Kyle Kendrick. 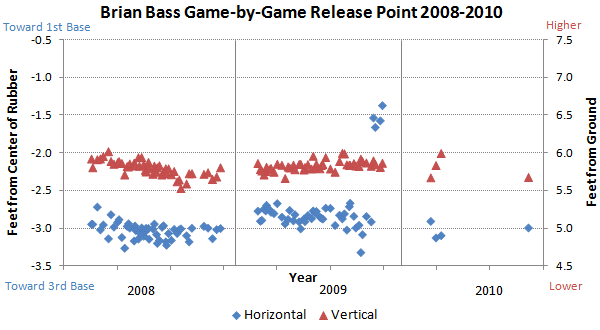 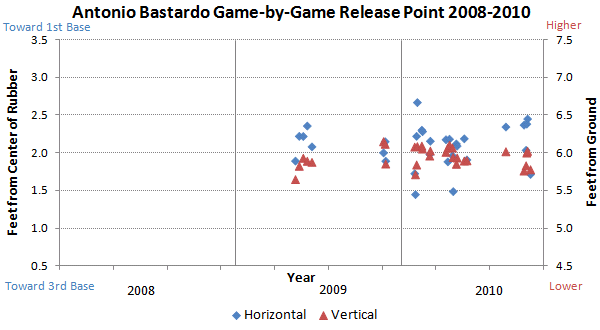 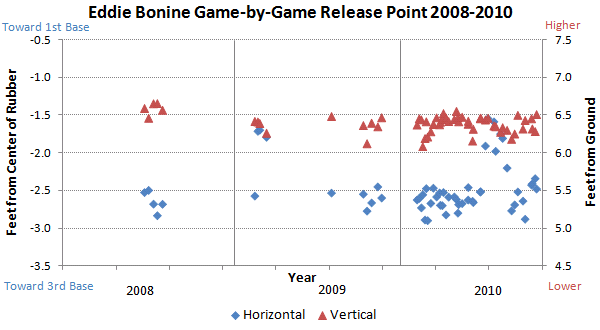 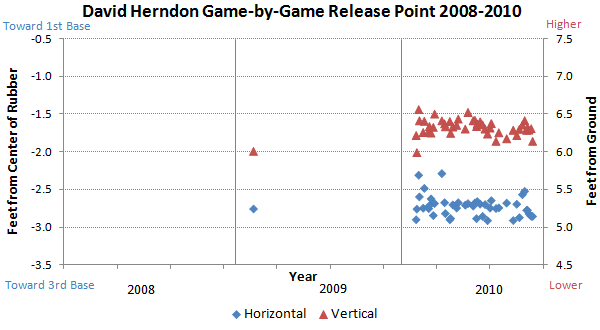 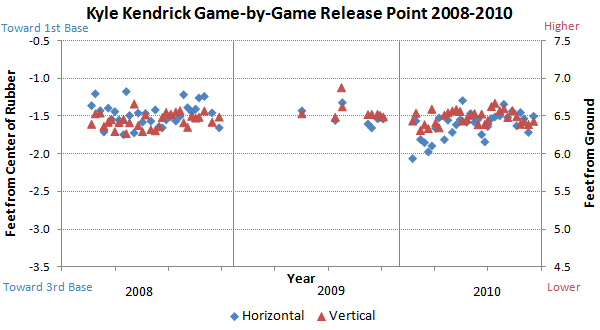 You need to be logged in to comment. Login or Subscribe
jlwelker
Definitely found the info interesting...though it might only be because I'm a phillie fan. Thanks!
Reply to jlwelker
EddietheMVP
As someone who struggled trying to find that consistency in college (never did, lol), this is VERY cool stuff! Trend for Halladay might reflect him trying to conserve himself for the playoff run maybe. Wasn't aware of the moves Hamels and Oswalt made this season. Maybe Oswalt did it to help control a cutter? Hmm. Doesn't hurt that I'm also a Phillies fan.
Reply to EddietheMVP