I recently wrote an article for ESPN Insider about Andy Pettitte's potential role in firming up the Yankee rotation in their competition for the American League East title in 2011.  The Baseball Prospectus version of the article is here.  There was some material on Pettitte's pitching repertoire that didn't have room in that article, but I thought it might be of interest to readers, so I'm publishing it separately here.

Pettitte throws five pitch types: a four-seam fastball, sinker, slider, changeup, and curveball.  The following charts show where each of Pettitte’s pitches in 2010 crossed the front of home plate, from the catcher’s viewpoint, along with the result of each pitch. 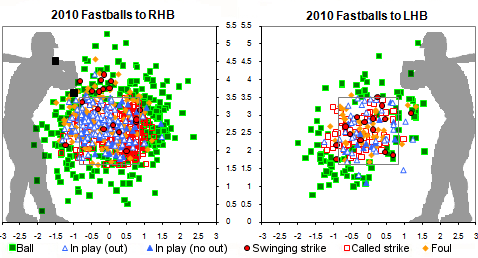 Pettitte’s four-seam fastball averaged 89 mph in 2010, and he got some cutting action on the pitch.  You can see an example of his four-seam fastball grip here.  The four-seamer was his mainstay, thrown 46 percent of the time.  He kept it away from lefties and worked both sides of the plate to righties, though he more often kept it inside to them.  His four-seam fastball was a fairly average pitch, but he was outstanding at avoiding the home run off the four-seamer all year, allowing only one.  That was to Alex Gonzalez on June 5, a shot that tied a game the Yankees eventually lost to the Blue Jays in 14 innings. 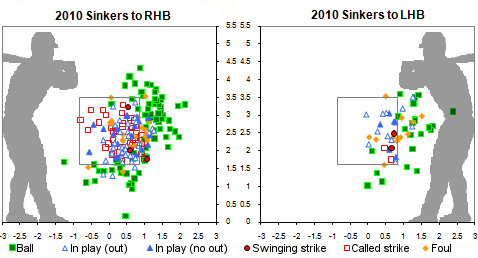 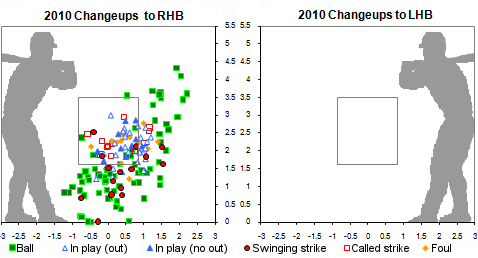 He used a circle changeup that was clocked at 80 mph and dropped a foot more than his fastball.  It’s typical for pitchers to use the changeup against opposite-handed hitters and to spot the pitch away so that it moves off the plate and away from the sweet spot of the bat.  Pettitte did just that, using the pitch exclusively against right-handed batters nine percent of the time.  He had trouble keeping the pitch in the zone, missing low or away almost half the time.  His whiff rate on the pitch was below average; batters missed his changeup with 22 percent of their swings, compared to league average of 31 percent on the changeup.  His changeup grip can be seen here. 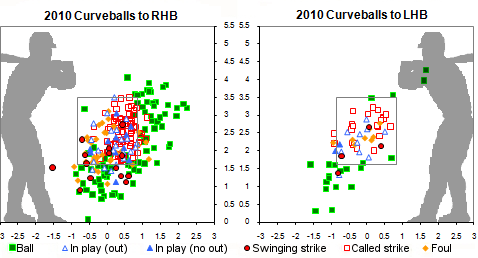 His curveball was thrown 75 mph with good movement, eight inches laterally to the glove side with an average drop of 29 inches.  You can see Pettitte’s curveball grip here.  He threw the curve 14 percent of the time.  He displayed good control of the pitch, throwing 67 percent for strikes versus league average of 57 percent.  Batters swung at only 34 percent of his curves, watching them spin in for called strikes a third of the time. 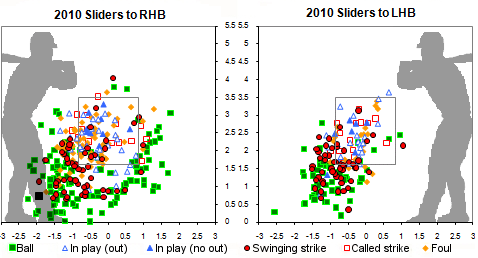 Pettitte’s slider was his best pitch.  He threw it at an average speed of 83 mph with good drop and glove-side movement, and you can see his slider grip here.  This pitch is often referred to popularly as his cutter.  This article refers to the pitch as a slider because the six-mph separation from his fastball and the 20-inch drop are similar to sliders thrown by other pitchers.  He favored the slider against left-handed batters, using it 31 percent of the time, as opposed to 18 percent of the time to right-handed batters.

Pettitte placed the slider down and in to righties and had fairly good success at getting them to swing and miss.  He also occasionally targeted the outside corner, usually for a ball.  He displayed an amazing ability to hit the corner low and away to lefties.  As a result, lefthanders whiffed on a lot of sliders that would not have been strikes. 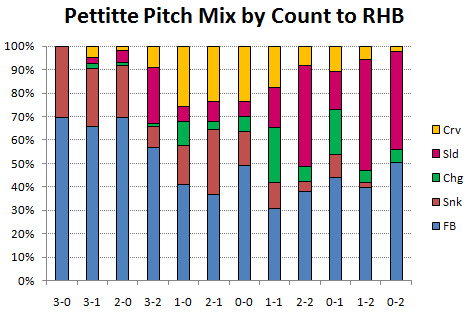 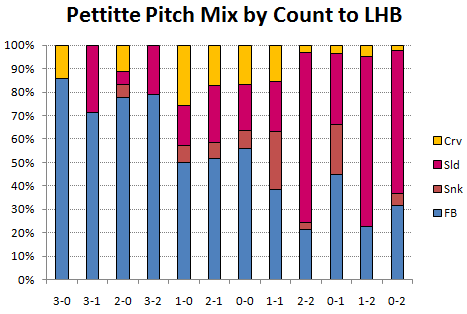 Pettitte used his curveball early in the count, 21 percent of the time with no strikes.  He used his slider as his strikeout pitch, throwing it 62 percent of the time to lefties with two strikes and 41 percent to righties.  In three-ball counts he turned heavily to his four-seam fastball, as most pitchers do.

That's a quick retrospective on Pettitte's pitch use in 2010.  It will be interesting to see if he returns to pitch for the Yankees in 2011.

You need to be logged in to comment. Login or Subscribe
jamin67038
I love this- very well done.
Reply to jamin67038
BillJohnson
Seconded. Incidentally, I assume the black squares are HBPs, fittingly enough?...
Reply to BillJohnson
mikefast
Thanks. Yes, those are the HBPs.
Reply to mikefast