Welcome to the second and final part of To Play or Not to Play. As you may recall, last week we took a look at some free-agent pitchers who have been mulling retirement as the 2011 season draws nearer. Today, we’ll be taking a look at a few team-less hitters who find themselves in similar potential retirement situations. By looking at these batters’ performances from seasons past, we’ll aim to give some well-informed advice on whether they should stay in the game.

Having seemingly threatened retirement on a yearly basis since his time in Boston, Ramirez is no stranger to this type of speculation. Of course, now that he’s 38 and coming off an injury-riddled season, any hints or whispers about Ramirez hanging up his spikes may now be considered legitimate. With that in mind, let’s take a look at what the Dreaded One was able to accomplish in 2010:

By his standards, Ramirez had a mediocre performance. The Dominican batsman posted an .870 OPS, his lowest showing since his rookie year. Still, even with such a low OPS, Man-Ram did have a .319 True Average, which was good for 15th-best in the major leagues for players with at least 320 plate appearances. Needless to say, Ramirez was an asset with the bat, despite what the jeers from Dodgertown may indicate.

One of the main problems for Ramirez last season was his propensity to hit the ball on the ground. Ramirez’s worm-killing bloodlust was his worst since 2002, as he hit grounders at a 43 percent rate, a five percent increase over his career average. To make matters worse, this increase in GB% also came with a decreased percentage of line drives. Below is a graph of the dramatic change in Ramirez’s batted-ball tendencies over the last few seasons: 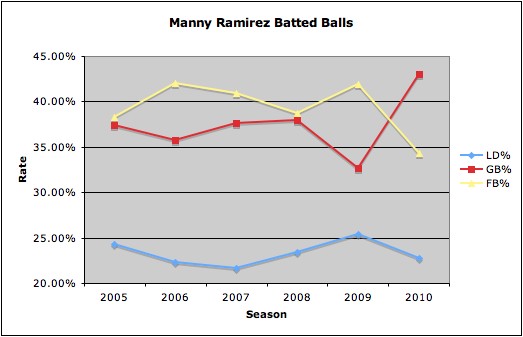 As we can see, Ramirez’s batted-ball trends all traveled in the opposite direction that you would want in 2010. Luckily, despite its negative trajectory, Ramirez posted a line-drive rate identical to his career average. Other than that, however, Ramirez was not hitting the ball way we are all used to seeing. Along with the out-of-line fly-ball and ground-ball tendencies, Ramirez was also dealing with a decreased rate of home runs per fly ball. In fact, Ramirez’s 12.7 percent HR/FB rate was the lowest ratio he’s posted since the 2007 season, which, oddly enough, was also a time many folks in the industry were questioning his ability at the plate.

Something that could have affected Ramirez’s power numbers was the numerous issues he had with his right leg, specifically his hamstring and calf muscles. According to the Los Angeles Daily News, Ramirez felt like he was in spring training after missing two months with the Dodgers. While I usually feel like we should all take anything Ramirez says with a large grain of Manny-Being-Manny brand salt, it does seem like there could be something to that statement. From the beginning of the season through June, Ramirez showed an increased ability to turn fly balls into homers, posting an average of 15.45 percent HR/FB over 183 at-bats. However, from July until the end of the season, a period when he missed over 30 games due to a re-aggravated calf strain, Ramirez posted an average HR/FB of less than six percent over 82 at-bats. Though the before and after rates were well below his average of 21.6 percent over the previous eight seasons, part of Ramirez’s loss of power could have been due to injury or a breakdown of swing mechanics spawned from being hurt. Only time will determine if Ramirez’s power will ever come back. However, one thing is for certain: even an injured, powerless Ramirez can still provide value in the batter’s box.

Within any contract that Ramirez signs lay the ever-present risk of behavioral issues that could result in injury, suspension or retirement. Still, one must keep in mind that, even in a season that had him hitting the disabled list three separate times, Ramirez has shown that he can still be a productive player. He has nothing to offer with the glove, so he will likely have to settle with being a designated hitter for the rest of his career. However, in an off-season that has Lance Berkman emerging as a hot commodity in the DH market, Ramirez should have very little problem landing a gig with an American League team in 2011.

Edmonds has been known throughout his career as one of the few true two-way weapons in center field. While he’s lost a step (or 10) in the field, Edmonds was still able to show value in both aspects of the game last season. Below is a snapshot of what Edmonds was able to do with the bat:

Despite missing all of 2009 in his attempt to hold out for a better contract (a tactic he would later admit was “a mistake”), Edmonds’ bat seemed to be rejuvenated in his time away from the game. While his on-base percentage remained constant through the two seasons, the 2010 edition of Edmonds was able to improve his batting average and slugging percentage significantly when compared to his 2008 numbers. On the defensive side, Edmonds also saw a renaissance in his ability to cover ground in the outfield, posting a 5.2 Ultimate Zone Rating (a flawed metric to some), which was a substantial improvement over the -14.5 he received in 2008. Clearly, on the surface, Edmonds seemed like a new man.

However, not everything Edmonds accomplished in 2010 was kosher. Take his line-drive percentage: at 29.4 percent, Edmonds’ liner rate was well beyond anything a 40-year-old could ever hope to sustain over a full season. Edmonds also saw some fluky production in his at-bats that resulted in fly balls, which greatly exceeds his career mark of .121. On the other hand, though his BABIP on grounders remained within the margin of error for his career, Edmonds' line drives did not fall out of the reach of defenders as much as usual last season, his BABIP of .558 paled in comparison to the .772 he’s posted for his career. While some of this line-drive BABIP discrepancy seems to scream data-entry error, I think we can still reasonably assume that Edmonds’ production won’t be too greatly affected by the expected drop in fly-ball BABIP.

Edmonds, though turning 41 next June, can still be a productive player if he can accept a limited role; a concession he was unable to make in 2010. Edmonds has shown the ability to crush right-handers and play some decent outfield defense, so there is certainly some value left to wring out of him. If Edmonds feels that he is still an everyday player, he'll likely be disappointed with the market. However, if he feels up for another year of fourth outfielder/platoon/pinch-hitter-dom, there will plenty of suitors from which to choose.

Dye is in an identical situation that Edmonds found himself in 12 months ago. After refusing to accept a lesser contract last off-season, Dye found himself sitting at home in 2010. One year later, Dye has dropped his hefty contract demands (besides his desire to sign a major-league deal) and is looking for a job with a contender. Now that we’ve refreshed our memory of the former World Series MVP, let’s take a look at Dye’s 2009 performance:

Still, it wasn’t all doom and gloom for Dye in 2009. After all, the man did hit 27 homers. Also, along with the improved contact rate, Dye walked at the highest clip of his career. However, despite all that warm sabermetric goodness, Dye posted a measly .268 True Average and was only worth a little more than 12 runs above replacement. With a depressed line-drive rate, no value in right field (according to his -21.6 UZR) and numerous other red flags surely brought up in contract negotiations, it's easy to see how Dye’s self-perception and how he was perceived by other teams could have differed last winter. The first two things that jumped out at me were Dye’s low batting average and batting average on balls in play. Despite making more contact in 2009 than the year prior, batted balls were simply not falling in for Dye. A majority of this could be explained by Dye’s inability to hit the ball with authority, as displayed by his 16.9 percent line-drive rate. Dye also struggled with hitting to the opposite field as displayed by his .133 BABIP, which is a far cry from the .260 clip he’s shown over his career. Combine that with the fact that he had major struggles against power pitchers and you’ve got a pretty strong argument that Dye may have lost some serious bat speed.

A big-bat free agent with no defensive prowess will almost always find a DH spot to latch onto, given he hasn’t skipped an entire season due to contract demands. Dye clearly doesn’t fit that bill. Too good to be a pinch-hitter and too poor of a fielder to net a starting job, Dye has found himself in a bizarre free-agent limbo. Though I fully expect Dye to find a bench spot with a team in 2011, one has to wonder if signing a one-year deal without getting consistent at-bats will improve his positioning in negotiations this time next year. It won’t be impossible, but you can color me pleasantly surprised if he pulls it off. Unless Dye has spent the last year aging backward, signing him seems like it has very little upside for all parties involved.

You need to be logged in to comment. Login or Subscribe
jgharrity
I plan to borrow and repeat that apt description of Manny's disappointing "worm killing bloodlust."
Reply to jgharrity
VDracul
Worm killing bloodlust...Makes me long for some Worms World Party.
Reply to VDracul
speedchaser9
My memories of Worms Armageddon makes me want to buy a Dreamcast and relive childhood memories.
Reply to speedchaser9