Every offseason, major-league executives, fans and rumormongers are met with storylines and situations involving free agents who are considering retirement prior to the upcoming season. To prevent any sort of Favre-ian ambiguity, this article will serve as a sort of indirect advisory notice to a few pitchers who are on the fence in regards to returning to play next season. By taking a look at a few of the metrics we have here at Baseball Prospectus, we’ll be able to see which players can expect to see their numbers improve or worsen in 2011, allowing us to give the named players a insightful nudge towards playing or towards retirement.

Pettitte is a classic Yankees pitcher known for his post-season resume and incredibly strong chin. In 2010, the Louisianan lefty threw 129 innings of 3.28 ERA ball, displaying strong peripherals, including his highest K/9 and lowest WHIP since his days with the Astros. Here’s a more detailed look at what Pettitte was able to accomplish as a 38-year-old last season:

At first glance, Pettitte’s 2010 numbers look to be in line with what we’ve come to expect from him. However, a questionable aspect of Pettitte’s statistics last season was the noticeable gap between his SIERA and ERA, indicating that the lefty may have outperformed his peripherals. Still, even with the discrepancy, Pettitte’s 4.00 SIERA still qualified as the 52nd-best among starters with at least 129 innings pitched last season, ahead of fellow lefty C.J. Wilson and fellow AL Easterner John Lackey. Also, despite dealing with a strained groin late in the season, Pettitte contributed what was arguably the second-best starting pitching performance on the Yankees staff, just behind CC Sabathia and just ahead of Phil Hughes.

One place Pettitte will most likely regress is his performance with runners on base. Along with his fairly high strand percentage, as represented by the LOB% rate above, Pettitte also had a very lucky BABIP in situations where he was dealing with baserunners, displayed in the chart below. 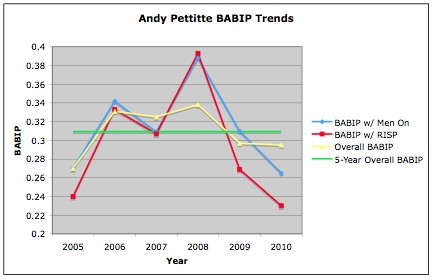 As we can see, Pettitte was very lucky with batted balls in situations with men on and with running in scoring position, which was also the case in 2005. Of course, as many Yankees fans will remember, Pettitte followed up his masterful 2005 with a 2006 season that included an ERA that nearly doubled, leading us to believe a similar decay in performance could be in store the next season. However, one major difference between these two seasons is the fact that, unlike in 2005, Pettitte’s very low 2010 BABIP with runners on and with RISP are greatly out of step with his overall BABIP. This leads to the conclusion that, though Pettitte’s performance with ducks on the pond should decline, some of the pending regression will be offset by a bases-empty BABIP that will simultaneously fall.  Still, when it's all said and done, one can expect some noticeable deterioration in performance if he pitches in 2011.

While it seems that Pettite’s overall luck and his fortune in high-leverage situations will eventually run dry, it’s very possible for him to keep performing at a more-than-respectable level, especially when one takes his 2010 SIERA and overall BABIP into consideration. After all, when you have such 2010 Gold Glovers as Mark Teixeira, Robinson Cano and (ahem) Derek Jeter playing behind you, one can expect favorable things to occur with balls in play. Expect  Pettitte to re-sign with the Yankees and pursue one last World Series ring.

Having played for three different organizations from 1989-93, Trevor Hoffman was closed to being labeled as a journeyman early in his career. Now, 18 seasons and all-time record 601 saves later, Hoffman is considered to be one of the best relief pitchers ever. However, Hoffman is considering retirement following a terrible season in Milwaukee. How terrible of a season, you ask? Let’s look at his line from 2010:

When a veteran free agent posts a VORP below zero, chances are that his agent will not be getting an abundance of calls. While we can assume Hoffman’s resume will prevent Rick Thurman’s cell phone from remaining completely silent this offseason, signing the aging reliever looks to be a losing proposition for all parties.

Though significantly more dramatic, part of the problem for Hoffman in 2010 was along the lines of what we’ll be expecting for Pettitte in 2011. During 2009, Hoffman put together another stellar stat line, contributing a 1.83 ERA, 22.6 VORP and 3.362 WXRL as the Brewers' closer. Contributing to that performance was Hoffman’s subterranean BABIP, which was unsustainably burrowed at .231. As one might have expected, Hoffman’s BABIP exploded in 2010, rising above the .280 plateau for the first time since 2005. Contributing to this BABIP decay was the ever-diminishing effectiveness of Hoffman’s pitches. While mediocre velocity has never seemed to hurt the righty in the latter part of his career, Hoffman’s arsenal did seem to lose some effectiveness this year; even his bread-and-butter pitch, a devastating mid-70’s changeup, was crushed by opposing batters in his second season with the Brew Crew. This eventually led to Hoffman relinquishing the closing duties to the effectively wild John Axford, banishing the former Padres great to middle relief obscurity.

That said, there is some room for optimism for Hoffman. For instance, Hoffman could potentially improve on a few performance factors that were skewed by his awful start to last season. Take the righty’s left on base percentage, which was 65.1 percent. Hoffman stranded runners at the lowest rate of his career, which could be improved by moving away from a Brewers defense that ranked 29thin Defensive Efficiency last season.  Also, while modest, Hoffman’s SIERA-ERA differential hints at some undeserved ERA inflation and could provide sanguinity for fans of the reliever. Additionally, Hoffman’s home run per fly ball ratio was very high relative to his career mark of 6.3 percent and has room for improvement. Finally, though the regression was expected, Hoffman’s BABIP did wind up noticeably above his career rate of .266 and could bounce back to something closer to that figure. Being able to improve on at least one of these areas (or just erasing April and May of 2010 from his memory) could potentially make Hoffman a serviceable bullpen arm next year.

Clearly, Hoffman is not quite as bad as his 2010 line suggests, but anyone who considers another 2009 season to be anywhere the realm of "likely to occur" next season will be deemed quite bold in my book. Given his current need-to-close requirement and potentially lucrative contract demands this offseason, it’s hard to imagine a situation that would make sense for both Hoffman and a club. Unless a World Series contender such as the Phillies sign him to an incentive-laden deal, it might be time for Hoffman to hang up his spikes and wait for the call to Cooperstown.

OK, I admit it, selecting Wagner for this piece is bordering on cheating. After all, the man made an official announcement about his retirement in mid-October. Still, after a monster performance for the Braves in 2010, Wagner convinced me to investigate how replicable his most recent season could be. Below is a snapshot of what Billy the Kid did last year:

As we can see, this fireballing left-hander was just crazy good in 2010. Making Wagner’s performance even more impressive is the fact that it occurred just two years after he underwent Tommy John surgery that limited him to just 15 2/3 late-season inning in 2009 with the Mets and Red Sox. Wagner showed enough to sign a one-year contract with the Braves worth $7 million with an option for 2011.  Equipped with his signature slider and an even quicker fastball than he had before being injured in 2008, Wagner was a sharp as ever whilst closing in Atlanta, putting together an excellent final season.

Though his stuff matched the results, there were many who looked at Wagner's 2010 performance through a skeptical lens. While Wagner did have a low BABIP, it really wasn't out of the realm of possibility considering his career mark of .265. One could also call shenanigans on Wagner’s performance by citing his .08 home run per fly ball rate in 2010, which was lower than his career mark that rests closer to .10, but even that claim might be grasping at straws. No, the only real fluky part of Wagner's performance in 2010 may have his strand rate, where he was able to manage an additional 5.5 percent of stinginess with runners on the basepaths over his career average. Still, even with a bit of luck on his side, Wagner was able to sport the league's best SIERA of pitchers who had more than 69 innings of work by a large margin. Beyond those nitpicky points of discouragement, it's really hard not to buy what the Virginian was selling last season.

Short of winning a World Series, Wagner was able to end his career on a very high note, which is something that often eludes many pitchers' grasp when their time to accept retirement comes. While it is not quite as certain as it is with Hoffman, Wagner, too, could be receiving a call to the Hall of Fame in the future. Until that day, however, Wagner will be more than welcome to toe the rubber for another season in the bigs if he decides to unretire.

Verdict: Reverse his decision and play

You need to be logged in to comment. Login or Subscribe
jgharrity
Hoffman blew one of his biggest saves (saving self from Favre syndrome) by not retiring after 2009 season.
Reply to jgharrity
NYYanks826
Hey Chase, this was a cool article, thanks.

Just one little nit-pick though. It looks like Trevor Hoffman's K/BB ratio is wrong. He had 30 K and 19 BB last year, so his ratio is actually 1.58.

Feel free to suggest some hitters that you'd like to see in the next edition!
Reply to speedchaser9
GrinnellSteve
Interesting piece, Chase. Manny Ramirez would be an obvious hitter to look at. I'd also love to see what you could do with Jermaine Dye.
Reply to GrinnellSteve
NYYanks826
I agree on Jermaine Dye. Maybe Jim Edmonds, even though I don't know if he had enough PA to really have a good write-up on.
Reply to NYYanks826
maloneb4
Just curious if you think the fact that Billy Wagner is still on the Braves' 40-man roster is an indication that the Braves hope to change his mind, or do you figure he'll be dropped as the Rule V draft approaches.
Reply to maloneb4
speedchaser9
While I can't say for sure, I believe Wagner's presence on the roster may have something to do with the fact that his $6.5 million option for 2011 was guaranteed upon him reaching the 50 Games Finished plateau during the 2010 season. Wagner was able to finish 64 games last season (good for 3rd in the league), thus his option was exercised.

Though the Braves would be foolish to give up on a potential Wagner comeback before it is absolutely necessary, I'd be very surprised if he isn't eventually removed from the roster and placed on the club's Voluntary Retired List.
Reply to speedchaser9