With Hisashi Iwakuma and Tsuyoshi Nishioka getting most of the spotlight these days, there is one Japanese free agent, who already has major-league experience, that rarely gets the attention he deserves: Takashi Saito. Born on February 14, 1970 in Miyagi, Japan, Saito first saw action in the major leagues at the ripe age of 36 as the Los Angeles Dodgers’ closer. Since that masterful 2006 season, the former Yokohama Baystar has been good for at least 47 innings of (usually) excellent relief work per season. Now Saito is entering his third consecutive offseason as a free agent, leaving many teams to wonder if he will be worth the $2-4 million he is likely to command in 2011. The jury is still out on whether this perpetual free agent is truly deserving of another contract next season but, taking a look at his statistical performances and medical track record, that determination should become much clearer.

First, let’s take a look at why Saito has been driven to sign one-year contracts for the last couple seasons. The most obvious answer to this question is his age. Turning 41 before the beginning of the 2011 season, Saito is no spring chicken by baseball standards. However, despite the annual questions about his aging body, he has still been able to contribute effective relief innings year after year. Below we can see exactly how well this righty has performed over his major-league career:

As we can see, Saito has been quite effective since he jumped the puddle prior to the 2006 season. Then again, if we take a look at the performance Saito had in 2009, we can see exactly what teams are looking to avoid when deciding if they should sign him. That fateful season with the Red Sox would have been the nightmare scenario (short of a season-ending injury, of course) for any team that signs Saito, especially if the unsustainably high 89.40 percent left on base rate had dropped closer to his career average. While the strikeout rate remained above average, Saito regressed in most of his peripheral categories, showing just how volatile his (as well as any reliever’s) performances can be.

Perhaps linking both his age and volatile performances together, Saito’s extensive injury history is something teams will also have to closely analyze before committing payroll to him. In the past year, Saito has dealt with a hamstring injury, vision problems, and a bit of shoulder tendonitis that kept him out for the last month of the regular season and the playoffs. During the 2008 season, Saito was also one of the first patients to receive a PRP, a procedure in which, as described in the 2010 Baseball Prospectus Annual, “platelet-rich plasma was injected into his pitching elbow to treat a partially torn UCL that otherwise might have led to Tommy John surgery.” Needless to say, Saito is no stranger to the trainer’s room, which has (correctly) scared teams away from committing to a long-term contract with the right-hander.

It is apparent why Saito is getting signed to these one-year agreements every season. However, the question still remains: is Saito worth signing for another year?

The quick answer is yes, absolutely. I don’t think there is any doubt that Saito has something potentially valuable to offer next season. Statistically, Saito has shown that he can hang with anyone in terms of reliever performance. Even with last year’s injury-plagued season, he bounced back from his mediocre 2009, as shown in the chart below: 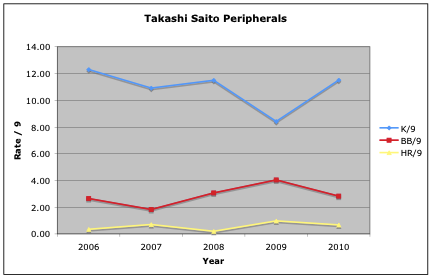 Displayed graphically, we can see how dramatic Saito’s improvement from the 2009 to 2010 really was. With a skyrocketing K/9 and both his BB/9 and HR/9 falling back to Earth, it is no surprise why Saito, even at his advanced age, was one of the top pitchers in terms of SIERA last season and is a Type-A free agent.

Of course, when the words “Type-A free agent” and “reliever” are put together, many teams will run for the hills instead of surrendering draft picks for a bullpen arm. However, one unique thing about Saito’s free-agent status is that, while he is considered e a Type-A free agent, he will not cost any compensation picks for the next team that signs him. This is due to a stipulation in his contract, common among those for mature Japanese imports, which forced the Braves to release him within 11 days of the conclusion of the World Series, thus sparing the right-hander from dealing with the arbitration mess. This creates a win-win-win scenario for Saito, his next team, and the Braves as it prevents Saito from getting Juan Cruz’d, allowing his future team keep their draft picks (or at least sacrifice them for a different player) and letting the Braves evade the chance Saito would accept arbitration, letting guys like Jonny Venters and Craig Kimbrel take on greater roles in their bullpen.

The biggest factor in determining if Saito will be worth tendering a contract to is health. Any team considering Saito will need to invest significant time and energy examining his shoulder and elbow, especially when one considers Saito’s next pitch could result in a career-ending injury. On the other hand, this injury history could be a blessing in disguise; given relievers’ volatility, many teams would prefer to give the majority of free-agent bullpen arms one-year contracts. However, the current state of the free-agent market makes this nearly impossible, leaving Saito in a unique position of offering elite-level performance, while only requiring a one-year (plus an option?) commitment from his future team. He offers some of the best performance potential in this year’s free-agent reliever class, though he may have more injury questions than the average free-agent reliever. This should result in negotiations with plenty of teams, giving him many different clubs to choose from in what will almost certainly be his final season in the MLB.

Requiring only a one-year commitment while offering a great-but-volatile track record of performances, it’s a surprise that Saito is not talked about more during the Hot Stove League. Though his days of 70-plus innings pitched are over, if he can stay healthy, Saito can still be a meaningful contributor to any relief corps.

You need to be logged in to comment. Login or Subscribe
bornyank1
So let me get this straight: you acknowledged that Saito was born in Miyagi, but failed to refer to him as "Mr. Miyagi" even once. Sounds like seppuku is in order.
Reply to bornyank1
LlarryA
"Show me...strike-out-the-side..."

You relief pitcher do, okay. You relief pitcher not do, okay. You relief pitcher "guess so" -
Reply to LlarryA
jm010e
Saito has had a ludicrous statistical MLB career (recall, he was a 36 year old rookie). Career totals: 2.19 era, 1.002 whip, 11.0 SO/9, 2.8 BB/9. Yikes.
Reply to jm010e
cavebird
While the Braves want the kids to shine, as a Braves fan, I wouldn't mind Saito back in Atlanta at all. I don't think the contract stipulation is really a win for the Braves. It was obvious and required, however, given his status---he doesn't have the service time to be a free agent yet, and it wouldn't be fair to make him a normal arbitration guy.
Reply to cavebird
speedchaser9
I feel that, given he was offered arbitration, Saito would be getting a raise from his $3.2 mil + incentives deal for 2010. I wouldn't be surprised if he came back to Atlanta, but it would probably be at a cheaper price. That's partially why I felt the Braves would be getting a "win" there.
Reply to speedchaser9
SweetWilliam
As a strat-o-matic player, I always thought he was underrated. He had some great cards.
Reply to SweetWilliam
Kampfer
Is Saito worth signing? He was one of the very best reliever in all of MLB last year. His five year average is comparable to the like of Mariano Rivera.
Reply to Kampfer
speedchaser9
Sounds like someone just read an extremely informative article.
Reply to speedchaser9