According to Patrick Newman of NPB Tracker and Larry Stone of the Seattle Times, the Tohoku Rakuten Golden Eagles will make their pitcher Hisashi Iwakuma available to American major league teams through the posting process this month.

What follows is a brief scouting report on Iwakuma based on PITCHf/x data from three games he pitched in the World Baseball Classic (WBC) in 2009.  Iwakuma throws five pitch types: a four-seam fastball, a sinking fastball (or shuuto), a split-finger fastball, a slider, and a curveball.

The following chart shows Iwakuma's pitch speed vs. the left-right movement on the pitch, color-coded by pitch type. 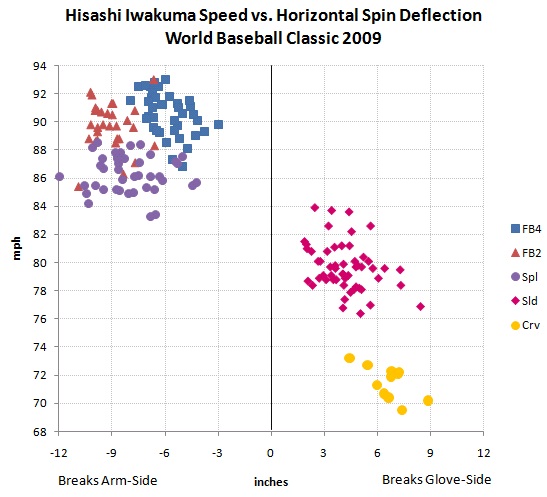 The chart below shows the movement on Iwakuma's pitches from both spin and gravity. 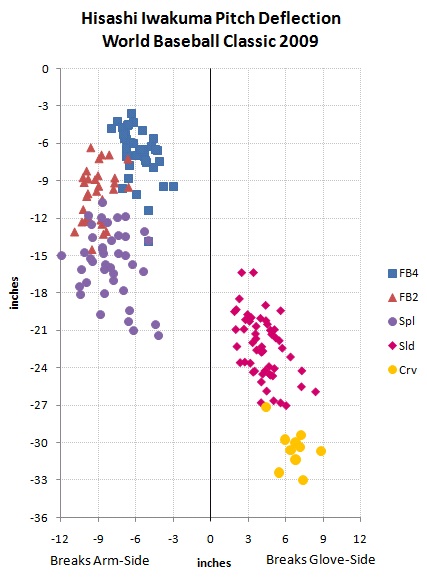 Iwakuma's two-seam, or sinking, fastball averaged 90 mph, and he got eight inches of hop and nine inches of tail on the pitch, which is about four to five inches of movement relative to his four-seamer.  He threw the sinker 17 percent of the time to left-handed batters and 18 percent of the time to right-handed batters.  He did a better job throwing this pitch for strikes (68 percent) and he induced six ground ball outs against four air balls. Here is a photo of his two-seam fastball grip.

His split-finger fastball averaged 86 mph, and he got three inches of hop and eight inches of tail on the pitch due to spin.  Adding in the effect of gravity, the splitter dropped about nine inches relative to his four-seamer.  He threw the splitter 31 percent of the time to left-handed batters and 20 percent of the time to right-handed batters. It was his main strikeout pitch, accounting for five of his nine strikeouts in the last three games of the WBC.  Batters swung and missed at 34 percent of his splitters, which is an excellent mark.  Here is a photo of his split-finger grip.

Iwakuma's splitter is the only pitch that strikes me as an above-average major league pitch.  His other pitches seem passable, but I'm somewhat skeptical whether they will play against major-league hitters.

If you're interested in other scouting takes on Iwakuma, read this recent post at Amazin' Avenue or Josh Kalk's write-up of Iwakuma's performance from 2009.

You need to be logged in to comment. Login or Subscribe
mikefast
I just ran across the article by Patrick Newman on Iwakuma and recommend it for anyone who is interested:
http://www.fangraphs.com/blogs/index.php/thoughts-on-iwakuma/
Reply to mikefast