Closers throw hard. Of course, no proviso in baseball’s convoluted rule book decrees that they have to. Still, since the days of its genesis, high velocities have become so closely associated with the fireman role that the belief that the two should go hand-in-hand has attained something approaching the status of a natural law. In one sense, this shouldn’t be shocking. Velocity aids effectiveness, and closers often earn their jobs by becoming their managers’ most effective bullpen options, so it stands to reason that there’d be significant overlap between the sets of hard throwers and guys who get saves. What’s more, closers are supposed to arrive on the mound accompanied by an intimidating entrance song; I don’t know about you, but I’d feel a little silly pumping mid-80s fastballs toward opposing batters after recruiting Killswitch Engage, Metallica, or P.O.D.  to announce my presence (actually, I’d feel pretty good about having mid-80s heat, regardless).

Of course, pitchers don’t necessarily need to throw hard to be successful, so maybe it’s surprising that we don’t see a few more soft throwers racking up saves. However, at least one current closer qualifies: Koji Uehara. If a pro-fireballer bias pervades major-league coaching staffs, preventing soft tossers from earning saves, the Orioles don’t seem to share it. Here’s a plot of the average fastball velocity of every reliever who’s accumulated at least 7 saves (Uehara’s tally to date) this season: 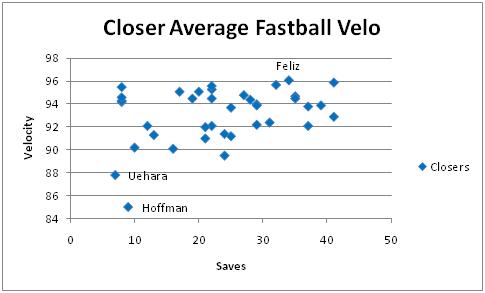 Most closers reach the mid-90s regularly, paced by Neftali Feliz, whose fastball averages over 96. Uehara may possess sideburns long enough to make Eric Seidman jealous, but his fastballs have broken 90 only 14 times this season, and even then only barely, maxing out (once) at 91. The only pitcher who’s received a significant number of save opportunities while throwing more slowly than Uehara is Trevor Hoffman, who’s been allotted as many chances as he has only because of his proximity to a career milestone (of course, Hoffman’s thrown harder in the past, though he’s never been one to test the limits of a radar gun or a Sportvision camera; his career is a testament to the deceptiveness of his mid-70s changeup).

Uehara’s fastball is slow even by starter standards; in the 66 serviceable innings he gave the Orioles out of the rotation last season, his fastball averaged 87.4, only slightly slower than it has in relief in 2010, and faster than only 9 other starters with a minimum of 60 innings pitched. This season, the fastballs of only 13 relievers have taken more time to reach the plate than Uehara’s, on average.

Despite his stuff’s lack of celerity and a translator with a name straight out of Austin Powers, Uehara has had little trouble retiring major-league batters, and had maintained a perfect record in save opportunities since inheriting the role from Alfredo Simon until Nick Swisher walked off against him on Wednesday. He’s struck out 36 batters in 33 1/3 IP while walking only 5, a sound recipe for success at any speed; as a result, his 2.70 ERA keeps company with a 2.87 SIERA. Although Uehara has spent the vast majority of his career as a starter, he has taken a successful crack at a closing gig before: after returning from injury in 2007, he racked up 32 saves, 66 strikeouts, and only 4 walks in 62 IP for the Yomiuri Giants. Given his achievements in a short relief role, and the succession of maladies from which he’s suffered over the past few seasons, the bullpen seems like his most likely home going forward.

Recently, deposed closer Mike Gonzalez had this to say about Uehara’s performance this season: “[Opposing hitters] see an 85 mile-an-hour fastball, you don't think he's going to throw it again, and there he goes, right back at you. It's different. He's got guts. You don't see many people doing things like that.” I’m sure Gonzalez intended that as a compliment, but to me, his words of praise came out sounding like this: “He’s getting by because opposing hitters don’t suspect that he’s going to throw that weak sauce multiples times in a row. Going out there with that kind of slop takes courage. You don’t see many people who aren’t ashamed to debase themselves like that on a major-league mound.” Okay, so maybe that's a little harsh. Uehara's heater may not possess the power to summon the Fail Whale, but its precision has served him well thus far, and the Orioles deserve credit for their willingness to entertain the notion of employing a slightly non-traditional closer.

You need to be logged in to comment. Login or Subscribe
pobothecat
Interesting. Maybe I'm surprised to learn about his lack of velocity for the same reason that he gets away with it. His stuff may not be hard but it looks, somehow, quick. Sharp. (Your "weak sauce" translation reminds me of Doug Jones. Remember him? Indians and Astros closer from the early 90's whose change-up was a change-up on his change-up which was really just a change-up on his change-up?)
Reply to pobothecat