This is a quick little follow-up to this morning's look at positional adjustments.

So far the most common response has been, can't we have a graph baselined to the league RPA? And my counter-response – sure you can! 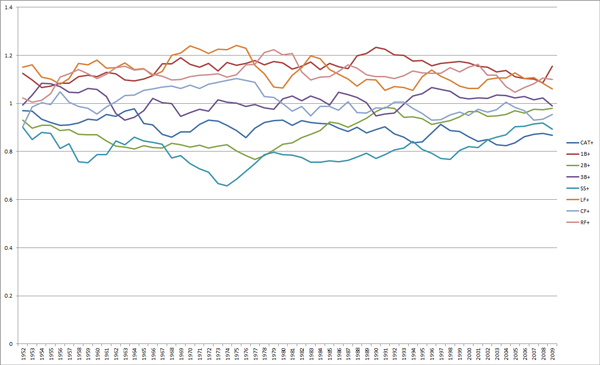 Even better, this one is also a link to a bigger version of the graph, so you can see things more clearly. If you'd like, you can also play with the data in a table.

Something from the discussion in the comments I want to further tease out. Justin Inaz of Beyond the Boxscore asks if there isn't a problem with assuming all positions are equal. He's certainly right that is a problem, but it turns out that's not what we're doing. For instance, if you take the average center fielder from 1955 (without correcting for skew, as I have) in a full season, in this system he'll probably be +5, assuming neutral defense. A left fielder is going to be more like a -2. So you aren't forcing everything to zero – center fielders as a group were more valuable than left fielders that year, and you're capturing that difference. I think it's important for us to note that while over long periods of time there will (probably) be equilibrium between the positions, over the short run (and by the short run I mean as much as a decade or more, like the center fielders in the 50s) anything can happen.

And that's why, after having made my adjustments as best I can, I'm living with some things that seem wonky. You've got a little three year dip or so in the third basemen in the early 90s, where they are just a shade below second basemen. Is that a data artifact? Or was that a dry spell for third basemen, which teams corrected over time? Remember that baseball players aren't totally fungible – sometimes you end up with one team having a surplus at one position, and another team having a deficiency, and so some players end up playing not the position they're best suited to, but the position their team has the greatest need at. I don't want to practice Jack Bauer sabermetrics – it turns out that data sets are like criminal suspects; under duress you can make them say anything you want. So you read the data its Miranda rights and go from there.

Which brings up a point from one of the comments over at Tom Tango's blog – jar75 notes that "(t)here has been a bit of a shift in this area though as teams have started to play guys who can cover a lot of ground in LF: Carl Crawford, Brett Gardner, Juan Pierre, Jose Tabata, Nyjer Morgan (as a Pirate), et alii." And you can actually see that reflected in the graph there – left field has dipped a bit while right field has stayed mostly flat. Historically, we've seen on major switch between RF and LF on the defensive spectrum already. Are we in the midst of another one, or is this just a short "blip?" I think it'll be a few years before we find out for sure, but I find it an interesting question.

You need to be logged in to comment. Login or Subscribe
JinAZReds
Colin, thanks for the response. I understand what you've done better now than I did earlier. I'm surprised that you can pull that result out of the hitting data by essentially just using the shape of the distribution. It runs contrary to my view that the Mays issue is more of a difference in population at each position, and supports yours that this is largely an outlier-based issue. That really surprises me, but you might be right.

I'm still not convinced that hitting data is the best way to measure position adjustments, which as you said in your intro are fundamentally fielding skill differences among positions that doesn't show up in fielding stats. But what you've done does seem to be "working" in that the output makes sense. It's definitely performing a heck of a lot better than any of the traditional offense-based position adjustments.

Cheers,
Justin
Reply to JinAZReds
mikefast
Justin, I'm still trying to wrap my mind around this. When you say "it's definitely performing a heck of a lot better than any of the traditional offense-based position adjustments", what do you mean specifically? How can you tell?
Reply to mikefast
JinAZReds
The best example is the 1950's CF issue that Colin started his article with. In that case, in that year, CF's hit better than corner outfielders. And so if you use a traditional offense-based position adjustment (like has been used in WARP, VORP, etc), it would actually penalize a player for being a CF compared to a LF even though the average CF is probably both a better hitter AND and a better fielder than the LF! Colin's approach seems to fix this problem, at least for the most part: CF is still recognized as being a premium defensive position, and thus gets a positive position adjustment while corner outfielders get a negative adjustment. I'm sort of surprised that it works, but it seemingly does.

The 2B vs. 3B issue has been proposed as another modern day case of this problem. Players who play both positions have historically (since 2003 or so, iirc) played each position (on average) equally well. There are sampling biases with those data that Colin is right to question, but there is still an argument to be made that both of those positions are roughly equivalent in terms of average overall fielding skill. *IF* that is true, and it is the case that 3B's are better hitters (on average) than 2B's, then third base would be a position with more talent than 2B: equal fielding skill, better hitting skill. The traditional offense-based adjustment would overrate 2B's and underrate 3B's under that scenario.

Now, it might be that finding of equal fielding at 2B & 3B is erroneous and is instead the result of sampling biases with respect to what sorts of players get to play both positions (or some other assumption). So maybe it's not the case. But it's always a risk you take when you use a traditional offense-based position adjustment. Looks like Colin's approach might be something you can use to help get around this issue. Whether it's enough to stand on its own as the way to calculate position adjustments, I'm not sure yet...