"Bud Selig is my hero. He has taken baseball to a far better place than where he found it." – Hank Aaron

Hank Aaron actually isn’t totally off (at least on the second part). Baseball probably is in better financial shape now than it has ever been, and last week’s leaks did nothing to prove otherwise. As I wrote last year, there have been some serious pitfalls during Selig’s tenure but also some major victories. And when you look at the big picture, in terms of revenue growth relative to U.S. GDP, Selig has far outpaced any other commissioner who had been on the job for at least five years: 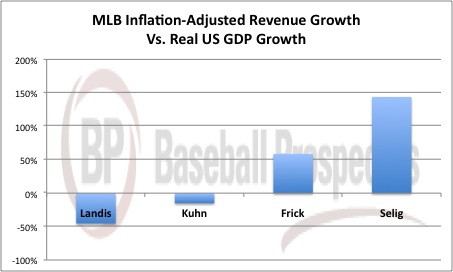 (A couple notes: all of this financial data comes from Rod Fort’s indispensable site. Judge Kennesaw Mountain Landis’ first few years aren’t counted, because we don’t have any financial data from before 1929. This chart updates the numbers from last year’s article, to include 2009, and is done on a per team basis, so there’s no advantage for commissioners who oversaw big expansions.)

Bud has outpaced the GDP by almost 150 percent, far more than Landis, Bowie Kuhn, and Ford Frick. (Landis and Kuhn actually trailed the U.S. economy.) So despite all the mishaps, the results are clearly there.

But thinking a bit deeper, how much credit should we actually be giving Bud? Was it his moves and his decisions that caused this historic growth? Or was he simply at the right place at the right time?

The first step is to see where the growth actually came from. In 1992, Fay Vincent’s last year as commissioner, MLB brought in nearly $1.6 billion in revenue. Last year, the number was $6.6 billion. How did they get from A to B? Here’s a quick breakdown: 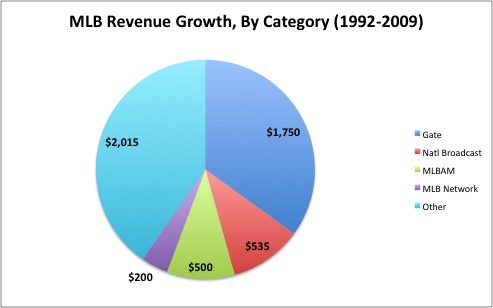 The two biggest chunks, by far, are gate and other, with other mostly consisting of local media, local corporate sponsorships, and luxury suites. Note that these are squarely local revenue sources, meaning MLB has grown mostly because the teams’ businesses themselves have grown, with national broadcast revenue, MLB Advanced Media, and MLB Network only being secondary sources.

So how much of this can Bud take credit for? Let’s go item-by-item:

The pool has certainly increased, but there’s been nothing terribly creative about it. The NFL and NBA have also seen their fees go way up, and MLB would’ve had to be pretty poorly managed not to be where it is today, in this respect.

Selig did one great thing regarding MLB’s digital business: he pooled it, meaning that all 30 teams share proceeds equally. That is a major win for small-market teams (whom Bud has always fought for), both now and in the future.

But MLBAM really hasn’t been the incredible success story that everybody makes it out to be. It has certainly been successful, and its products are truly amazing, but $500 million in annual revenue for a 10-year-old company with a monopoly over baseball tickets, merchandise, and content really isn’t all that impressive. And it certainly shouldn’t be credited to Bud—it would have been hard not to get MLBAM to where it is now (financially, at least), given how the Internet has grown over the last 15 years.

MLBN is basically the same story—it’s a nice supplemental value source for MLB, but it’s also about what you’d expect, given how the other leagues have performed in this business. Earning $200 million per year is actually kind of disappointing, relative to what the projections were going in, so I wouldn’t characterize this is a major point for Bud either.

This one, however, has Selig’s hand prints all over it, and it’s the area where MLB has seen by far the most growth. Two initiatives in particular have had enormous impacts on MLB’s local businesses: the stadium boom, and the expanded playoffs.

The latter is pretty self-explanatory. New stadiums have created better game-day experiences (which, in turn, have led to more demand for tickets) and far more higher-end inventory, such as luxury suites, boxes, clubs, and restaurants. These have also had a positive impact on local media contracts and corporate sponsorships, both of which depend on eyeballs and butts in seats.

Other commissioners pushed hard for new stadiums, as well. But Selig has always made it his top priority (in non-CBA years), and that dogged pursuit has led to new buildings in most MLB cities—including those that weren’t exactly prime candidates in the mid-’90s (e.g. Pittsburgh, Miami, Milwaukee, etc.). You can say what you want about local governments funding these projects (I’m not a fan either), but given his duties as baseball’s CEO, Bud has done this extraordinarily well.

The same goes for the wild card and expanded playoffs, which took a pretty serious amount of chutzpah to do, considering how much it was hated at the time (and even now, to some extent). But despite all the drama, this has been an incredibly successful move, from a financial perspective—there are now two to three times as many teams in a playoff race as there were 20 years ago, and September attendance has shot up far more than any other month.

Nate Silver wrote about this trend a few years ago in Baseball Between the Numbers. Here’s a look at the updated numbers, through 2009: 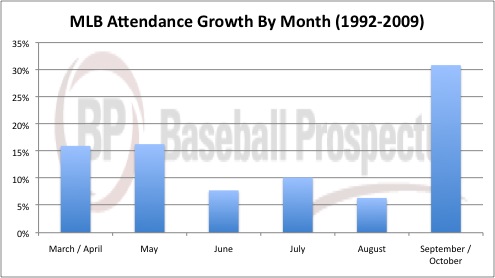 Every month has risen, meaning that the overall demand for baseball tickets is obviously higher than it was in the pre-wild card era. (Especially after you take into account higher ticket prices.) But September stands out, growing twice as fast as any other month—about 31 percent, all told. April and May are usually pretty good comps, since kids are in school and the weather can be cold, but clearly they’re no match.

(By the way, interleague play took some chutzpah, too, but it hasn’t had nearly the same financial effect as the expanded playoffs.)

So while Bud has certainly been fortunate in some ways, he’s also pushed through some really important changes that have helped increase baseball’s revenue by more than 300 percent over the past 18 years. He may not end up being remembered fondly by the fans and the media, but his shareholders sure as hell should be appreciative.

You need to be logged in to comment. Login or Subscribe
Michael
Great graph, making a very solid case for the expanded playoffs from a business perspective. Thanks!
Reply to Michael
ScottBehson
If you are not giving Bud credit for raising several revenue sources, at least you should give him credit for not screwing them up or for not getting in the way.
Reply to ScottBehson
khaulotte
Dear Bud - I watch 100+ games per year on MLB network over the internet on my TV (through both my Roku and PS3). You could make more money by adding commercials vs. between innings flashing a screen "commercial breaks in progress"

Reply to khaulotte
flalaw
They've gone the commercials route before on mlb.tv, and unless they get dozens of advertisers willing to run different ads, you'll end up with what we had before - the same old Dick's Sporting Goods or Umpire Training School ads running over and over again until they drive you up the wall.
Reply to flalaw
cubfan131
Not to beat a dead horse but you could also make more money by getting rid of local blackouts. I'm in Iowa and I'm blacked out from watching 6 teams which means I have zero interest in MLB.tv or MLB extra innings. If it weren't for the blackouts I would probably subscribe to one if not both packages.
Reply to cubfan131
kcboomer
The fans, generally dislike (hate?!) Selig but he has given them 16 years of labor peace. He has kept the owners in line and functioning as quasi-unified body. Failing to factor that into the "economic growth" formula is an omission of no small amount.

Likewise, the players are not fond of him either and all he has done is make them filthy rich (as a group).

The owners, rightly so, have great respect him as he has done for them what he did for the players.
Reply to kcboomer
marioreturns66
This is definitely true, and it should absolutely be factored in. But I'm not sure this isn't a chicken-and-egg situation... the labor peace -- especially in the last 5 years -- has largely come because everyone is making money, and generally happy with the current system. If MLB hadn't been growing, would there still be labor peace? Not totally sure.

That said, you're right, it definitely has had a positive impact.
Reply to marioreturns66
harderj
Thanks for the article. I do think that getting owners to agree to equally share internet revenues was a stroke of genius...at the time (and, as you point out, even now), a small percentage of overall revenues.

Getting rich teams to agree to give up a share of something they didn't already have was easier than something like agreeing to a greater luxury tax or, heaven forbid, a salary cap. If internet revenues continue to grow, as I expect they will in this technological age, it will provide more of an equalizing force, which I think is good for baseball. Plus, the players union can't disagree with something that distributes revenue more equally, can they?
Reply to harderj
Richie
I believe the Players' Union has disagreed with distributing revenues more equally. Allowing teams to keep every penny they generate puts more value on acquiring players to help them do so. So long as the weakling franchises aren't thus put out of business.
Reply to Richie
StatsGuru
I would disagree slightly about MLBAM. In the past, MLB was very slow to adapt to new technologies, believing they would keep fans away from the park. It took a long time to get all games on radio, and when I was young, only about 1/2 of Yankees and Mets games were on television. Selig letting baseball embrace the internet was a huge break from the past, and Bud should get credit for that.
Reply to StatsGuru