Saying Jose Bautista's 2010 season came from out of nowhere is an assertion worthy of understatement of the year. Bautista has 43 homers and is slugging .620 for the Blue Jays with an Isolated Power almost as lofty as the batting average of league-leader Josh Hamilton. Prior to 2010, Bautista had a career line of .238/.329/.400 over 2,038 plate appearances, with 59 homers. That's a homer every 30 at-bats, whereas this year he's going deep once every 11 at-bats.

It is clear this is a special year for Bautista, and that it's going to be a career year for the 29-year-old. The more important question is, "Where does Bautista go from here?" Does he return to having some power, but not much of a batting average or on-base percentage to support it? Or does he end up somewhere in between the old Bautista and the exciting new one that has the hearts of Toronto fans all aflutter?

Jose Antonio Bautista was selected by the Pirates in the 2000 amateur entry draft. The 20th-round selection was a draft-and-follow who attended Chipola College, a two-year school in Florida,and would have been a pick in the first three rounds of the 2001 draft had the Bucs not eventually signed him to a contract for $559,500—look no further than the bonus amount for proof of that, as that was mid-second round money in the 2001 draft. Bautista got started on his professional career the next year at Low-A Williamsport in the New York-Penn league, and hit .286/.364/.427. That put him as the 14th-best player in the Pirates' prospect rankings, according to Baseball America:

His quick hands and ability to make adjustments particularly impressed the Pirates. He has good power and can turn on a ball while also hitting for average… He sometimes shows a hitch in his swing that will have to be eliminated.

Bautista would do well in Low-A-ball in 2002, hitting .301/.402/.470 in 438 at-bats for Hickory. This would move him up the Pirates' rankings to the seventh-best prospect in the organization, where Baseball America talked about his "good eye for a young hitter" and how he had not yet translated "his bat speed into power… though that should come as his body fills out." The key line from this, though, is that he was not expected to reach the majors until 2006—file that note away for later.

Bautista's next two seasons were essentially lost ones, as he missed much of 2003 with a broken hand after a promotion to High-A and then spent 2004 bouncing from major-league team to major-league team due to Rule 5 draft madness. He was the first player to be on five major-league rosters within the same year, thanks to playing for the Orioles, Rays, Royals, and Pirates, and sitting on the Mets’ roster after being acquired from Kansas City before being sent back to Pittsburgh in another trade later the same day. He had been selected by the O's in the Rule 5 draft, claimed off of waivers by the then Devil Rays in June, traded to Royals later that month, then went to the Mets without playing a game and was traded back to the organization that had his rights prior to the season.

During all of this, Bautista, who had lost a season of development the year prior and wasn’t supposed to be ready for the majors until 2006 even before that, hit .205/.263/.239 over 96 plate appearances. The highest level he had been at prior to this was High-A, and that barely counts given how little he played there—it's no wonder it took his career awhile to get back on track. Baseball America still thought well of Bautista, putting him as the 12th-best prospect in the organization heading into the 2005 season and stating that he could be major-league ready by 2006 or 2007 despite the interruptions to his development.

PECOTA picked up on his strong finish a bit—his 90th-percentile for this season was .275/.373/.494 with a .295 TAv and 25 homers in 560 plate appearances, but that's still not close to what he has actually done in 2010. There's a very real chance Bautista finishes the year with 50 homers. So what changed between the start of last September and this upcoming one?

Franklin Piliere had an excellent breakdown of Bautista's swing over at FanHouse, and it describes Bautista's newfound identity at the plate as something similar to what Albert Pujols does. That is not the same thing as saying Bautista is now like Albert Pujols, but it does go to show how much of a change there was from previous years on more than just a production level. The whole process is new—he stands closer to the plate by a few inches, which keeps him from being exploited in the same ways as years past. His timing, thus far, as been spot on, and allowed him to drive the ball with explosive power, and his hands being lower have allowed him to create more torque in his swing.

That's all a very good sign for Bautista's future, but it doesn't mean he's going to hit  this well again in the future. A successful season for the Jays right-hander means that more teams will be looking into how they can beat him in 2011, and they may not have to look far to see how they can nullify some of his progress. Let's take a look at some data from Bloomberg Sports Pro Tool. The first of these charts shows the types and location of pitches Bautista has hit homers on this year: 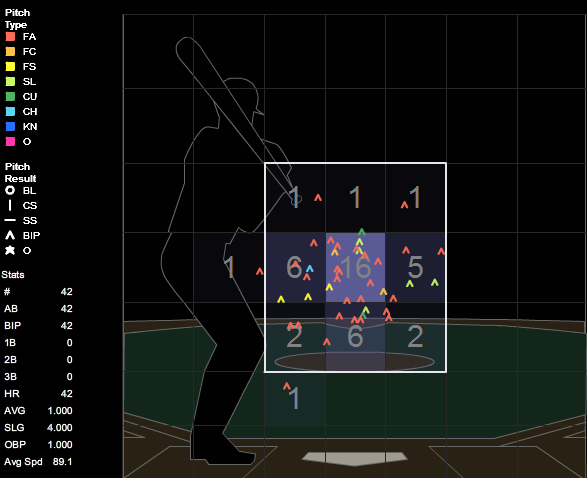 Most of these pitches are in the middle of the strike zone, right in Bautista's wheelhouse. You can't stop every pitch from going there, but more emphasis on the corners could help a pitcher out. Pitches on the outer part of the plate have gone out of the park with less frequency, but don't think it's because of a lack of power: Bautista has pulled every single ball he has hit for a home run this year, with the exception of one he hit to center field. Those pitches on the outer part of the zone were pulled and still landed in the bleachers. 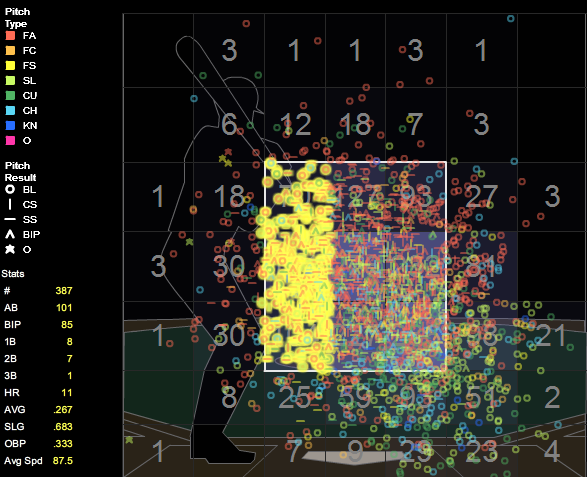 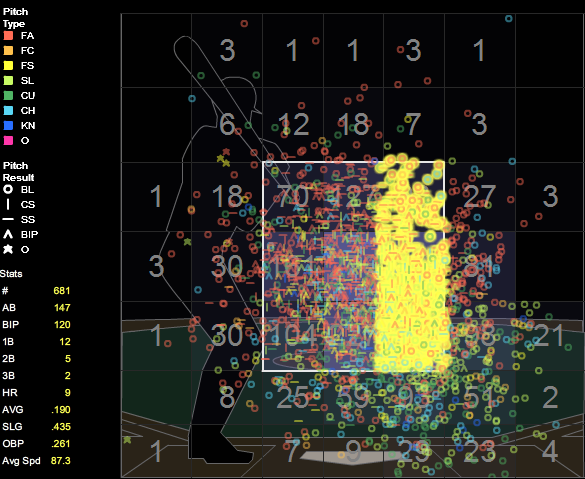 Bautista has hit .267/.333/.683 on pitches on the inner third of the plate—he doesn't see a whole lot of pitches there (just 381 on the year). On the outer third of the plate, though, pitchers have tried to keep Bautista in check. In 681 pitches (147 at-bats) Bautista has hit .190/.261/.435 with nine homers. There's still plenty of power, but he has not been as effective. If a hitter doesn't pull a ball on the outer portion of the plate properly, he is going to end up with a pulled grounder, something Bautista has done plenty of this year: 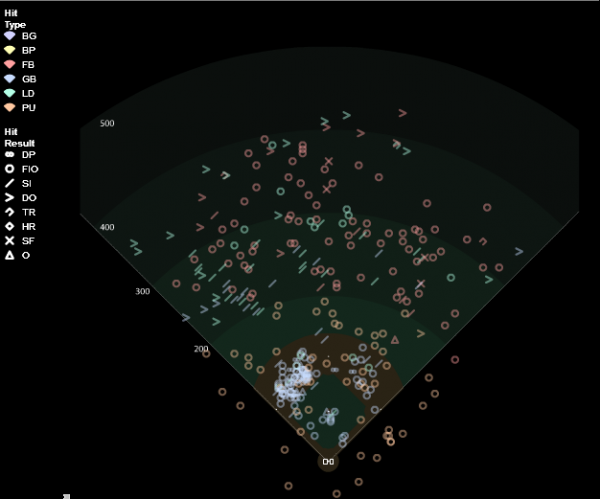 The ball just doesn't carry the other way off of Bautista's bat the way it does when he pulls it, and he hits a large number of ground balls to his pull side as well. If you're going to try to get Bautista out, the outer third of the plate is the place to focus—you're still going to give up the long ball, but if you can keep his average and on-base rates down, that won't sting nearly as much in the long run.

What can we expect from Bautista in 2011? There had been speculation that the Blue Jays might trade him since he figures to get a large raise due to arbitration but it now appears he will back with Toronto after such a monster year. It is worth noting, despite his legitimate improvements, the Rogers Centre (very friendly to homers, doubles, and triples for both right- and left-handers) has still been very, very good to him (.301/.434/.772, an OPS of 1.206 this year). Bautista has hit .237/.334/.490 on the road, which would still be his best season in the majors, and would still give him an ISO of .253, easily a career high. While there has been improvement to his game—possibly legitimate improvement, as demonstrated by Piliere's study on his approach and swing—and his development was delayed by injury and the Rule 5 draft, 2010 is still an aberration in the sense we won't see him do this again. Staying in Toronto would help ease the fall, of course, but betting on a repeat of a home ISO nearly as high as your road slugging percentage isn't something I would put my millions on.

You need to be logged in to comment. Login or Subscribe
nicholj
A very good analysis. As a Jays fan and owner of Bautista from the start of the season, I would add one observation, which is demonstrated in the data. The pitchers have already made their adjustment, as they now pound him on the outer third or off the plate. Using the data above, you can see that he is getting almost 2 pitches on the outer third for everyone on the inner third and I am certain if you repeated the exercise month-by-month the trend would show a pronounced shift in that direction.

The keys for Bautista going forward will be whether he will continue to lay-off pitches on the outer third until 2 strikes (his patience in that regard has been exemplary) and have so much success on mistakes in the zone. To me, it is the latter that will be difficult to repeat.

That said I am definitely enjoying his every at bat.
Reply to nicholj
Flynnbot
i have six long months to figure out whether he's a keeper or not.....
Reply to Flynnbot
biteme
Who ya gonna believe, Normandin or your lying eyes? I picked Bautista to have 40 HR's this year and I expect him to have 30+ homers each year for the next few years. He is not a one-year wonder.
Reply to biteme
biteme
Don't believe me?
: http://www.baseballprospectus.com/article.php?articleid=10585
http://fantasybaseball.fanhouse.com/2010/06/01/stud-or-shelton-jose-bautista/

Reply to biteme
draysbay
Normandin.
Reply to draysbay
mt99808
Interesting that as teams start to become more â€œawareâ€ of him he has put up off the charts slash lines the last 2 months.

Reply to mt99808
rawagman
Having watched Bautista all season has been an absolute pleasure. Whatever the future brings, this season was real. Jose Bautista has not been hitting fluky homers, he does not have "old player skills" and he is a dynamo out there.
AS few games ago, facing the Yankees, Ivan Nova brushed him back with a high and tight pitch in the early innings. Calamity nearly ensued. A few innings later, he took David Robertson deep. And he strutted his way around the bases.
Yesterday, in the 6th inning, Jeff Niemann drilled Bautista in the ribs with a pitch. During the same inning, with Lance Cormier now pitching, he took a slider away for ball one, and when cormier brought it back over the plate, Bautista pulled it deep. No strutting this time, but he did a little bat flip - Jose remembers.
I have never seen a player this locked in, for this long, before. It's awesome.
Reply to rawagman
dtoddwin
Great piece Mark. I wrote something about Jose two weeks ago:

Reply to dtoddwin
antonio
Jose has had a wonderful season, and has been a joy to watch, but I don't think AA will break the bank for him. The GM is on a long-term rebuilding plan and the Jays still aren't good enough to beat the elite teams in the AL East. I'm guessing he either (1) goes the arb route with Bautista (preferably settling on a figure), then deals him at next year's trade deadline (or takes the draft picks), or (2) signs him to a three-year deal (if the team and Bautista can come to terms). But I would be surprised if he offers Jose more than three years, $30M or so.
Reply to antonio