In case you missed Maury Brown’s caffeine-fueled tweet binge last Wednesday, the Rangers’ ownership-transfer fiasco is finally (and mercifully) over. After months of endless negotiating and maneuvering, the group that was supposed to get the team all along—led by Pittsburgh lawyer Chuck Greenberg and former Advil pitchman Nolan Ryan—ended up winning a day-long auction, beating out a rival group headed by Mark Cuban. The team is now officially out of bankruptcy, off of MLB’s dole, and presumably ready to start running normally again.

But what can we actually expect from this new ownership group, at least in terms of payroll spending? Putting aside the special circumstances in this case, how much do new owners generally spend in their first few years at the helm, relative to the groups they’ve replaced?

We’ll do this the simple way first. I took each team that’s been sold in the last 20 years, and found their average Payroll+ for the three years prior to being sold, as well as the three years following (teams that have been sold in the last three years are obviously excluded). Payroll+, as you could probably imagine, is the team’s payroll divided by the league average payroll, multiplied by 100. The Yankees’ Payroll+ last year was 227; the Marlins’ was 41. Pretty simple.

Here’s how we’ll figure this out. Using revenue estimates from Forbes, we’ll find each team’s Payroll/Revenue+—in other words, what percentage of its revenue did each team spend on payroll, and how did that compare to league average? The 2008 Tigers—who added a ton to their payroll only to win 74 games, in the midst of the automotive industry’s Armageddon no less—spent almost 80 percent of their revenue on player salaries, leading to a decade-high P/R+ of 163. The 2006 Marlins, on the other hand, spent only about 13 percent of their revenue on payroll, coming in at a decade-low P/R+ of 26.

As it turns out, there’s a reasonably solid negative correlation between a team’s P/R+ in the three years prior to being sold, and the change in their Payroll+ after being sold (R = -.53). In other words, teams that are spending below their capacity do in fact tend to raise payroll, and teams that are above their capacity tend to cut back: 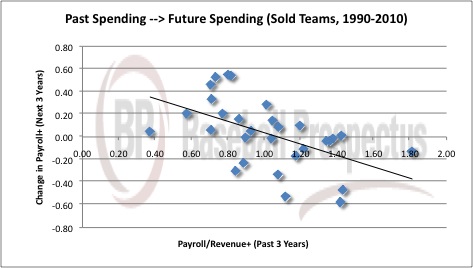 But this isn’t just true with teams that are being sold; in fact, it applies to all teams, albeit with a slightly weaker correlation (R = -.47): 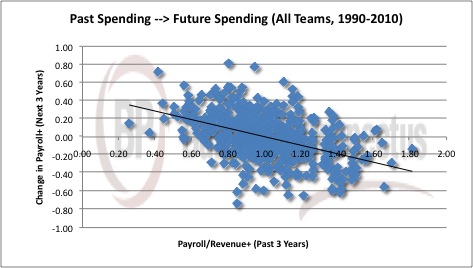 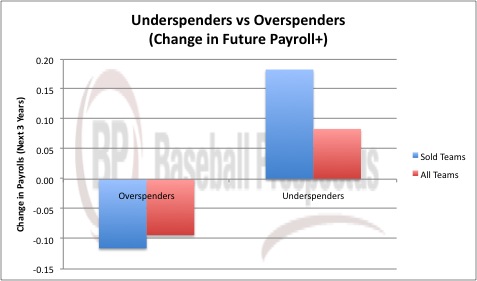 Now there’s something. New owners are more extreme on each side—those that take over underspending teams tend to increase their payroll more than a normal owner, and those that take over overspending teams tend to cut more. The former is especially true: When a new ownership group takes over a team that has been spending below its capacity, it tends to raise the team’s Payroll+ by 18 points on average, whereas existing owners only did so by eight points.

Breaking it down even further, we can see how consistent this effect really is. Here’s the same chart, separated out by teams that spent just a little above or below average, and teams like the ‘08 Tigers or ‘06 Marlins who were far above or below their respective capacities: 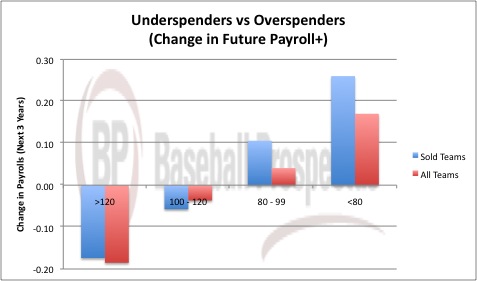 So when a new owner buys a team that has been overspending, he/she acts pretty much like any other owner, and cuts payroll until the team is back within its means (average Payroll/Revenue+ the first three years under new ownership: 103). But a new owner that takes over an underspending team will go above and beyond, adding significant amounts to the team’s payroll until the club is actually overspending (107 Payroll/Revenue+).

And that takes us back to the Rangers, who haven’t had an above average Payroll/Revenue+ since the end of the A-Rod era in 2003, and have been in the bottom 10 every year except 2006. This year, they’ve actually bottomed out, coming in ahead of only the Padres and Pirates (which shouldn’t be much of a surprise, considering they had to take a loan from MLB just to make payroll).

All told, based on a regression of the past 20 years’ data, we should expect the Rangers’ Payroll+ to increase 15 points in the next three seasons. That would take them from 77 to 92—still below average, but far more respectable, at the very least. If we use 2007-09 instead—given how anomalous this year has been in a thousand different ways—we’d expect them to go up 11 points, from 85 to 96.

Regardless, payroll should be going up by a pretty significant amount. And in general, if your team is drastically underspending (what’s up, Dodgers fans?), a sale is usually a pretty good cure.

(Side note: Maury has some court documents that the Rangers filed that have their actual gross income numbers for 2008 and 2009. Forbes was $23 million high in 2008 and $9 million high in 2009, but I’m not sure how much that actually means—Forbes estimates post-revenue sharing numbers, whereas I think these are pre-revenue sharing numbers, so this probably isn’t the best way to evaluate the magazine’s numbers.)

You need to be logged in to comment. Login or Subscribe
ScottBehson
I'd love to see all MLB teams ranked by Payroll+ and Payroll/Revenue +. Maybe a future article ( or just a handy chart?)
Reply to ScottBehson
Richie
I should think you'd want to control for record. If teams sold average, say, 77-85, would you then expect them to raise payroll as they revert to the 81-81 mean? I understand your sold/unsold comparison may account for this somewhat.

You read often of teams shedding payroll prior to being sold. I've always suspected this is some accounting value thing. But is there some type of effect here? Do teams for sale have payrolls lower than you'd expect given their other characteristics? If so, might this account for near all the effect you find regarding subsequently raising payroll?
Reply to Richie
TheRealNeal
The conclusions are interesting, but I trust the Forbes numbers about as far as I could throw the annual revenue of the Marlins.
Reply to TheRealNeal