After the Rays’ loss Thursday afternoon, the Yankees reclaimed first place in the American League East. The Yankees’ middling play over the last week and a half (5-5 in their last 10 games) opened the door for the Rays to make a run at first place. Tampa Bay, after all, has taken six out of 11 from the Yankees so far and has allowed the fewest runs in the American League. Does that mean we’re back to the days of bizarro baseball and small-market superiority?

Let’s handicap this one, category by category. As a team, the Yankees have a .270 TAv (fourth in the majors). The Rays are not far behind, however, at .268. The Yankees have the sixth-highest team defense (by PADE), but the Rays rank even higher at third. These numbers demonstrate just how close these two teams are to each other in skill. Let’s turn, however, to the pitching staffs of the two teams.

The following chart shows the five regular starters for each team, ranked by 2010 SIERA (in parentheses).

The peripherals of the second-, third-, and fourth-best starters on each team this season have been of equal quality. Pettitte has landed on the disabled list, but ought to be back after a few more times through the rotation. He can’t be expected to be nearly as good down the stretch as he was before getting sidelined, however: per nine innings, he has walked three and struck out seven. Sabathia, whose peripherals look disturbingly similar to Pettitte’s, has found almost as much success, though Sabathia has the superior track record to fall back to. For the Yankees, the big question mark has to be Burnett. He has a reputation for disaster starts, but he has been snake-bitten by a BABIP 20 points higher than his career norm whose impact is multiplied by his ground-ball tendencies.

Two of the Rays starters have well over-performed their peripherals (Jeff Niemann and David Price), while their Opening Day starter—James Shields—has drastically underperformed his. Matt Garza’s tantalizing potential has never been on better display than it was during his recent no-hitter, but his peripherals have suggested inconsistency just as much as his relatively pedestrian ERA—his SIERA and ERA are identical.

In fact, the Rays’ fortunes have been as inconsistent as Garza himself. The chart below shows trends in the two teams’ runs scored and runs allowed through Thursday morning. The chart makes the benign assumption that the teams play their games in sequence at the same time, so the games behind figures may not match the exact newspaper numbers. 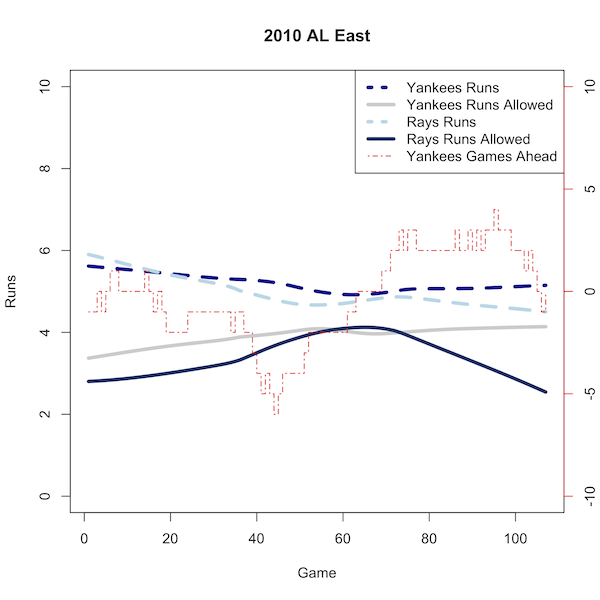 The two respective lines for the Rays start out far apart (demonstrating early success), converge around mid-May, and then spread apart again about a month after that. Notice that the thin red line (read from the right-hand axis, representing the advantage the Yankees enjoy in the standings) goes steadily up during that period of Rays weakness. Recently, however, the Rays have pulled back while the Yankees have stayed relatively flat. Lately the Yankees have been averaging about a half-run per game more than their opponents, more or less the rate they’ve enjoyed since mid-June.

The question is how the two teams will perform for the rest of the season. Given that they are so evenly matched, the outcome of this particular race will come down to health and matchups. Even though both teams are very likely to make it into the playoffs (Yankees at 84 percent, Rays at 89 percent—thanks Bud!), this will nevertheless be an exciting race. Of the seven games remaining, four will take place in the Bronx, and the outcome of those games could very well tip the scales in the AL East. But of the out of division games, the Rays have series against the Tigers, Rangers, Athletics, and Angels (x2) before finishing with 10 games against the Mariners, Orioles, and Royals.

The Yankees, on the other hand, have a marginally easier interdivisional schedule (Rangers, Royals, Tigers, Mariners, White Sox, Athletics). However, they finish with 21 games against five teams of which all but one (the Orioles) is in the top seven in AL third-order winning percentage. That’s a formula that could spell a late-season surge by the Rays. While the Rays play three of the worst offenses in the AL, the Yankees will have to face nine games against the Blue Jays and Red Sox, teams that would likely make the playoffs in any other division.

This is a division in equipoise, and the differences between the two teams are very small compared to the things they have in common. They have deep pitching rotations that limit baserunners and allow the superb defenses behind them to field balls in play. Both teams are adept at getting on base, although the Yankees have slightly more power. The Yankees have the best closer in baseball history, but the Rays have an effective bullpen led by Rafael Soriano and Joaquin Benoit, and in fact the latter of those has had the best year of any reliever on either team.

While it’s undoubtedly good for the playoffs that both of these teams look set to play October ball, I can’t help but consider what the next 50 games would be like if there were no wild card. This would be an old-fashioned dogfight, and those seven remaining match-ups would be the brightest of marquee dates. Even without the high stakes, baseball fans should enjoy the spectacle of the two best teams in baseball in a mad dash to the finish line.

You need to be logged in to comment. Login or Subscribe
hotstatrat
"Old fashioned" to someone my age would mean that it made a difference between going to the post season or not. Those pennant races between "best" teams fighting a 162 game battle to the death hardly exists anymore. It could happen in the A.L. East if the Red Sox got into the game and made this a three way battle. Another way it could happen as I believe it happened in the NL a few years ago with the Phillies' and Rockies' thrilling charges to their division titles would be if there are pennant races in two equally strong divisions at the same time.

That's the ONLY possibility allowed by the wild card scheme and that's why I have always been against it and hope it will go away.
Reply to jerrykenny
krissbeth
Superb defense for the Yankees is a bit of a reach: they're 6th out of 14 teams. That's above average.
Reply to krissbeth
Oleoay
I think the Rays can better withstand injury than the Yankees can. It's not like the Rays would use Sergio Mitre as a backup starter if one of their starting five went down.
Reply to Oleoay